Before trudging into the snows of Sons of Winter, here’s where this review will stand on spoilers. Anything from the previous three Game of Thrones episodes I consider to be fair game (so be warned of that if you haven’t yet played those.) The events of episode four will obviously be alluded to, since it’s a bit hard to review it otherwise, but I’ll steer away from saying things like “Gosh, it was surprising when all those named characters died, eh?”

With all that said, let’s get on with how Telltale has handled the extended middle portion of this six episode series. I’ve dubbed Sons of Winter the Sloppy Smoochy Romance Episode, because most of the screenshots I took happen to feature people kissing. Or appear compromising enough that I can pretend the characters in it were secretly about to kiss, anyway. 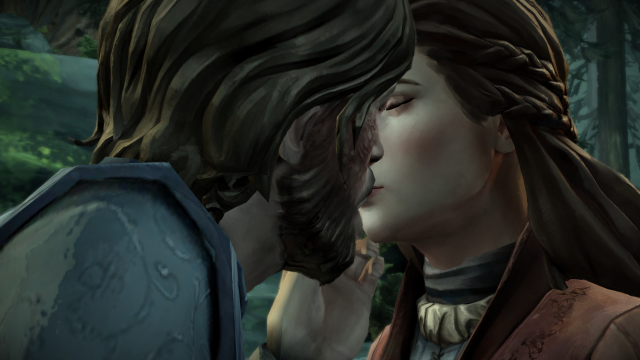 Away from my weird and possibly slightly perverted screenshot fantasy land, episode four has, of course, its fair share of grim moments. Fewer than episode three though, which kept threatening to turn into some kind of Forrester-themed snuff film. Aside from a spot of match-making, Sons of Winter features quite a bit of deal-making, brinkmanship and scheming. Mira Forrester in particular gets to cash in some of her knowledge chips at the bargaining bank down at King’s Landing.

There also seems to be a greater emphasis on QTE-tastic action sequences this time around, as both Gared (in a spot of bother after killing a total pri … sorry, “sworn brother” in the last episode) and Asher get a full sword arm work-out during their respective sequences.

Anyone (like myself) who felt the unrelenting Forrester misery was getting a little bit close to Game of Thrones parody in the last episode will find some relief in the opening few chapters of this fourth episode. It’s a brief moment of victory, and one superceded by other problems for the Forresters by the episode’s close, but a necessary reminder that Rodrik doesn’t have to spend all day every day getting kicked in the face by petty tyrants in positions of power. 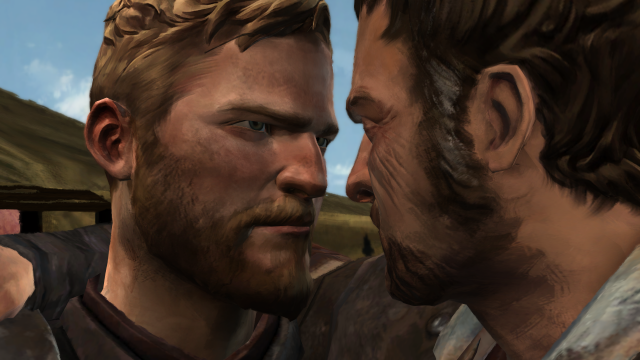 Speaking of which, there’s an effort to humanise the Whitehills in this episode which, while an admirable effort, falls rather flat. Mostly because they’re straight back to being irredeemable again within about 30 seconds.

In fact the road which leads Rodrik and company back to talks with Ludd Whitehill (he’s the main Lord, the one who sounds like a gruff, Northern football league chairman circa 1970) is a bit contrived in general. As a purely climactic set-piece it works fine, but the decision for any of the Forresters to be anywhere near Ludd Whitehill to begin with (even with Ryon still a hostage) is a pretty baffling one. It’s one of those inevitable pieces of Telltale “well, we need these characters over here now” railroading that relies on the Forrester characters swallowing the highly unlikely line that maybe Ludd will be worth hearing out this time.

After three episodes of horror (and a prior Mira segment which directly shows the Whitehills to be disingenuous,) most players will probably have been looking in vain for the “fuck Ludd Whitehill and his invitations” dialogue option.

The ‘Forrester traitor’ thread also remains dangling throughout this episode. I’m a little worried about where this plot point is going, because none of the suspects seem all that promising. Telltale keeps pointing players towards one of the two potential Forrester sentinels (which … could just about add up, with some unsatisfying fudging,) but veterans of TV detective shows will probably be casting suspicious eyes at either the Maester or Elissa. Either one could be an interesting (or disappointing) traitor, depending entirely on how the motive is revealed. 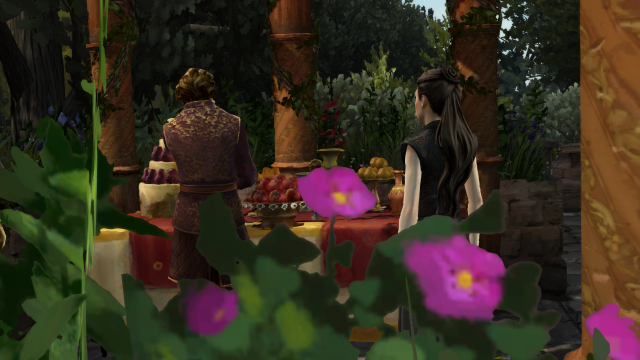 But while the main Forrester track remains a bit of a quality roller-coaster, Mira’s progress at King’s Landing has been on an aircraft take-off trajectory. What began as (semi-decent) handmaiden intrigue has blossomed into a full-on attempt to manipulate the goings-on among the lower members of court. Episode four features an eavesdropping mini-section which made me realise I’d probably be happy with a full game of uncovering and protecting information, complete with deciding which friends to burn along the way in order to achieve my goal.

Game of Thrones is a series in which characters are regularly called to decide between their long-term aims and staying true to their friends of principles. Mira is getting dragged further into this world, but has the chance in this episode to play it like a champ.

Over in Meereen (or rather, in a tent somewhere near it,) Asher and Beskha are just some more useful sell-swords in Daenerys’ grand plans for slave liberation. Emilia Clarke reprises her role from the HBO version, and does a strong turn as a largely-disinterested Queen who’s above the concerns of these scruffy newcomers to her court. Lots of great eyebrow-acting, there.

Ultimately, this prompts a “just like old times” style sabotage mission, in which Asher, Beskha and Croft (the chap from episode three with one eye who’s basically Zaeed from Mass Effect) get to exchange one-liners and Press E to make a Meereenese guard’s chest explode. Oh, and Beskha also gets to explore some deep-rooted childhood issues. Which is rather less like an 80s action movie, but does wind up as another of those ‘do you choose the mission or your friend’s needs?’ situations. 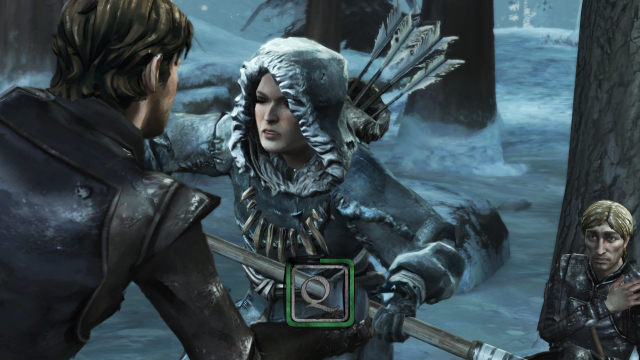 Rapidly press Q to end these hostilities and move on to smooches (while Cotter looks on in horror.)

Up North, Gared gets to carry the torch for a time when Telltale games had puzzles in them. Not only does he have to combine some basic objects to escape from a cell (don’t get too excited, it’s not hard,) he actually gets to use some of the inventory items he’s been carting around for three episodes. Again, this wasn’t really a puzzle, but I did get irrationally excited when it dawned on me what was happening. There’s also some development and pay-off to Cotter’s revelation in episode three that he’s actually a Wildling.

Mid-period episodes in this type of game series are pretty difficult to assess, because so much of what happens in them (as in episode three) will probably end up looking better or worse in retrospect. What may feel like padding could actually be the groundwork for an ingenious pay-off, and moments which seem hugely relevant in the context of episode four may turn out to be fairly insignificant (or just wasted) further down the episodic line.

As a stand-alone episode, Sons of Winter seems to slot pretty nicely into the series progression. It provides some mini-conclusions to certain sub plots, opens up others for the final two installments, and continues the main ‘It’s a bad time to be a Forrester in Westeros’ arc. Though Game of Thrones doesn’t hit the same heights as the first season of Telltale’s Walking Dead (probably because several key writing staff left the company after that game concluded,) it’s well performed throughout, and still has enough character and narrative hooks to keep me interested in where it’s going.