Telltale’s foray into the Game of Thrones universe opens at the Red Wedding and doesn’t get much cheerier from there. A handful of minutes in and there’s already been enough family tragedy to fill an entire season in most other media; but Game of Thrones is a series which thrives on the misuse of power, and the hopeless causes of those who suffer its consequences.

House Forrester, a passing reference in George RR Martin’s Song of Ice and Fire books, find themselves largely on the latter end of that scale. Telltale’s episodic spin-off from HBO’s series adaptation fleshes out the members and politics of this House, providing both a narrative focal point and multiple playable characters. 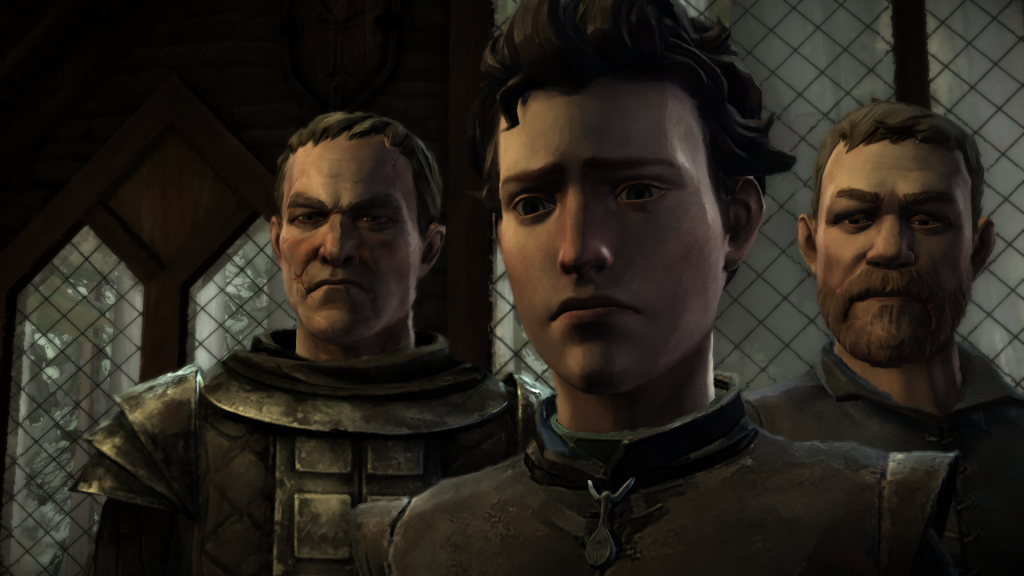 The episode kicking off on the fringes of the Red Wedding (one of, if not the, major turning point of the series to date) should be enough of a clue that Telltale’s series is primarily intended for those who are already familiar with Martin’s books, the HBO show, or both. Unlike The Walking Dead, I wouldn’t really recommend this game for people unfamiliar with the source material.

It occasionally makes efforts to incorporate confused newbies with slightly-too-on-the-nose bits of exposition along the lines of “gosh, aren’t people keen on backstabbing one another here in King’s Landing,” but, overall, assumes a level of prior Game of Thrones knowledge that people starting fresh simply won’t have. You might be able to muddle through, but would spoil a whole lot for yourself in the process.

This version of Game of Thrones begins at the conclusion of HBO’s third season (around the middle of the third book) with the intention to span the fourth season and finish up around the start of the fifth. So if you’re not suitably caught up, expect the plot to be interwoven with events you haven’t yet witnessed. 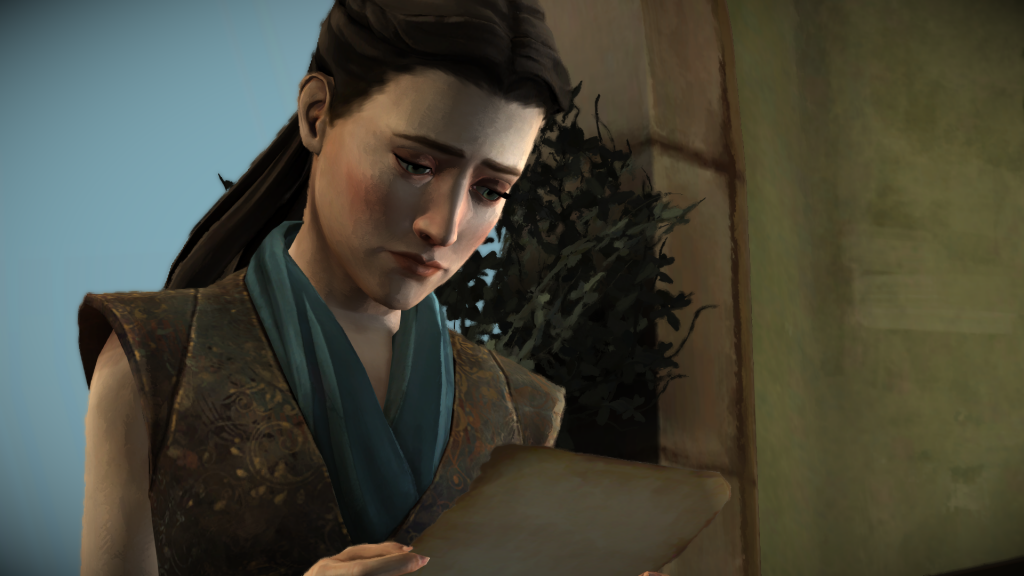 The series feels like a solid fit with the contemporary Telltale ‘dialogue dilemmas’ formula, because so much of it revolves around diplomacy (both open and covert,) power politics, and the kind of linguistic tricks where a person casts aspersions while appearing to offer flattery. Episode One, Iron from Ice, gives the player plenty of opportunities to engaging in quick-witted word play, putting them under added pressure with a response timer that seemed (to me) to be ticking down even more swiftly than in prior games.

House Forrester were loyal Stark bannermen, who now need to contend even more fiercely with rivals the Whitehills. The Whitehills are in with the Boltons (the rising power in the North,) and have renewed belief that they can lay claim to the Forrester’s Ironwood trees, an important economic resource for the realm.

This Ironwood angle also gives Game of Thrones some of its legitimacy in bringing in major players from the HBO series. The Crown wouldn’t give much of a toss about House Forrester, but they certainly care about a regular supply of high quality shields, warships and the like. 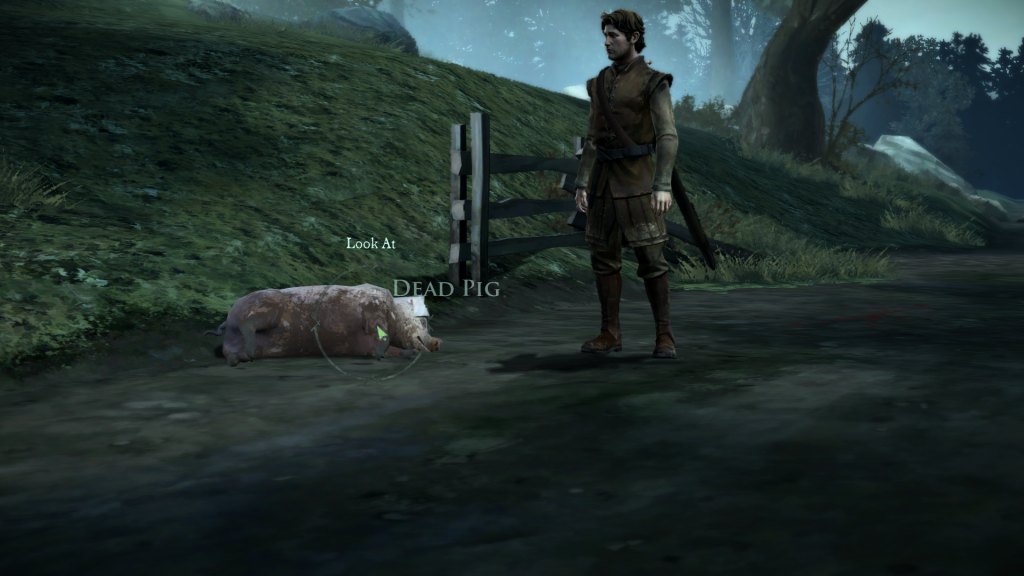 All four of the cast members present in this first episode put in solid performances (a relief after Peter Dinklage’s weird turn in Destiny,) with Iwan Rheon’s Ramsay Snow stealing the show. Presumably so he can lock it up somewhere and flay it later. An audience with Cersei and her permanent bowel-discomfort scowl makes for a pithy war of words, but everything about Rheon’s Snow, a man who takes to reasoned diplomacy like a wild dog takes to ballet, radiates psychotic menace.

The ‘known’ cast are used sparingly, and with care. They’re spread around cleverly enough to prevent you wondering why Person X isn’t present at this meeting, and Telltale avoids shoehorning people in for no reason. There’s a lone moment where Tyrion’s presence could perhaps be scrutinised, but it’s justified pretty handily. And, honestly, is there such a thing as an excess of Tyrion?

Game of Thrones also does an impressive job introducing a significant number of new cast members in the form of the Forresters, their general household, and their rivals. The main Forrester family have some rather Stark-esque parallels (both superficial and more substantial,) but aside from the slight sense of familiarity this doesn’t hurt their characterisation. I can already tell you more about the Forresters who get offed at the Red Wedding (about 30 seconds into the game) than I can about some of the later hangers-on in The Walking Dead Season Two. 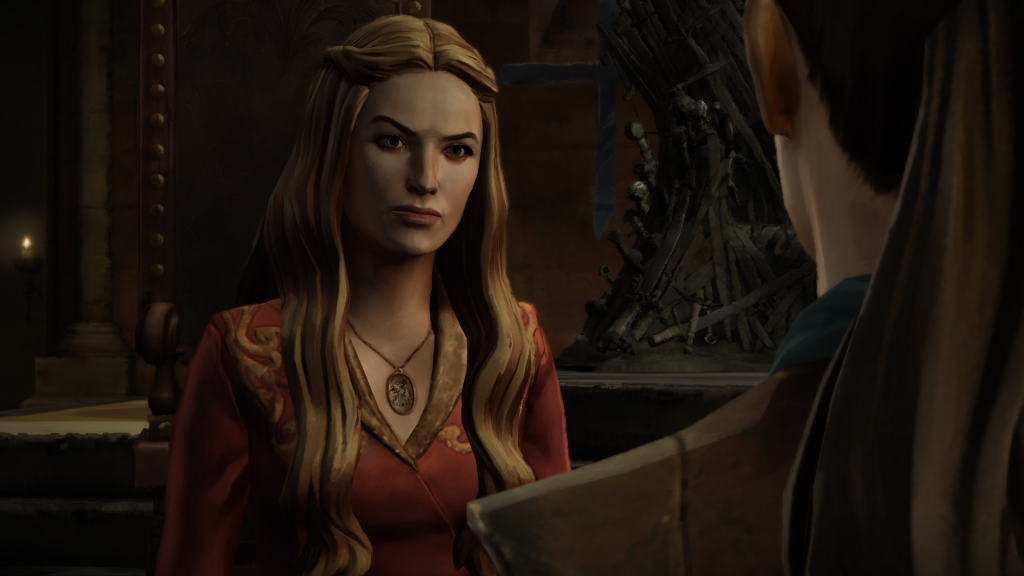 Frown at me all you like Cersei, I’m still not going to say “Joffrey is the super double-best King in all of history.”

Strength of character and narrative are pretty vital for Telltale titles these days, as they’ve pretty much given up on being traditional (or even non-traditional) adventure games. I don’t think there’s anything in this first Game of Thrones episode which could be mistaken for anything resembling an object-based puzzle. Though, oddly, there were several moments where either Gared, Ethan or Mira (joint protagonists for this release) could pick things up. Presumably they might be useful in later installments.

Quick-time Events, Telltale’s more recent gameplay staple, are used pretty sparsely in this one too. There’s some dodging under carts and QTE sword-fighting front-loaded into the episode, plus what now seems to be a traditional “hammer a button to do something to a horrible wound” scene, but not much more besides. The majority of the time it’s the rapid dialogue choices that are providing the nerve-wracking action; which is a statement I genuinely intend to come across free from sarcasm.

Of course, a replay of this episode’s hearty two hour running time will reveal that Telltale’s emphasis on choice is, as ever, a clever illusion (you can alter minor events, but the big dramatic thing in this episode will happen to everybody.) Even though I continually wish for a Telltale series that will get bolder with the branching decisions, I’ve just about made peace with the fact that this is just the way things are in these titles. The structure even seems somewhat more appropriate in the Game of Thrones universe, where characters continually find themselves in impossible situations. In this setting, no matter what you do or how clever you are, the outcome will sometimes be the same. 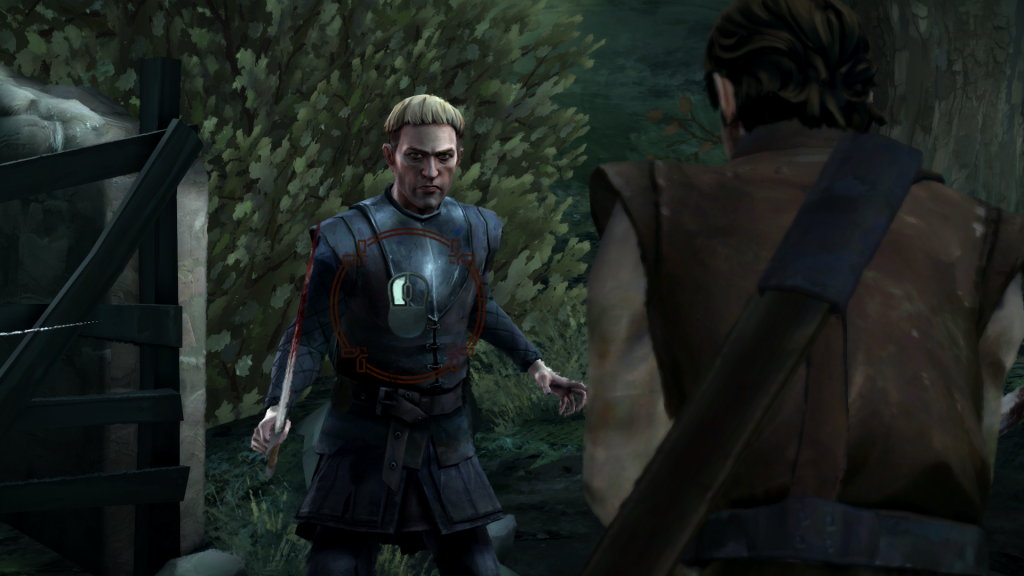 Though the Telltale formula remains the same as the past couple of releases, the team has made some interesting choices with the art style. Their game engine isn’t getting any younger, but Game of Thrones employs an interesting approach with softer 3D characters on backgrounds that look a little like Impressionist oil paintings. In close up, this generally looks terrific. But longer shots suffer from a flatness, which makes it appear as if some of the textures just haven’t loaded in properly. Nowhere is this more apparent than in the episode’s re-creation of HBO’s much lauded opening sequence. The effort is appreciated, but it doesn’t half look rough in some spots.

There’s also a touch of the uncanny about the ‘real’ people in the game. They look fine while static, but something about Telltale’s in-engine animation and the disparity between real and rendered expressions kept sending minor alarms to my brain. On a more positive artistic note, Telltale seem to have learned a lot about creatively framing ‘directoral’ style shots from The Wolf Among Us, and apply a few interesting perspectives throughout Iron from Ice. 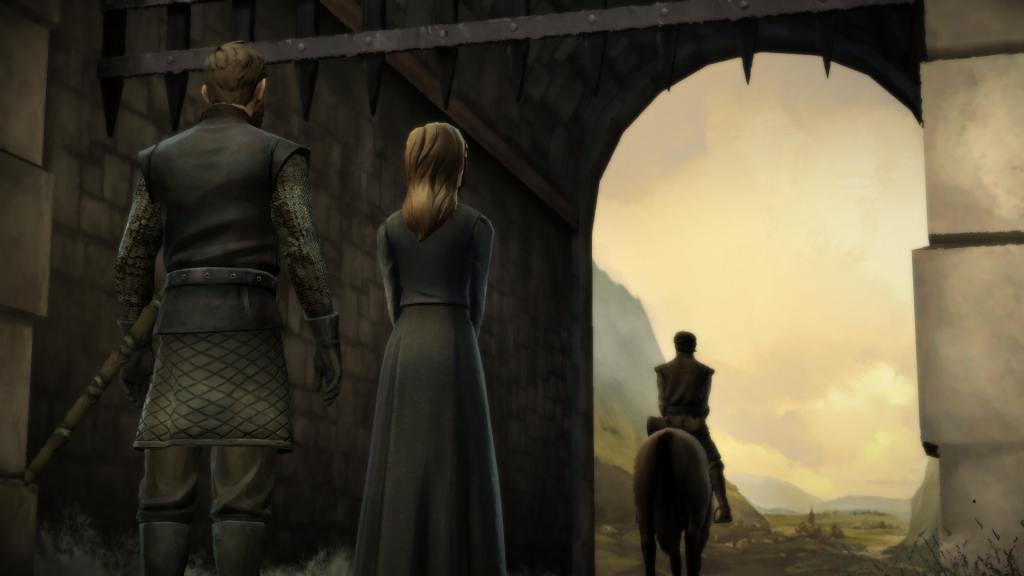 Okay, it’s not Kurosawa or anything, but this is a lovely shot.

Prior to its release, my main concern about Game of Thrones was that it risked feeling like an unnecessary, bolted-on piece of fluff with little influence or connection to the known story. Instead, it’s taking shape as an interesting sub-plot that runs concurrent to (and also overlaps) the established narrative most players will already be familiar with. Andrew Grant (previously co-credited on the first episode of The Walking Dead Season Two) is given the main writing credit for Iron from Ice, and on the strength of this episode I’m hoping he’ll be a recurring presence on the writing team.

The series themes of power, feudal class politics, court diplomacy and family are all well represented in the microcosm of House Forrester, whose tale appears as if it will be smartly interwoven with the events of the wider realm (and beyond.) While it doesn’t do anything to advance Telltale’s now-established formula in terms of gameplay mechanics, Game of Thrones has strode out to an impressive start as an expansion of the source material.

EA claims to have a “special announcement” for The Game Awards