You’ve got to hand it to Cyanide, the French developers certainly know how to secure a popular license. First they wrangled the rights to make a series of Blood Bowl titles, even after the notoriously protective Games Workshop launched a lawsuit over the rather-too-much-of-an-homage-for-comfort Chaos League; and then they somehow wound up with Game of Thrones.

Placing such a huge property in the hands of a (relatively) small developer comes with its attendant problems. A lack of budget afflicts this third-person RPG like a creeping malady, working its way into almost every aspect of presentation (particularly the voice acting) and eating away at the positive work being done elsewhere. But while a larger developer with big-money backing might have ramped up the spectacle, their natural inclination towards more conservative storytelling may have resulted in a more straightforward tale than the one presented here.

Game of Thrones has several problems as a game, but its major strength is a story that largely succeeds in interweaving with George RR Martin’s established narrative while not overstepping its boundaries or drifting into awkward fan-fiction territory. Its plot runs parallel to the events in the first book of the series and HBO’s opening TV season, so it’s fairly important that you’ve read or watched at least one of those. If not, the endless scheming and counter-scheming of powerful medieval-fantasy Houses could be a touch on the confusing side. 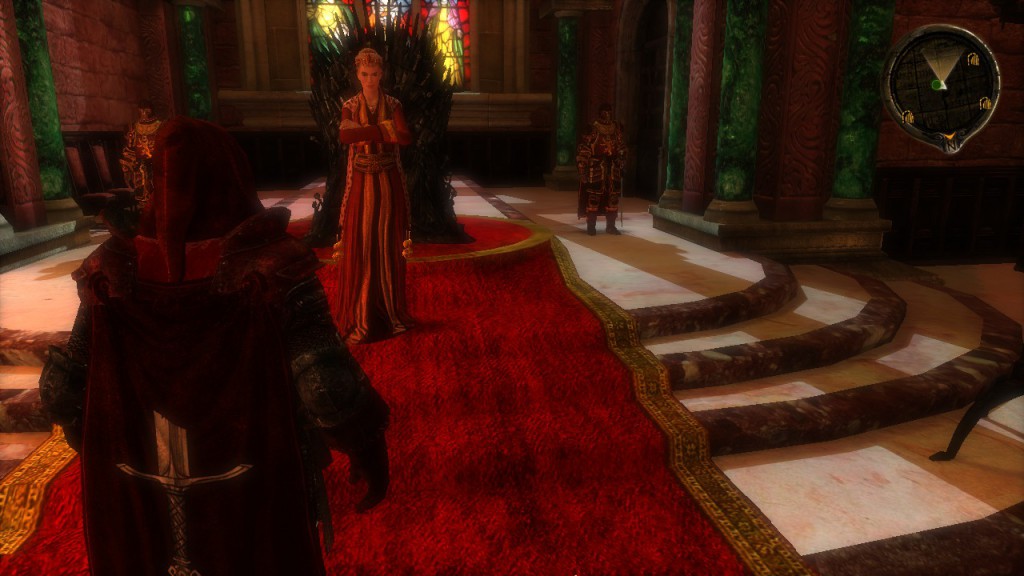 Cyanide’s Game of Thrones introduces two new characters who pursue goals that are ‘off camera’ for the books and series (though a few established faces; Queen Cersei, Lord Varys and Jeor Mormont do show up). Both of these newcomers fought for the Lannisters in Robert’s Rebellion against the totally nutzoid King Aerys II Targaryen (see, if you don’t know the series this is difficult stuff) and both now find themselves in circumstances quite different from feudal military service. Mors Westford is a grizzled old crow of the Night’s Watch, while Alester Sarywck is returning to his birthplace in Riverspring as a Red Priest.

These two are an unusual pair for a videogame; older, morally compromised men with a rigid honour code (Mors) and a new-found religious enthusiasm bordering on the fanatical (Alester). For a little over half the game you alternate between playing as Mors or Alester, before the pair meet up for the concluding chapters of the tale (that’s not exactly a spoiler, it’s pretty well telegraphed that they’ll end up together). This interchange is handled well and works as a structural device in-keeping with Martin’s ‘point of view’ chapters in his books.

In another unusual step for the videogame narrative, these two ‘heroes’ have very different aims and ambitions. As do the two main antagonists, whose mendacious plotting and back-stabbing is for contrasting ends. Again, this is just as it should be for a series which prides itself on ethical grey areas and the pragmatic demands of power. 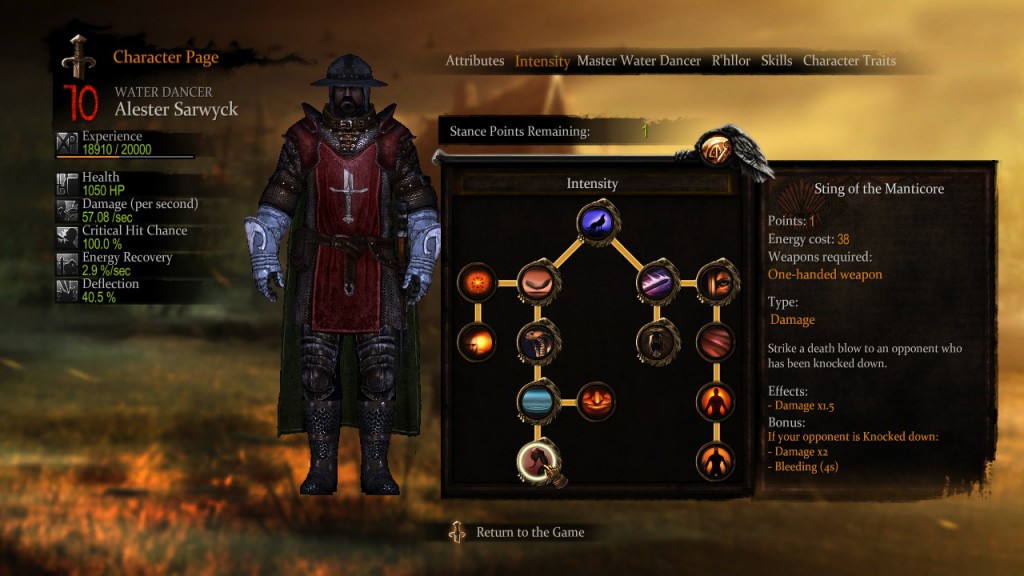 Unfortunately, this robust story rope is frayed to near breaking point by some abysmal voice acting and uninspired level design.

Our two protagonists are not really to blame (Mors’ gruff delivery improves as the game wears on, and Alester is unspectacular but just about acceptable), nor are the HBO guest voices (although Jeor and Cersei are phoning it in a bit, with only Varys’ melodic tones really delivering the professional quality you’d expect); but the supporting cast bring a collection of performances ranging from flat to borderline unlistenable. That includes an ill-advised, in-jokey appearance by George RR Martin himself.

Weak deliveries, misplaced emphasis and terrible, wandering accents are just some of the delights the cast of Game of Thrones has in store for you. If it weren’t for the halfway decent talents of the main pair and Varys’ splendid cameo appearances, I’d have recommended simply muting the voices altogether. It doesn’t help any of the actors that the lines appear bereft of any kind of post-production Foley treatment. These are the sounds which add convincing background effects when a character is, say, stood in a snowstorm versus inside an echoing castle hall. Here, no matter what the circumstances, everyone sounds like they’re inside a cosy sound studio (because they are).

This poor voice acting undersells some reasonable dialogue and gives the story a cheap, unconvincing feel that it doesn’t really deserve. 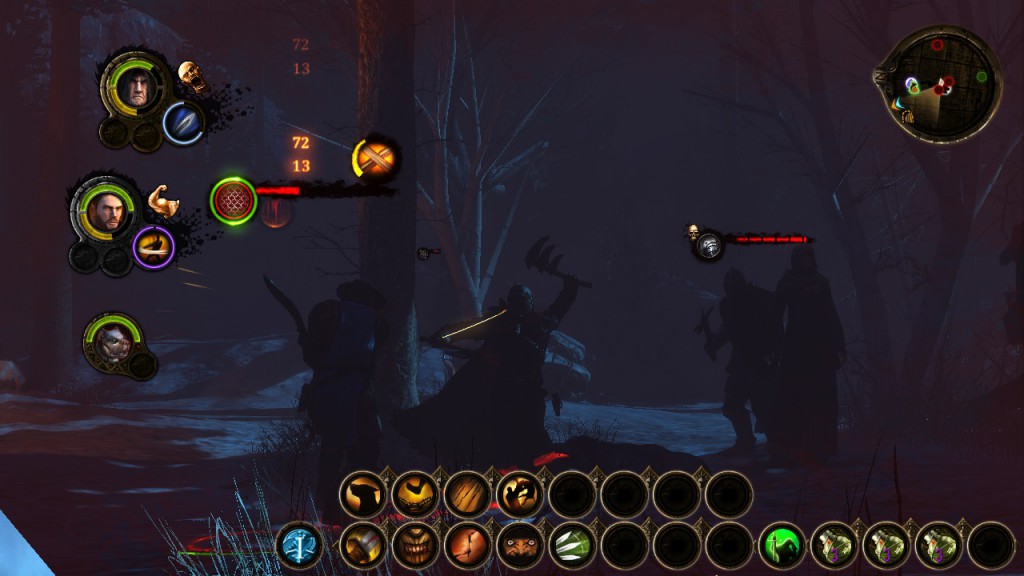 The cramped level design works for areas like Castle Black (which isn’t exactly supposed to be massive) or the Sarywck seat of Riverspring, but fans of the series will probably have a hard time believing that the city of Kings Landing outside the Red Keep consists of about five merchants and roughly the same number of streets. None of these iconic places (aside from The Wall, which is fairly well presented) are really done justice by the developer’s less than impressive use of the Unreal Engine 3. For a series with so many worthy sights to offer, far too much time is spent in boring, dank underground tunnels.

When not wandering around narrow streets, playing voice-acting Russian roulette, or warging into Mors’ dog for some scent-chasing pseudo stealth sections, your time will be spent in combat with the various Wildlings, sell-swords and Knights who populate the realm.

The combat system owes a fair bit to older PC-centric RPGs where pausing the action and issuing orders was the norm. Here, time just slows to a crawl rather than pausing outright, but the process of assessing your situation and queuing up relevant skills remains just the same. Mors’ and Alester’s skills are class-dependant (you choose one of three classes for each character at the start) but every path can deal out useful debuffs along the lines of ‘immobilised’, ‘stunned’ and, best of all, ‘on fire’. Each armour type also has a weakness to a certain type of weapon, so it’s worth paying attention to that when fashioning your tactical plan. Finally, a limited number of flasks can be filled with various concoctions to aid your characters or hinder your foes. 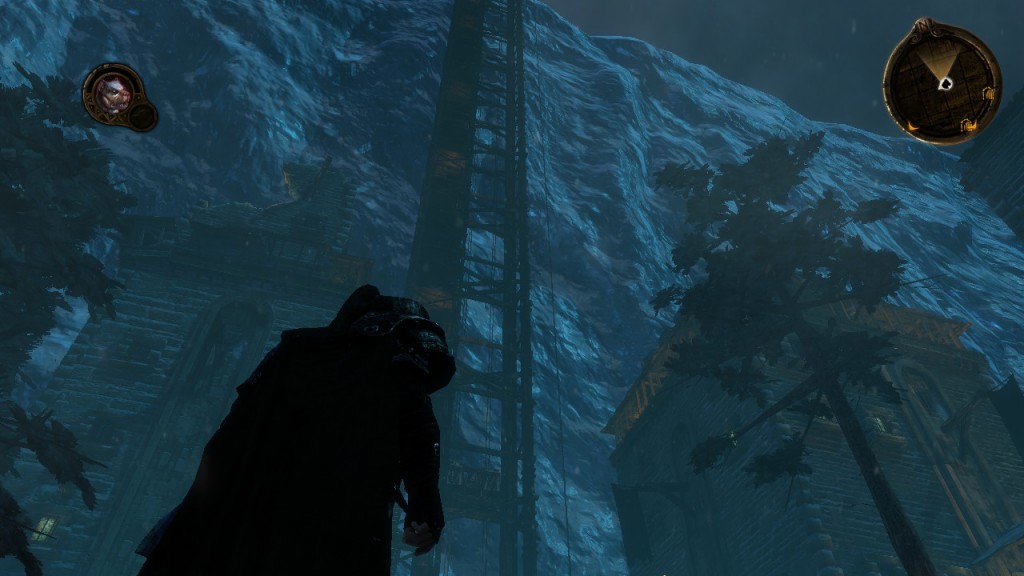 It’s a sturdy system, offering just enough tactical fluidity and challenge to force you into thinking your way through each encounter. The actual animations which play out with each skill are fairly wonky and awkward, but the intent is there and the combat succeeds in finding an interesting compromise between real-time and turn-based approaches. It’s not quite revolutionary or deep enough to remain interesting for all 25 hours of the campaign, as you hack through rank after rank of increasingly familiar men-at-arms, but new abilities (obtained through levelling up your characters) keep things fresh for longer than might be expected.

There are no dramatic branches to the storyline (at least until the finale), but choices you make throughout the chapters do tend to be reflected in dialogue or little set-pieces later on. Help a chap out of jail, and his gang might lend their support to you. Imprison some rioters in your dungeons and they’ll still be there later on. My only gripe with the narrative pacing is that it all begins to go wrong slightly towards the end, when Mors and Alester can suddenly fast-travel between locations in the North and South. This feels especially silly when you’re presented with  a couple of side-quests many miles away from your supposedly urgent, time-sensitive mission and are able to complete them as if nothing is amiss.

‘Game logic’ is also in full effect for a quest where you require a face-covering helmet, but for some reason none of the ones in your possession will do the job. Likewise, it’s pretty funny to hear your character express his distaste for looters when he steals from every corpse, chest and flower-pot (no, really) he can lay his hands on. 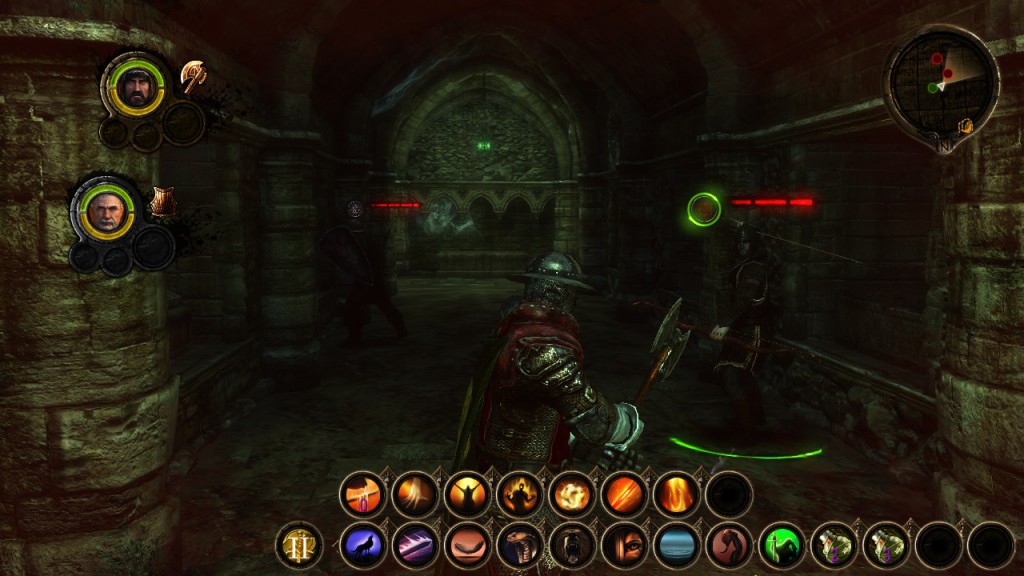 PC users should be warned that the game offers only the sparsest of graphics options, so delving into the config files to whip the Unreal Engine 3 into a shape of your liking is pretty much mandatory. Like everything else about this game, you have to put up with an unpalatable surface to get the best out of it.

There’s no denying that Game of Thrones will test your tolerance. There are so many negative idiosyncrasies and cost-cutting measures in place that you’ll probably start to wonder when the game will just fall part entirely. But it never actually does. In fact, it stays on course to deliver a compelling parallel narrative to the opening book and HBO series, with characters as morally ambiguous and events just as horrific as any from Martin’s pages.