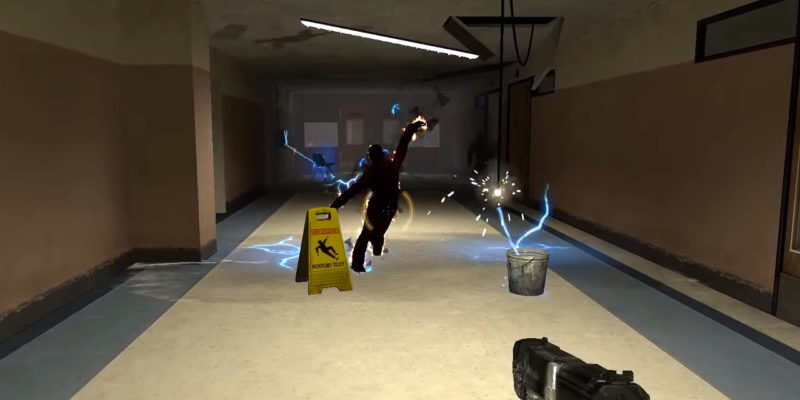 Although we did finally get a new game from the Half-Life series with Half-Life Alyx, the fact that it is in VR leaves plenty of fans in the lurch. Sure, you can have mods that make it possible to play without a headset, but it’s just not the same. While there have been many potential Half-Life games, such as Episode 3 or even Half-Life 3, we do know that work had also begun on a Half-Life 2: Episode Four.

Also known as Return to Ravenholm, Valve partnered with Arkane Studios to create it. That company has since gone on to make more awesome games like Dishonored. Now, in 2020, we can finally see some gameplay footage of this lost title.

This comes via the YouTube documentary channel NoClip, which is currently working on Arkane’s history. As part of the promotional teases for the various games developed by the studio, one about Half-Life 2: Episode Four emerged. The clip shows the player approaching a door that has a zombie-like enemy behind it. Said creature rips the door off its hinges before it is unceremoniously dispatched by a crude whack to the head with a pistol.

The whole sequence definitely feels like one plucked from that period. The shadows of both Half-Life 2 and the Source Engine certainly loomed large over the short clip.

The existence of Half-Life 2: Episode Four was previously confirmed by former writer Marc Laidlaw. He was aware of Valve’s partnership with Arkane for the creation of Return to Ravenholm. This game also appeared on many Arkane employees’ resumes under the Half-Life 2: Episode Four title. Laidlaw posits that the project was canceled as the setting of Ravenholm was “pretty much played out.”

The premise of a prequel while utilizing Ravenholm was also a “creative constraint” for the developers. If you want to know more about Arkane and Half-Life 2: Episode Four, be sure to check out NoClip sometime next week.

Maneater – Quick tips to get you started