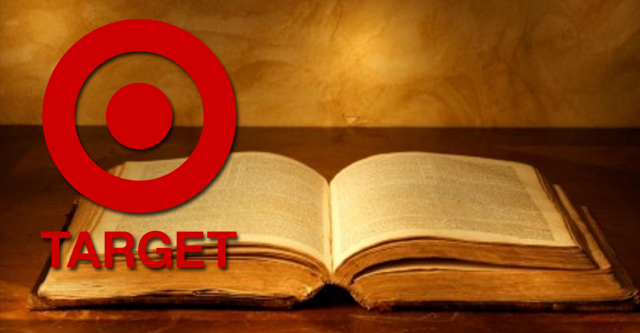 Target removed GTA V from their shelves in Australia so now GTA V gamers want to see them remove the Bible because of its violent content.

A few days a go Target decided that Grand Theft Auto V was not a suitable product to sell in the store stating that their decision to remove it was ” in line with the majority view of our customers.”

The game was removed from Australian Target stores following a petition started by three women who had suffered from sexual violence.

GTA V gamers were not happy with Target’s decision and decided to set up their own petition which outlines why the Bible should be removed from the shelves.

“This is The Holy Bible. This book means that after various sex acts, readers are given options to kill women by stoning her unconscious, Setting them on fire, cutting off their hands, and killing their children!

“This misogynistic book literally makes a game of bashing, killing and horrific violence against women. It also links sexual arousal and violence.”

When the GTA V decision was made, Target pointed out that they would “continue to sell other R-rated DVDs and games”, so we assume the Bible could fall into that category, although I somehow don’t think it has a rating.

As of today the Bible petition has managed to secure 51,312 signatures which is more than the 48,820 raised by the “Withdraw Grand Theft Auto 5” petition.

Will Target remove the Bible? I seriously doubt that. But let’s be honest here, the Bible has been responsible for more human misery, death and suffering than any videogame so perhaps it should join GTA V on their ban list.