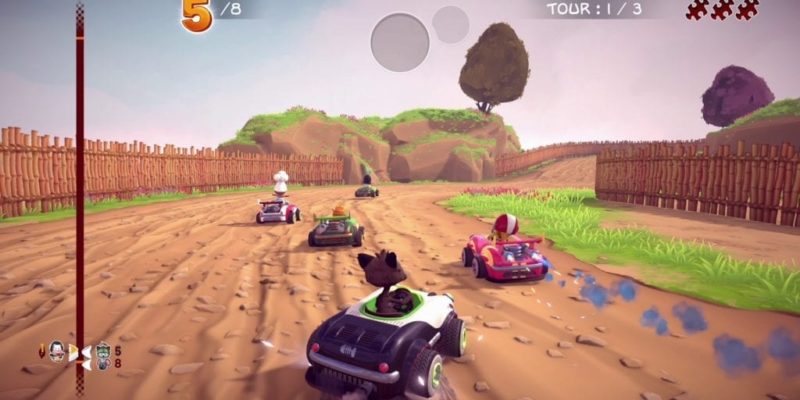 Somehow, some way, the ridiculously cheesy Garfield Kart is getting a sequel. Microïds and Paws, Inc. have just announced that Garfield Kart: Furious Racing will be heading to PC, PS4, Xbox One, and Switch on Nov. 5, 2019, in the United States and November 7, 2019, in Europe. Reuniting all of the beloved Garfield characters together for more racing mayhem, the game is set to be a heavily expanded take on the previously small scale kart racer.

The official description reads as follows:

Fans of racing, cats and lasagna: get ready! Garfield, the world-famous cat, is back to take on Jon, Odie and their friends in this racing game where anything goes! Each of the available characters and karts (which can be customized with dozens of accessories) has its own characteristics and a unique driving style: make a strategic choice to match your playing style so that you can cross the finish line in first place! Get off to the best start and master tough skids to save time and win the race.

Garfield Kart: Furious Racing will feature 16 “iconic” tracks from the world of Garfield (such as Palerock Lake and the Pastacosi Factory) and eight playable characters. Players will have the choice of selecting Garfield, Odie, Jon, Nermal, Arlene, Liz, Harry, and Squeak. Up to eight players can face off in online competition while four-player split-screen will be available for local play. The Switch port is set to feature local ad-hoc wireless play for eight consoles. Game modes will feature a traditional Grand Prix option, Single Race, and Time Trials.

Quite honestly, I’m shocked that another Garfield game is coming out. I’ve only heard about the original Garfield Kart through all the memes that sprang up around it. It was such a low-budget affair that I didn’t think any publisher would be willing to hedge a bet on following it up. Garfield Kart: Furious Racing at least looks better, but I can’t imagine that Nintendo will be sweating when it finally takes to the track in a few months.