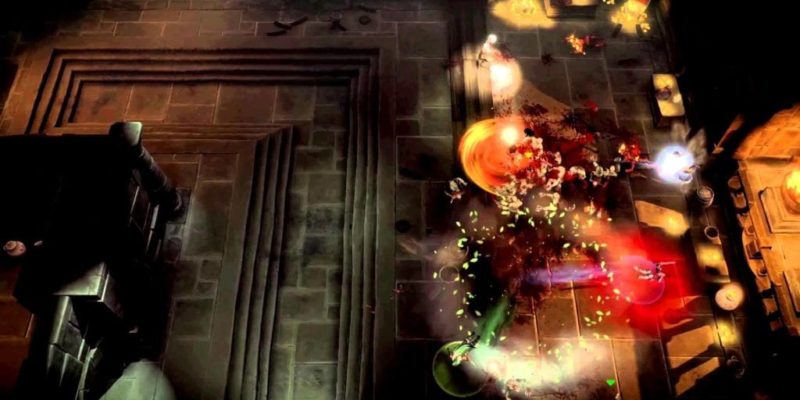 Having just written a news story about a Chaos remake, I’m now writing about a new Gauntlet. It’s 1980s fantasy videogame day, folks. Still, if I’d had to choose a studio to remake Gauntlet, Arrowhead Games would probably have been up there in my selections. The developers of Magicka know all about creating four-player co-op(ish) titles.

Let’s call it antagonistic co-op, shall we? Unlike Magicka you (probably) won’t be semi-accidentally hurting your friends with spells, unless that’s an addition they’ve made to the game. But you will almost certainly be infuriating them by eating all of the food in a room when they desperately need health. You dick.

Gauntlet is … wow, am I actually going to describe Gauntlet? Does nobody read videogame history any more? Okay, well. Gauntlet is the proto arcade dungeon crawler. There are four character choices (Warrior, Valkyrie, Elf and Wizard) who have their own special ability (best at melee, most armour, rapid ranged combat, spells, respectively) and players have to hack, slash, shoot and burn their way through hordes of good old fantasy staple foes like skeletons, demons and spiders.

That was pretty much it for the original. Arrowhead say their remake “innovates on past titles while staying true to the brand’s legendary format.” Actually, publishers Warner Bros. say that. Arrowhead says “Gauntlet is one of the original and best known video game properties and we are looking forward to creating a fresh, yet true to the original, take on a multiplayer masterpiece.”

Expect online capabilities as well as local multiplayer, plus some kind of procedural generation element to the dungeons. Watch the trailer below to see how Gauntlet is looking in its 2014 incarnation. The game will be available “this summer” on Steam.

Chaos Reborn materialises on Kickstarter, is not an illusion