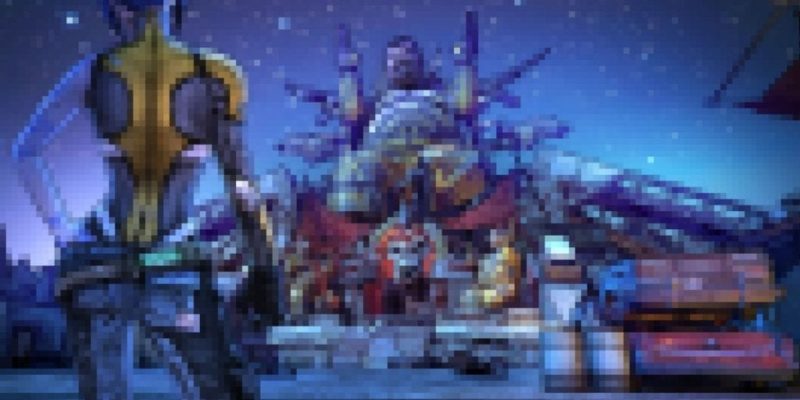 Gearbox hasn’t yet hit the breaks on its PAX East teaserpalooza. The team once more took to Twitter to tease…well, Borderlands 2, for what we gather is a Sega Genesis port. If this is some announcement for a remaster, I think Gearbox got things a little backward.

Time to tease another game for PAX! pic.twitter.com/nYXncBmlI9

The pixelated image isn’t obscure enough to hide what it is. We can see the back of Maya, the Siren class, who made her appearance in Borderlands 2. She’s standing in front of what appears to be the Shrine of the Gunbringer, located near the end of Bloodshot Ramparts. The shrine itself stands to honor everyone’s favorite sleazy gun seller, Marcus Kincaid. Marcus, of course, appears in all major Borderlands games (he actually didn’t appear in the Pre-Sequel).

While it’s a bit odd for Gearbox to tease a game that’s been out since 2012, we have some theories as to why. It’s doubtful that this tease relates to some kind of remaster. After all, we’ve already had a remaster of Borderlands 2. It was cleaned up for The Handsome Collection, which hit PlayStation 4 and Xbox One in 2015. It’s more likely that this is a hint for a port to the Nintendo Switch. The series hasn’t hit that particular platform (yet).

Of course, we’ll know for sure once Gearbox takes to the stage during PAX East. The show will begin at 2 PM EST on March 28, only two weeks from now. It’s believed that Gearbox will also finally lift the veil on Borderlands 3. The company dropped a teaser for that anticipated project only a couple of days ago. Gearbox is showing off another game, which we believe to be a brand-new IP.

Whatever the case, Gearbox has plenty in store for PAX already. Will the company tease anything else this week? It’s certainly possible. I, for one, can’t wait to see a pixelated screen teasing the next Aliens: Colonial Marines, just to shake things up.