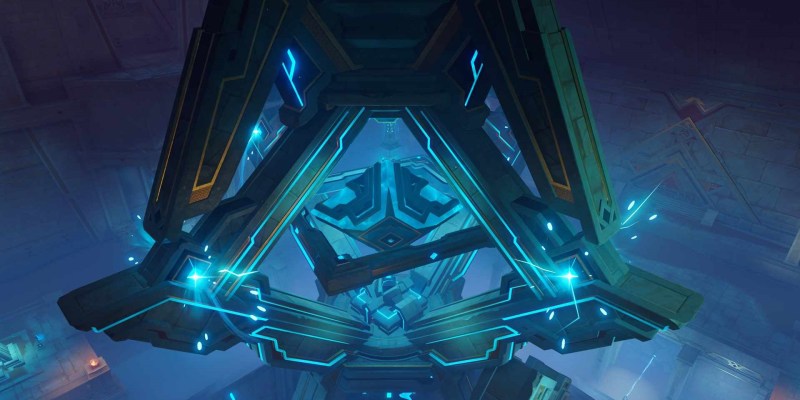 Three additional clearance upgrades for your Scarlet Stone Slate can be found all over Sumeru Desert. Once you have those, it’s time to return to Duat Hall. There, you’ll interact with a strange alien machine. Here’s our Genshin Impact guide to help you activate the giant device in Duat Hall so you can reach Aaru.

After obtaining the third and final clearance upgrade, Paimon will tell you to head back to Duat Hall. You should now be able to head to the opposite side of the chasm where the massive alien machine awaits.

The goal here is to activate the giant device. To do that, you’ll need to interact with the four pillars around the room.

Note: There are beam/moving cell objects down below. I did interact with these, making sure that beams were able to hit the opposite crystals. However, I’m not sure if that’s a requirement.

In any case, the machine should get activated soon enough (as seen in the featured image). You may then enter it by going to the center of the contraption.

This teleports you to a location called Aaru in Genshin Impact. Apparently, it’s the “old” Aaru, which only a few people in the village remember from ancient times. Your task now is to light the three Primal Torches. Basically, just release the embers and follow them to other pedestals. This will cause robot mobs to spawn, but you can easily take care of them.

Upon activation, the ground will shake, causing the Traveler and Paimon to take the elevator up. At the top of the pyramid, you’ll find a boss called the Field Annihilation Array.

It’s a weaker version of the Algorithm Matrix, so just wail away at it until it’s defeated. Then, open the chest to pick up the Record of Aaru’s Shut quest item. The pyramid will expand, revealing its glowing core in the center.

Next up, make your way back to Aaru Village. Talk to Soheil here, who suddenly changes his tone when he realizes how much of the underground you’ve explored. Soheil asks you see the Scarlet Stone Slate and, in return, he’ll give you his notes.

This completes the Dual Evidence quest in Genshin Impact. However, you’re not done yet. Soheil has a marker above his head, which leads to the Soheil’s Wish branch of the Old Notes and New Friends quest chain.