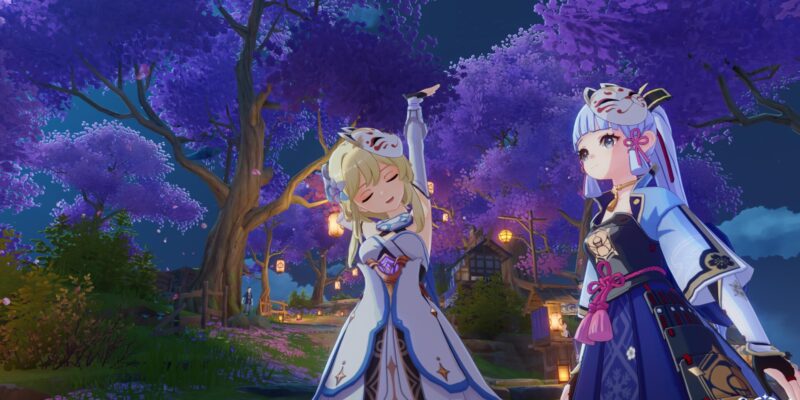 Your completion of “The Immovable God and the Eternal Euthymia” (Act I of the Archon quest in Inazuma) unlocks new content. Not only will you gain access to the rest of the region, but you’ll also be able to learn more about Kamisato Ayaka’s background. Here’s our Genshin Impact Ayaka story quest guide to help you with Act I of the “Grus Nivis Chapter,” the stone wall puzzle, and, yes, even a recipe for Mushroom Pizza.

Note: For more information about the game, check out our Genshin Impact guides and features hub, as well as our overview for the version 2.0 update. Likewise, you can take a look at our character weapons/artifacts/build guide for Kamisato Ayaka.

The moment you complete Inazuma’s Archon quest and exit the Komore Teahouse, Ayaka will talk to you about her own story quest. It entails searching for someone named Tsubaki while preparing for a festival.

Head to the Ogura Textiles and Kimonos shop to begin. There, the proprietor will tell you that she’s got some goods, but you’ll need to talk to the Trade Association first. 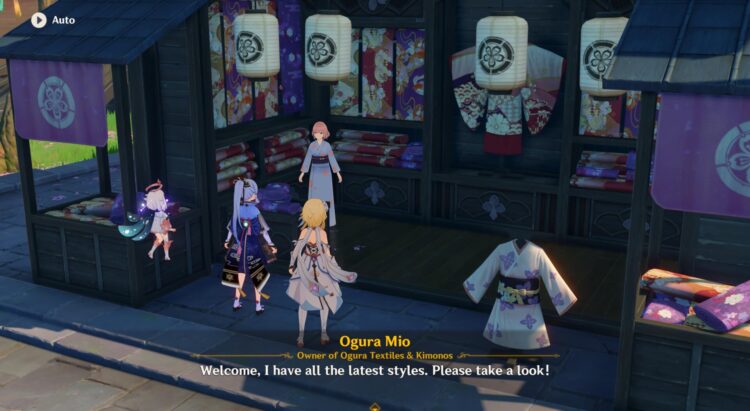 Return to Ritou and go to the marked location. The NPC you’re looking for, Kurisu, isn’t here. But, if you go to the back of the building, a cutscene will trigger. It looks like Kurisu’s silk shipment was stolen, and you need to find the thieves.

Fast travel to the next area and follow the footprints. They’ll eventually lead you to a bunch of Nobushi ronin that you need to fight. Ayaka will join your party as a guest here even if you already got her via wishes. 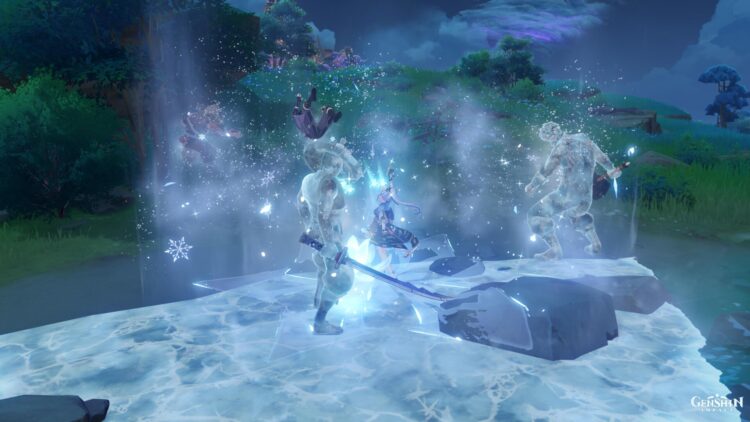 Return to the kimono shop when you’re done and Ayaka will ask you to have a meal with her. Go to the nearby restaurant and the owner will talk to you about Ayaka’s background. It seems that Ayaka’s been lonely for quite some time. Even though she’s the scion of the Kamisato Clan, she’s often surrounded by attendants and bodyguards. Technically, you’re the closest thing she has to a true friend.

After the conversation, Ayaka will ask if you can make a dish for her. You’ll have to cook Mushroom Pizza (4x mushroom, 3x flour, 2x cabbage, and 1x cheese). The recipe itself is found inside a chest in the Stormterror’s Lair zone of Mondstadt. Once you’re done cooking, the dish will be prepared so just reply with the ingredients that you used. 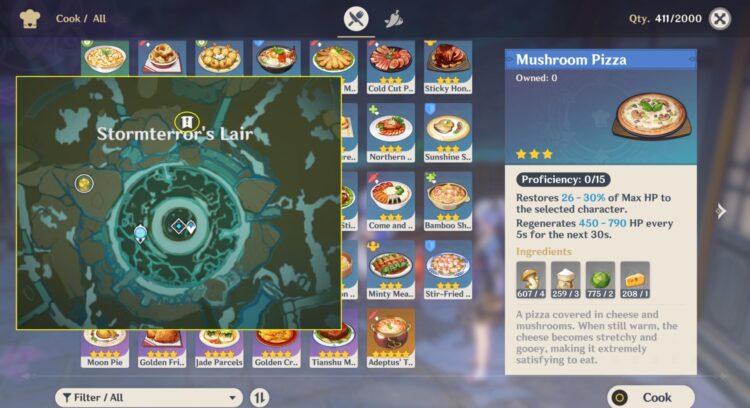 The next part of Ayaka’s story quest in Genshin Impact has you looking for clues about Tsubaki. Travel to the marked location west of the main temple in Inazuma City. Jump off the cliff and you’ll see a large cavern down below. 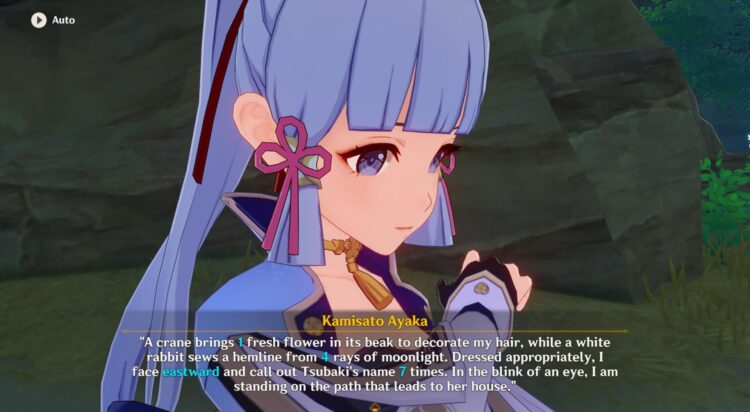 These clues pertain to an odd-looking stone wall with shrubbery. You’ll find at least three of these on higher ledges. But, the one that you want is the stone wall that you’ll see as you’re facing east (seen in the image below). Interact with it and you’ll see a prompt to knock. Go ahead and knock once, then four times, and, finally, seven times.

The stone wall will reveal a nook with a chest. Pick it up to obtain a notebook. Ayaka will read this and she’ll realize that Tsubaki is actually her mother.

Note: Below this area, you’ll find a small passage with 1x Electroculus and 5x Onikabuto. 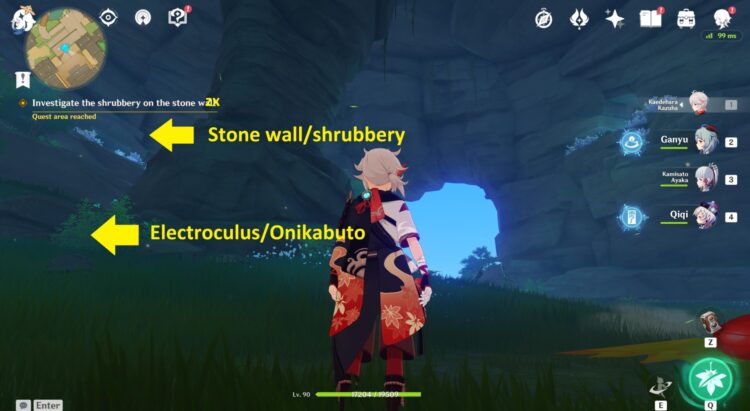 To keep her spirits up, Ayaka asks the Traveler to accompany her to a festival. Just fast travel to Byakko Plain and cross the water to reach Amakane Island. The NPCs here will be happy now that Ayaka’s around, so just follow her as she checks out each stall.

After this, the two will head to Chinju Forest. In this serene location, a short cinematic will play where Ayaka performs a traditional dance. That’s it, you’re done with Ayaka’s “Grus Nivis Chapter” story quest. Well, this is just Act I so we might see a continuation down the line.

Lastly, don’t forget that you can also do Yoimiya’s “Carassius Auratus Chapter” quest. Then, once you’ve finished both Ayaka’s and Yoimiya’s missions, you’ll unlock Act II of the Inazuma Archon quest chain. 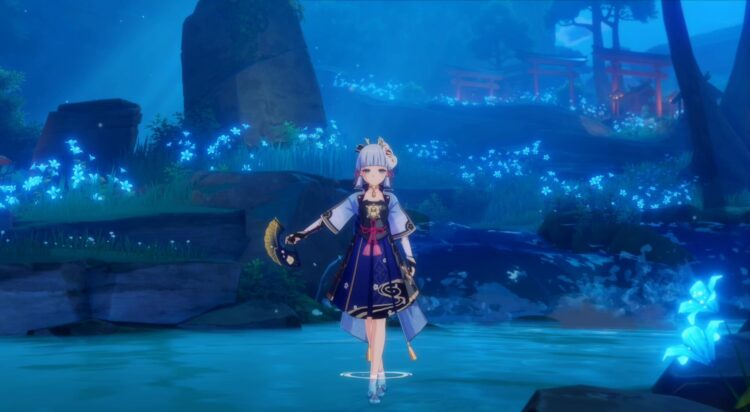