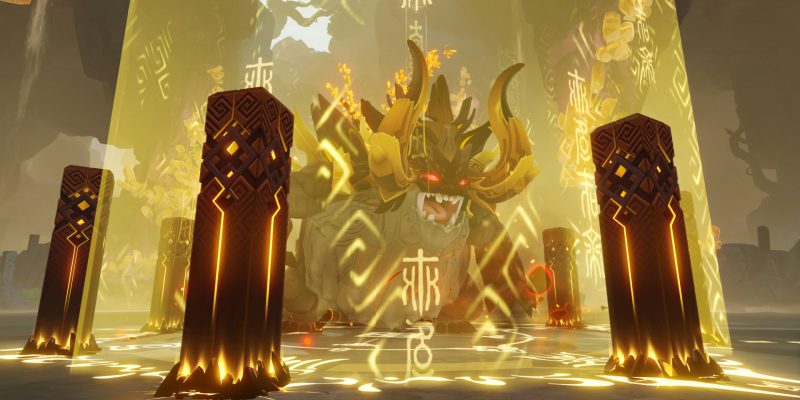 Genshin Impact‘s version 1.5 update presents a new challenge for Travelers. It involves progressing further in Zhongli’s story quest, “Historia Antiqua Chapter: Act 2,” until you reach a sealed cavern. There, the group will do battle against Azhdaha. This first encounter is fairly easy since Zhongli acts as a guest character (fifth party member), and an NPC even heals the group when needed. After completing the quest, though, you’ll be able to battle the stone dragon on your own (or with randoms via matchmaking). Here’s our guide to help you with the Azhdaha weekly boss fight in Genshin Impact.

The Azhdaha boss fight in Genshin Impact can be a little tricky at first, especially when Zhongli and Kun Jun aren’t around to help you. There’s also a Ley Line Disorder modifier here: characters who get hit by Azhdaha’s Cryo, Pyro, Electro, and Hydro attacks get marked. These marked characters will take continuous elemental damage. If you’re playing with a group, then this damage-over-time (DOT) effect only applies to a specific player that gets hit. If you’re playing solo, however, then the mark remains on you even if you to a different character. If you’ve got a nuking setup, then you could make quick work of Azhdaha. Still, it might be a little risky since a majority of the boss’ abilities have a large AoE radius.

Conversely, you can just snipe the boss from afar. I personally just used Ganyu’s charged shots while staying at the edge of the arena. Azhdaha tends to switch to a particular element at 75% and 50% health (usually after it does the Godzilla/Jaws burrowing ability). Depending on the element, you might see different kinds of attacks occurring. In my case, I’ve only seen it deal Electro and Hydro damage:

Remember, these elemental attacks will cause a DOT effect if you get hit. The only way to prevent this from happening is if you’re shielded. This can be tricky if you’re fighting Azhdaha from a distance, and a little inconsistent since other types of damage can break the shield anyway. At best, you’ll want to make sure that you’re buffed and healed by eating food. Oh, and try to keep your healer alive as well. Like other weekly bosses, Azhdaha also drops the Gladiator’s Finale and Wanderer’s Troupe artifact sets. Likewise, it can drop the Northlander weapon crafting materials too.

What you’ll want to look forward to, however, are the new talent leveling materials: Dragon Lord’s Crown, Gilded Scale, and Bloodjade Branch. This last one, Bloodjade Branch, is actually used by Yanfei. As for the Dream Solvent, you should have at least one already after completing Zhongli’s story quest. Azhdaha also has a chance to provide these after it’s beaten. The Dream Solvent is a special consumable that you can use on the alchemy bench. Simply click on the second tab and look for a 5-star/gold character leveling material.

Using Dream Solvent, you’ll be able to convert that material into its counterpart provided that it also comes from the same boss. For instance, you can turn Dvalin’s Plume into Dvalin’s Claw or Dvalin’s Sigh. But, you can’t turn any of these into the drops from other weekly bosses (i.e., Boreas items, Shard of Foul Legacy, and the like).