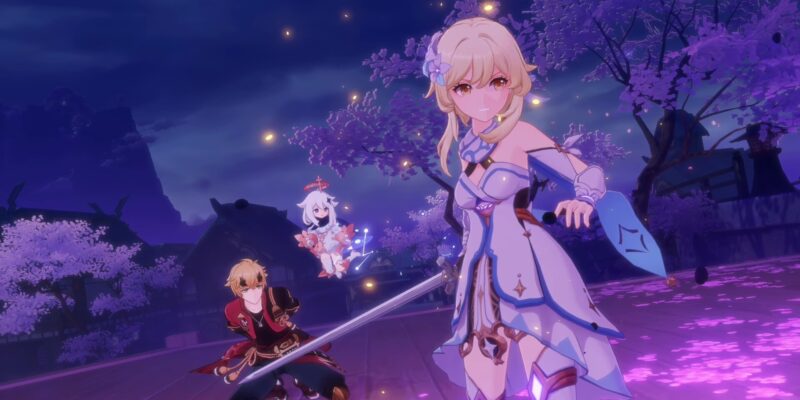 So, you’ve managed to make your way to Inazuma, completing “The Immovable God and the Eternal Euthymia” quest. Oh, and you’ve also cleared both Ayaka’s “Grus Nivis Chapter” and Yoimiya’s “Carassius Auratus” story missions. What’s next? Well, let’s just say that the excitement’s about to pick up. Here’s our Genshin Impact Inazuma Archon quest guide to help you with Act II “Stillness, the Sublimation of Shadow.”

Note: For more information about the game, check out our Genshin Impact guides and features hub, as well as our overview for the version 2.0 update. Likewise, please be reminded that this guide contains spoilers.

As long as you’ve done the aforementioned missions for Ayaka and Yoimiya, you’ll be able to start Genshin Impact‘s “Stillness, the Sublimation of Shadow” Inazuma Archon quest. If you enter Komore Teahouse, Ayaka will meet up with you saying that the Raiden Shogun and Electro Archon, Baal, is celebrating the Vision Hunt after claiming the 100th Vision in the region. The problem? It looks like Thoma’s going to get shafted.

Make your way to the Archon statue near the main temple to watch a cinematic. Baal shows off her powers as she attempts to take Thoma’s Vision. Thankfully, the Traveler gets in her way. 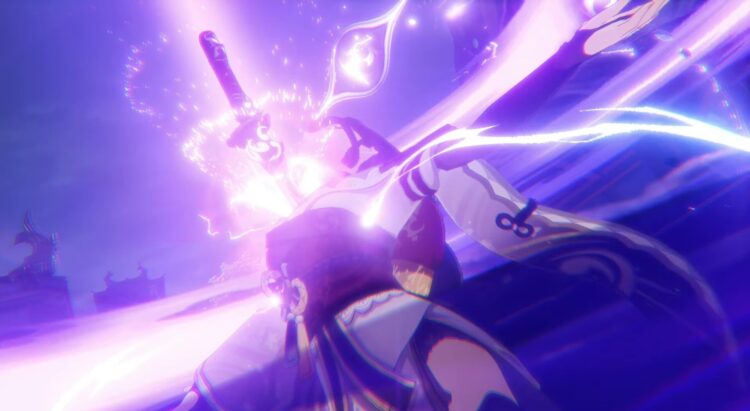 This leads to a boss fight against Baal herself. She’ll teleport you to a random dimension and showcase her abilities. She’s got lightning-fast strikes (pun intended) and she zips all over the place.

Moreover, once she reaches a certain HP threshold, she’ll prevent every character except the Traveler from using their skills and bursts. Since I barely bothered to level up Lumine, I had to rely on normal and charged attacks. 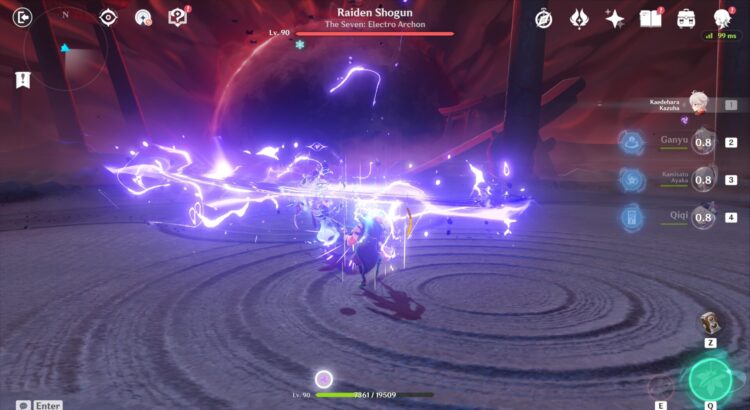 To be clear, I’m not sure if you could win this fight. I do know that once Baal’s HP was low enough, another cinematic played where she absolutely mauled the Traveler with her ultimate. However, before she can strike the killing blow, Thoma managed to escape and bring the Traveler out of Inazuma city.

Note: You’re technically wanted by the Raiden Shogun and her forces now. That means Inazuma City’s main temple (past the bridge) and the nearby prison are off-limits to you. If you come close, the guards will shoo you away and you’ll respawn near the fast travel point. Still, you’ll be able to interact with the other NPCs and vendors further north of the city. 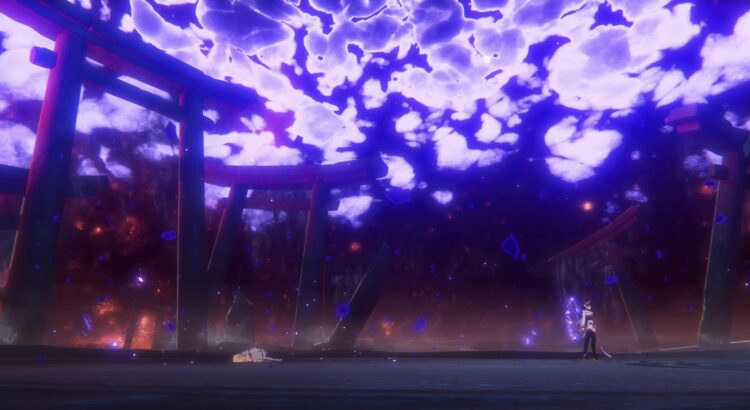 Anyway, our next step is to look for resistance members in Kannazuka (the central island). The locations are marked on your map and, even better, you can fast travel to these places if you already tagged the waypoints beforehand.

Eventually, you’ll meet a samurai by the name of Teppei in Nazuchi Beach. He’ll lead you to the base in Fort Fujitou. Here, you’ll be introduced to Gorou, one of the group’s generals. He’s, uh, a tanuki-human hybrid, I think. Maybe he’s also a cat? 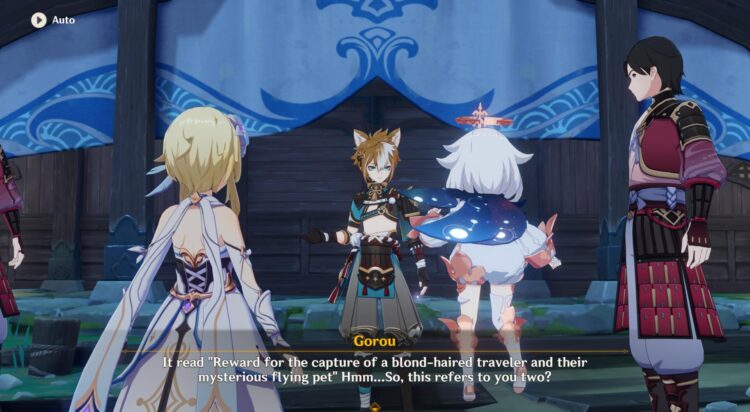 You’ll be given various tasks such as: 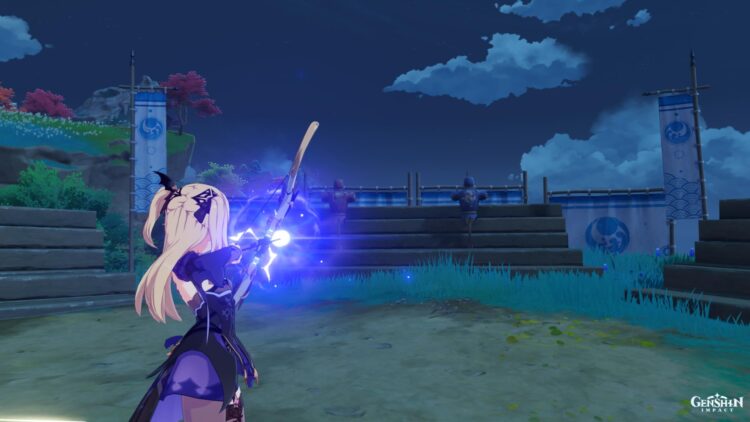 When you’re done, you’ll be informed that the Raiden Shogun’s army has arrived in Nazuchi Beach. Gorou’s forces will face off against Kujou Sara, Baal’s trusted enforcer. The Traveler is supposed to duel with three of Kujou Sara’s lieutenants, but you can actually use your other characters (or entire party) to take them all out.

After beating these guys, another cinematic will play. Savor the moment because this is one of the most epic sequences in Genshin Impact. 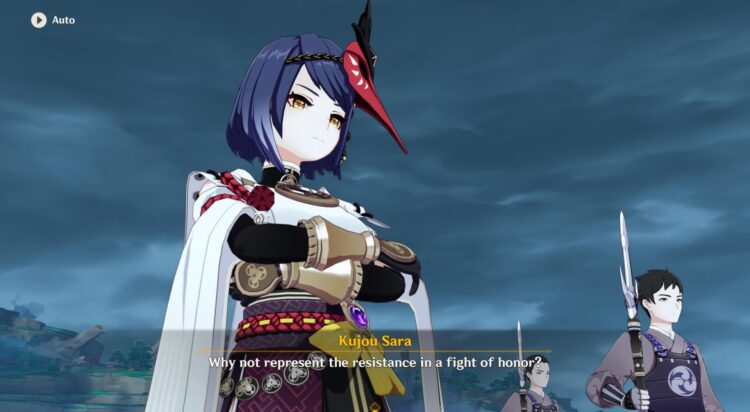 Kujou Sara and Gorou order their respective forces to attack. Slowly, the resistance members will get trounced. Fortunately, Sangonomiya Kokomi, the Divine Priestess and resistance leader, arrives to save the day. Not only that, but both Kazuha and Beidou also join the fray. Kujou Sara has no other option but to withdraw.

Kokomi will then have a short discussion with the group. There are no immediate plans yet to battle the Raiden Shogun, so it looks like we’re done with Inazuma’s Archon quest chain for now. You do receive lots of rewards such as primogems, gold, and a Memory of Violet Flash to level up the Electro Traveler’s constellation. 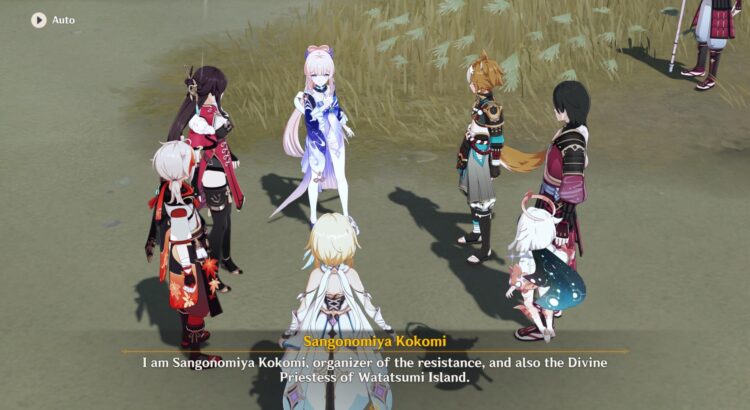