When you activate the skill, Childe’s/Tartaglia’s bow turns into water-based daggers, and melee attacks will inflict the Riptide status. Subsequent hits on enemies affected by Riptide deal AoE Hydro damage, and kills will spread the Riptide effect to nearby foes. Later, once you’ve leveled him up, you’ll get a passive that allows normal and charged melee attacks to apply Riptide after you land a crit. Given how Childe does consistently high damage while in melee stance, his elemental skill should be prioritized when leveling.

Just remember that the longer Childe stays in melee stance, the lengthier the elemental skill’s cooldown will be. As such, you probably don’t want to go beyond 15 seconds with him meleeing opponents unless you wish to incur a severe cooldown penalty.

Meanwhile, his elemental burst, Havoc: Obliteration, is also something you’ll want to boost down the line. You should be using his burst while in melee stance after multiple hostiles have been afflicted with Riptide to create a deadly blast. Lastly, I’d personally ignore Normal Attack: Cutting Torrent. This mostly buffs his aimed/charged shots and regular shots with a bow. Since most of your damage comes from melee stance DPS, you’d rarely have use for sniping. 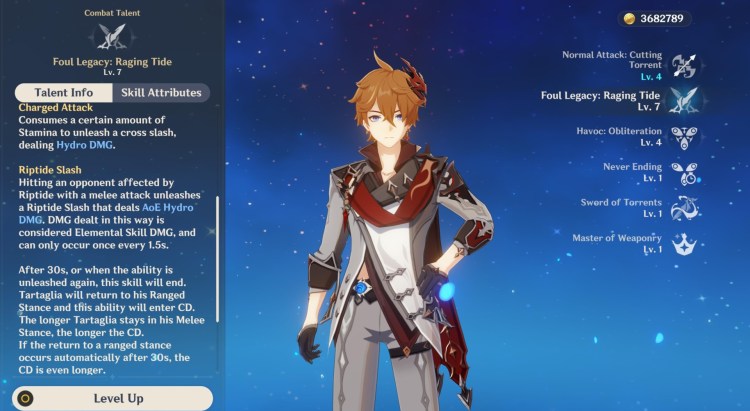 C4 adds some decent DPS, but C6 is an absolute game-changer. This allows Childe/Tartaglia to swap between stances freely and without suffering from lengthy cooldowns as long as you can pop your burst while in melee stance. Of course, since he’s a 5-star character, it’s not viable to “chase” all his constellations as this is mostly something “whales” would do.

Anyway, the next section talks about Childe/Tartaglia’s ascension materials. 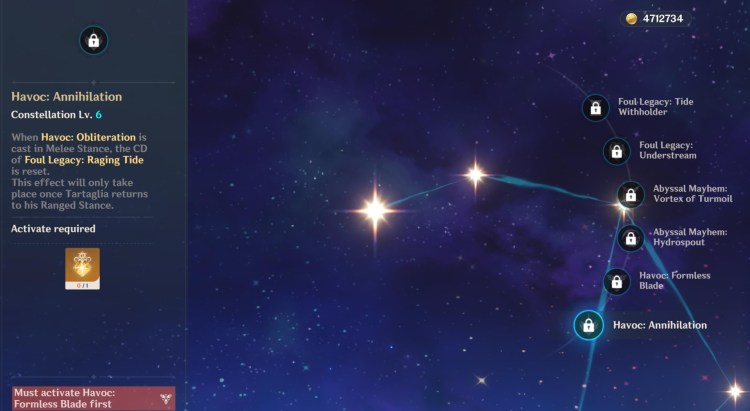