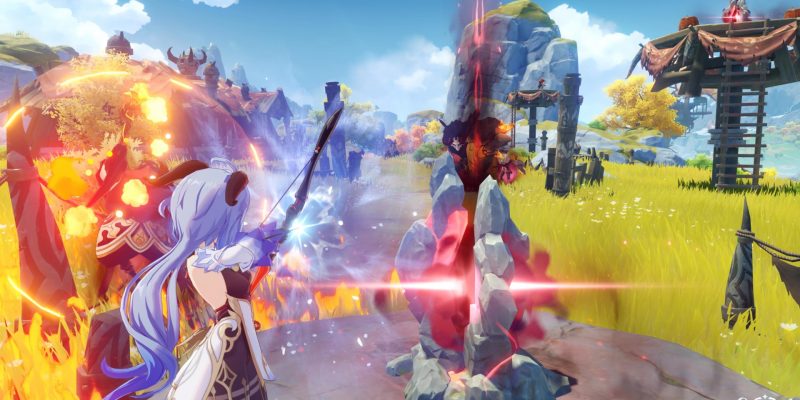 Where Shadows Writhe has three rooms with specific encounters. The important mechanic to take note of here, as well as in the Twisted Realm – Domain of Furious Thunder which we’ll tackle later, is the Plasma Field.

Once you start each fight, a large purple circle will appear in the center of the room. If you step out of this circle, your character will be hit by lightning (Electro damage) every couple of seconds. This makes ranged combatants more viable, especially since you’ll need to eliminate foes from a distance. Alternatively, you can pick melee fighters who can quickly blitz through mobs while under the effects of shields or healing.

There are 12 opponents here (mostly slimes and hilichurl archers). There’s a 30-second timer at the start, but defeating your foes adds a few extra seconds. There are five opponents in this room. The first three are Fatui combatants of different element types (i.e., Anemo, Pyro, and Hydro). Two Fatui assassins will spawn after taking out these fellas. There’s no time limit for this one, but you do need to eliminate 10 opponents. The first wave has hilichurl archers, mitachurls, and a samachurl who tends to heal them. After defeating these hostiles, a Pyro abyss mage and several Pyro slimes will appear.

After clearing Where Shadows Writhe, you’ll receive some rewards, including 270 Fractured Fruit Data for the event shop. Anyway, let’s go ahead and discuss the next objective: clearing the Twisted Realm – Domain of Furious Thunder challenge.