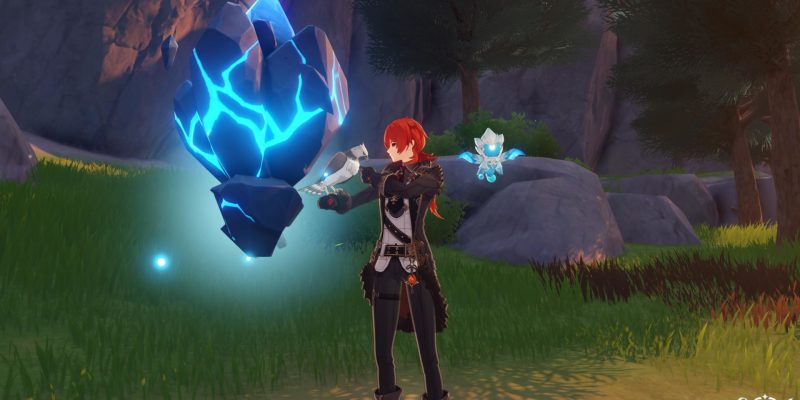 So, what exactly are those crystals for? Well, let’s dive right into the details.

The crystals that you found from the Irminsul Fruit Fragments are actually used to buff the Energy Amplifier. Open this screen and you’ll be able to attach the crystals. If you went through all the spots in Springvale, Guyun Stone Forest, and Lingju Pass, then you should have 12 crystals with you.

There’s also a resource called “Motive Force” that caps how many crystals you can attach at any given point in time. As such, you’ll want to fine-tune your selections to make sure that you have the buffs that can complement your party’s setup. You can increase your Motive Force by clicking on the plus sign next to it, and choosing three high-level characters from your friends’ showcase. However, I think 1,000 Motive Force is the maximum for now and you can’t go beyond that. Anyway, here are the effects of the crystals:

Note 1: If you’re playing co-op, then only the host (P1) character will be able to configure the crystals that can be used for the Energy Amplifier.

Note 2: These effects are only active when you enter a specific domain that’s part of Genshin Impact‘s Energy Amplifier Initiation event. One of these domains is called Vishap’s Rest which you’ll be able to visit now.  You can tackle this solo or with another player via co-op.

Think of this as similar to past domains that you’ve visited in Genshin Impact. There are a couple of rooms with several mobs that are scaled to your level. They’re mostly hilichurls, and they’re not buffed by a Mutation Stone either. Once you reach the end, though, you’ll have the “boss” encounter, if you can call it that. As the domain’s name implies, this domain has you facing off against a couple of Geovishap Hatchlings followed by a Geovishap. Seeing that the crystal buffs are mostly Geo-based, then you’ll want someone like Zhongli or Albedo to generate shields for your team.

After completing this encounter, you’ll receive some gold, primogems, and Fractured Fruit Data. Also, the Twisted Realm will open up. However, before we discuss that, let’s talk about the event shop rewards in the next part of our guide. By Logan Broadley14 hours ago
Guides