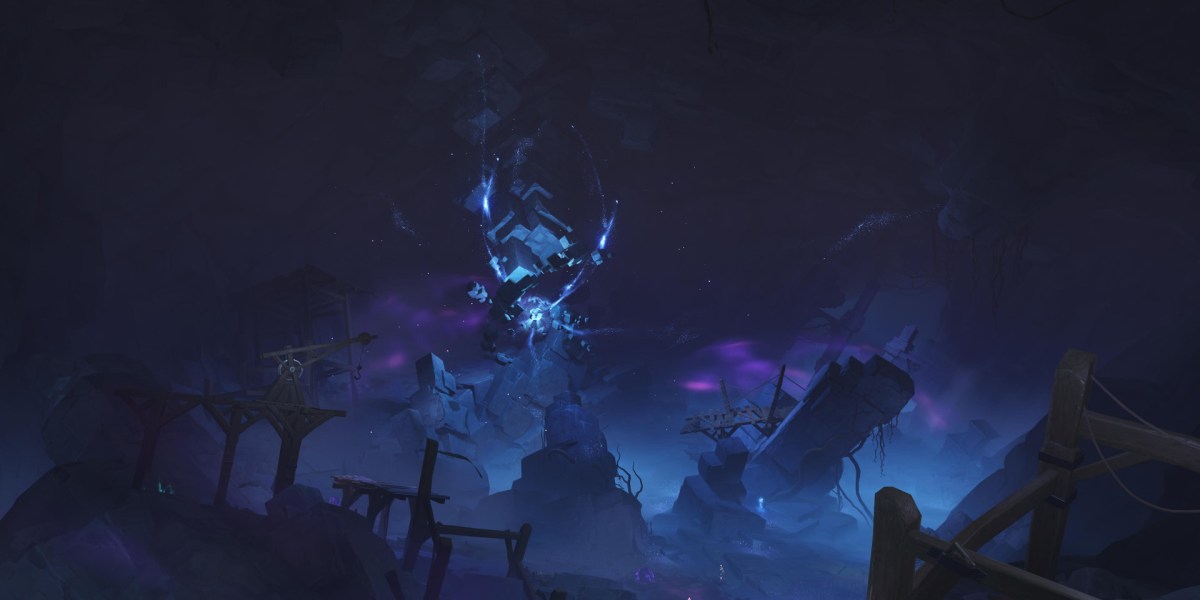 After aiding Zhiqiong with her tasks and blowing up the wall with the Mountainator Cannon, you’ll find yourself in a dark cavern with several contraptions that you can use. Here’s our Genshin Impact guide to help you activate the mechanism as part of Heavenly Stone’s Debris.

To be clear, the Heavenly Stone’s Debris section of the Chasm Delvers quest in Genshin Impact started earlier (i.e., when you used the cannon). This part is just the conclusion. In any case, you’ll see the following objects when you get to the Stony Halls: The only way you can progress further is by upgrading your Lumenstone Adjuvant gadget via Jinwu. If you’ve been collecting Lumenspar crystals while exploring The Chasm, then you’re in luck.

You’ll need 16x Lumenspar and 1x Lumenstone Ore (rewarded after you finish Zhiqiong’s initial tasks). With these, your gadget will be rank 2, allowing you to use the Blooming Light effect when you press the “Z” key. Blooming Light will cleanse the ooze globules as long as you’re standing fairly close to it. However, try not to stand on top of the liquid itself, as this will deplete your light charges.

Note: If you have three charges, use them on the totem at the southern portion of this chamber. The totem will replenish all your charges to full. Interact with the three switches once the oozes have been cleared to fully activate the mechanism. This will spawn a Hydro Abyss Herald that you need to defeat. Once that’s done, the center of this room will open up. Before you drop down, though, make sure you pick up your second Lumenstone Ore along the edge.

Then, after you jump down, you should find a fast travel point. Beyond this area, you’ll need to get past a dark fog by ringing the two bells. Genshin Impact: How to activate the Mountainator Cannon

Genshin Impact: How to clear the dark fog and ring the two bells