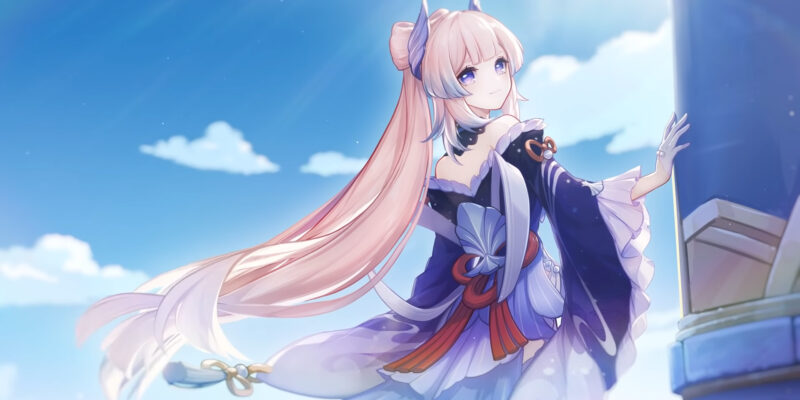 Genshin Impact Version 2.1 rolled out at the beginning of September. It introduced a substantial amount of new content to the action RPG including two new islands, a fishing system, more bosses, and four new characters. The Raiden Shogun was the first new character available in Version 2.1. Aloy was the second, but only for PlayStation players. Now, developer miHoYo has just released a teaser trailer for the next character coming to Genshin Impact, Sangonomiya Kokomi.

In the character teaser, miHoYo reveals that Sangonomiya Kokomi is the new divine priestess who oversees the wellbeing of the new Genshin Impact island, Watatsumi. But, Kokomi was the leader of the Sangonomiya Resistance and is better suited to warring than ruling.

She is nicknamed ‘The Pearl of Wisdom,’ and the new trailer refers to her as “The Ocean’s Will.” With all that tactical knowledge, I’m sure she’ll be able to handle her new role. She’ll also be a valuable support character on any team.

As a playable character, Kokomi is a five-star Hydro-wielder. She uses a Catalyst as a weapon and has enhanced healing bonuses. She excels at dealing area of effect Hydro damage, while also healing teammates.

How to get Sangonomiya Kokomi in Genshin Impact

Kokomi will become available in Genshin Impact on September 21. You will be able to acquire her through the Event Wish – Drifting Luminescence. She will have a huge drop rate boost for this Wish. When the Drifting Luminescent Event Wish begins, the current one will come to an end. Meaning you will no longer have a chance to acquire The Raiden Shogun with a bonus drop rate.

You still have a few days left to complete the Lunar Realm fishing event too. If you need some help with it, you can check out our guide. You can also browse our Genshin Impact guides and features hub for guides on all aspects of the game.