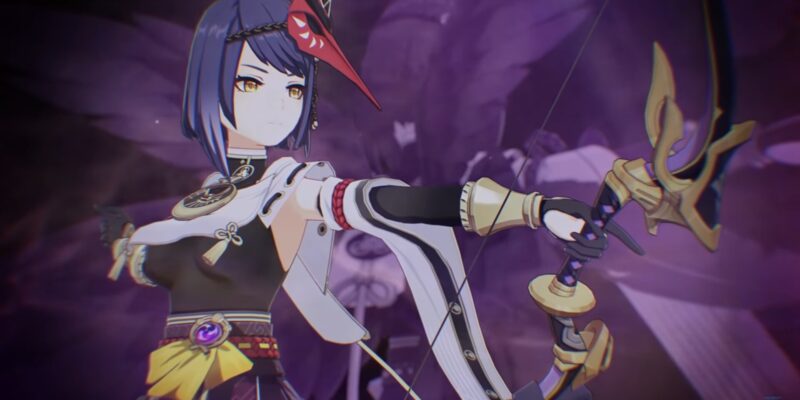 With a new major update, comes new characters for Genshin Impact players to enjoy. Genshin Impact recently hit Version 2.1 and will see the release of four new characters: Raiden Shogun, Kujou Sara, Aloy, and the still unreleased Sangonomiya Kokomi. With all these new playable wallet-snatchers (sleep well, my debit card), mihoyo released some gameplay trailers to show off their kit.

These trailers give a detailed explanation of each characters’ kits and playstyle. Just note, that Aloy is currently only available for players with a PlayStation 4 or 5. There is a way to obtain Aloy early for PC, but only if you have the console on hand. You can find out how to unlock Aloy here.

Call down the lightning

Kujou Sara is a four-star Electro character that’s designed to act as a sub-DPS and support character. After using her Elemental Skill, she will blink backward and get a Crowfeather charge. Using her aimed shot with her bow consumes the charge and leaves a mark where the arrow hits. The mark will detonate after a short time, dealing Electro damage to any enemy in its radius. Additionally, any active character within the radius of the mark gets an attack bonus, similar to Bennett. Finally, her ultimate shoots out projectiles in four directions, dealing Electro damage, and this ability grants an attack bonus too. There are some more finite details in the trailer, which you can watch here.

Next, Aloy is a free five-star Cryo character — a collaboration with the Horizon Zero Dawn video games. Her Elemental Skill tosses a Freeze Bomb in a targeted direction, exploding, dealing Cryo damage, and then splits into bombs that explode on contact or after a short delay. The bombs also reduce enemy attack, and grants Aloy a Coil Stack, increasing her normal attack damage. After gaining four stacks, she’ll get another normal attack buff and her attacks will turn into Cryo damage. Meanwhile, her Elemental Burst fires a projectile to a targeted direction, then detonates and deals massive Cryo damage. You can watch the character trailer below for more details.

If Kujou Sara or Aloy interests you, follow our Genshin Impact guides here and learn how to build them for your team. Otherwise, be sure to pull for Kujou Sara before she leaves the current banner as a featured character.

Sheltered will be free next week on the Epic Games Store