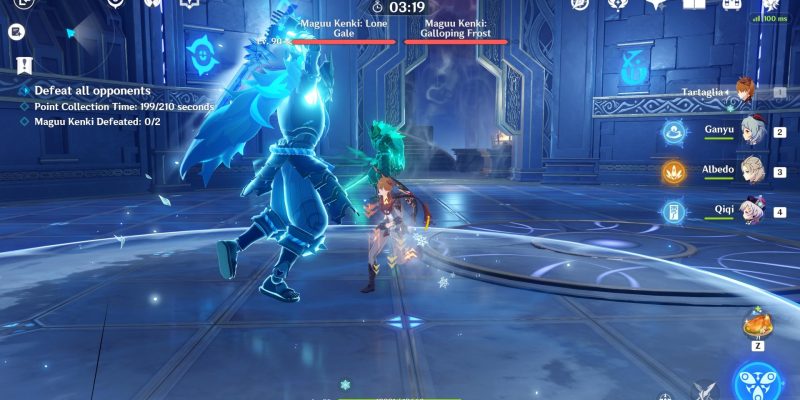 The four characters with a +20% damage bonus for this challenge are Tartaglia, Fischl, Bennett, and Keqing. Next, let’s take a look at the modifiers and flairs for the twin Maguu Kenki boss fight: 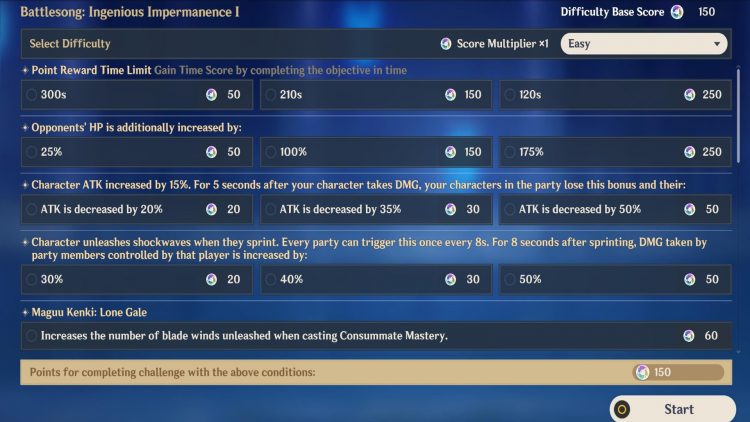 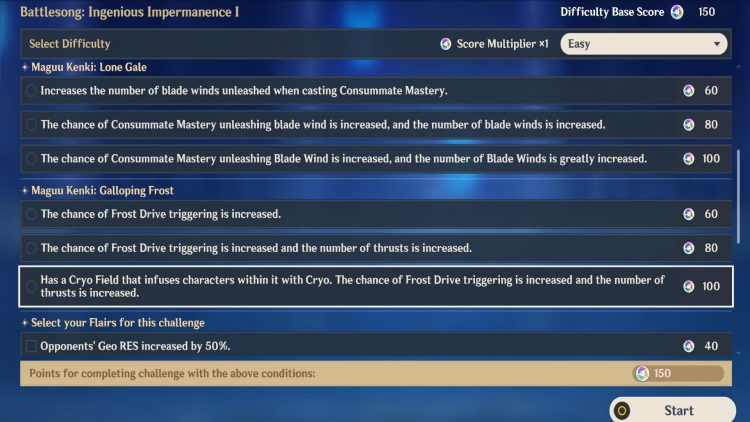 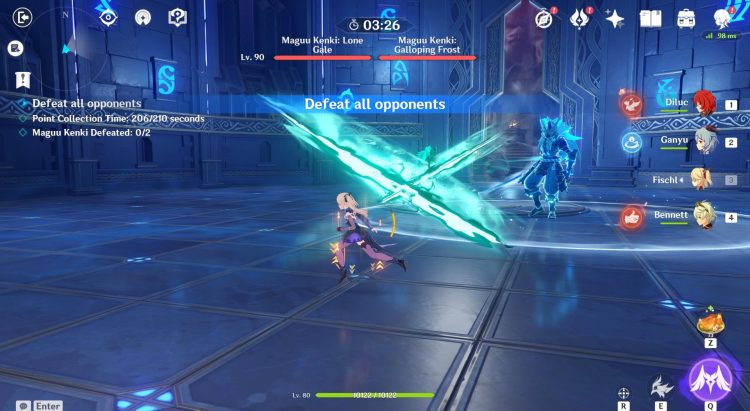 The Anemo Maguu Kenki (Lone Gale) tends to stay near where it initially spawned. Even if you move further away from it, it’ll just use Blade Winds (slashes that zip through the air). Its normal attack consists of two swipes that churn out these projectiles. As for the Cryo Maguu Kenki (Galloping Frost), it’s a lot more aggressive. It’ll chase you down and it has several vicious moves.

When the battle starts, Maguu Kenki: Lone Gale will cast Consummate Mastery. Unlike its normal attack, this one fires off roughly six Blade Wind projectiles. Getting hit once tends to slightly stun a character, and they’d likely get hit by more attacks. Needless to say, several Blade Winds will kill your fighters. You can try to dodge them or get a 5-star character to pop an elemental burst to avoid the damage. 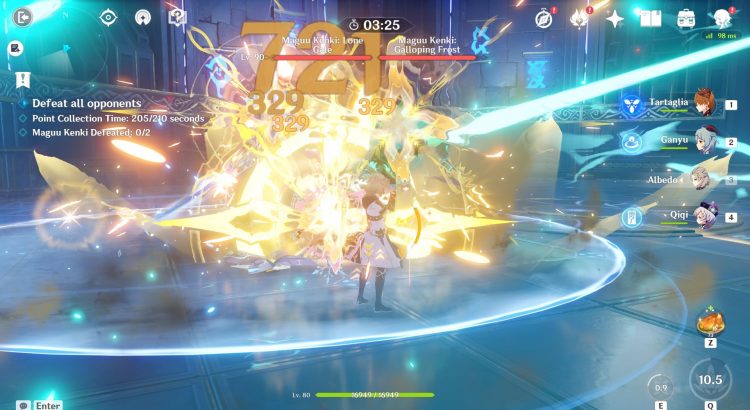 Next up, Maguu Kenki: Galloping Frost will usually do its Cryo Blast ability. It’ll lift its hand, then strike the ground to deal massive AoE damage. This will often be a one-hit kill as well. Worse, the ground will be coated in Cryo, continuously damaging you if you’re inside.

The Maguu Kenki: Galloping Frost also has two additional abilities. The “tell” is when it sheathes its sword, like Kenshin Himura: 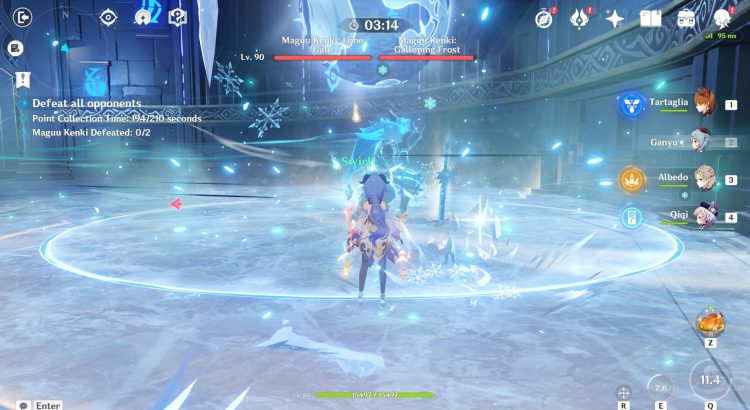 The biggest danger in this fight is that you can easily suffer from burst damage due to a combination of abilities from both opponents. One moment, your characters are at full health. Then, within a split second, they’re suddenly dead. This is also compounded by the fact that the Cryo Maguu Kenki likes to follow you around. There’s a chance that your camera’s POV is facing it, leaving you unaware when the Anemo Maguu Kenki is firing its Blade Winds.

To make matters worse, one of the flairs requires you to kill the two of them in quick succession. If you kill only one target and roughly five seconds elapse, it’d get revived with 75% of its HP. 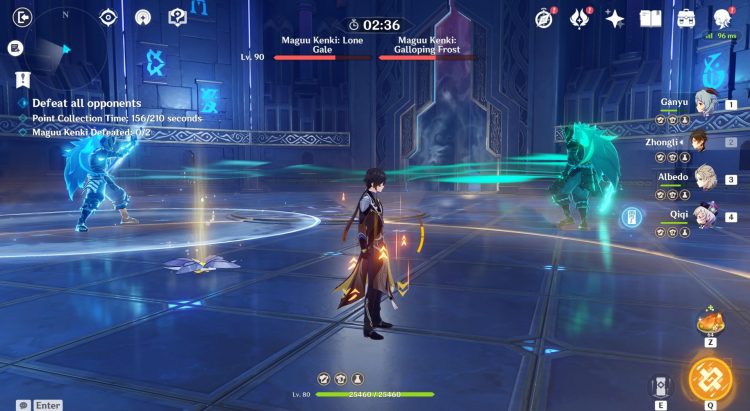 My suggestion, especially if you’re not going for the max score, is to no longer bother with the revive modifier. You’re better off focusing your DPS on the Cryo Maguu Kenki, treating it as a separate boss fight while avoiding the Anemo samurai’s projectiles from time to time. Remember, you only need a minimum of 4,250 points from each challenge. So, if you already obtained extra points in the previous days, then you can avoid the hassles in this fight.

In my case, I just used Ganyu, Zhongli, Albedo, and Qiqi. Both Zhongli and Albedo slightly helped with shielding (though their shields can still easily break due to the high damage from your opponents). Ganyu, naturally, was my main DPS. If you could get the two samurai clumped together, then her burst and charged attacks will easily take out a chunk of their HP. All characters also helped with elemental bursts when necessary to avoid fatal abilities from the two Maguu Kenki bosses. 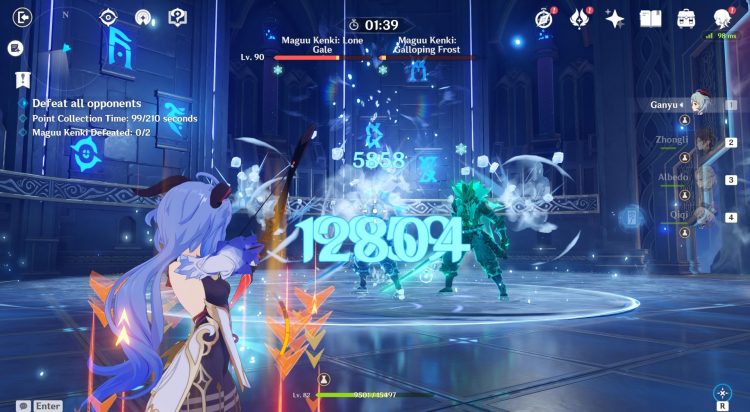