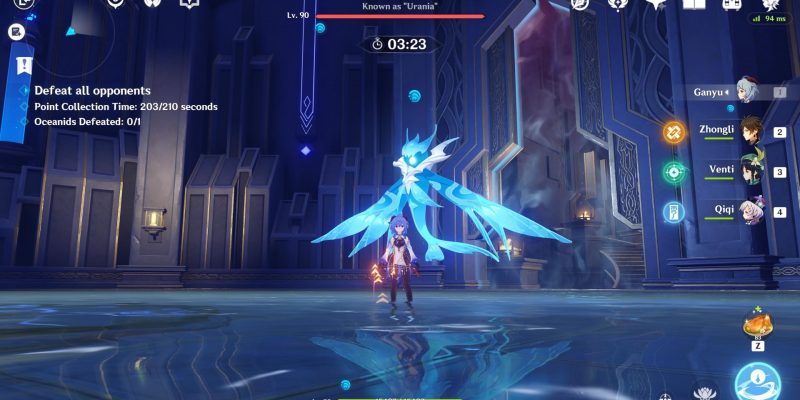 It’s the second day of Genshin Impact‘s Legend of the Vagabond Sword event. This time, you’re fighting an Oceanid known as Urania. She actually has several abilities that will remind you of the Rhodeia’s Rage event back in April. Here’s our Genshin Impact guide to help you with the Legend of the Vagabond Sword event’s Oceanid Urania boss fight, as well as its modifiers and flairs.

The characters with a +20% damage bonus this time around are Eula, Klee, Rosaria, and Hu Tao. Next, let’s take a look at the modifiers and flairs for the Oceanid Urania boss fight:

The automatic damage that your characters can take is one that you need to watch out for. Although characters cannot die from this (since they’ll only lose a percentage of their current HP), they can end up at very low health when you least expect it. If the Oceanid or its Hydro Mimics manage to hit you, then that could turn out to be a killing blow. As for the Oceanid-specific modifiers, these will simply increase the number of spells or objects that can be used to damage you. 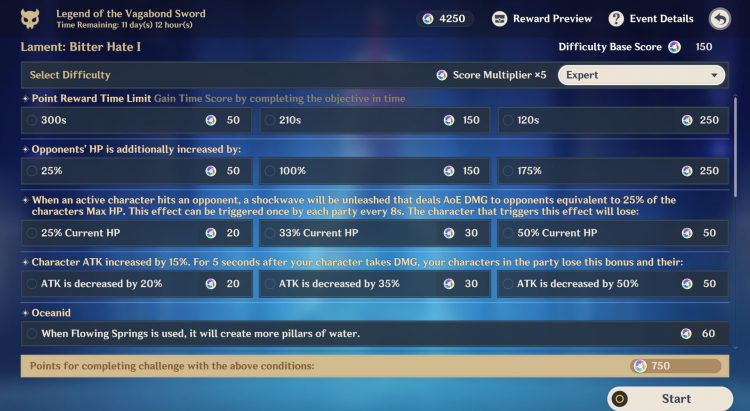 In my case, I only opted to get 4,650 points here with “Expert” difficulty selected. I chose a 210-second time limit and an extra 25% HP for enemies. I did max out the other modifiers.

As for the flairs, the ones I didn’t choose were Cryo resistance and decreased normal/charged attack damage. 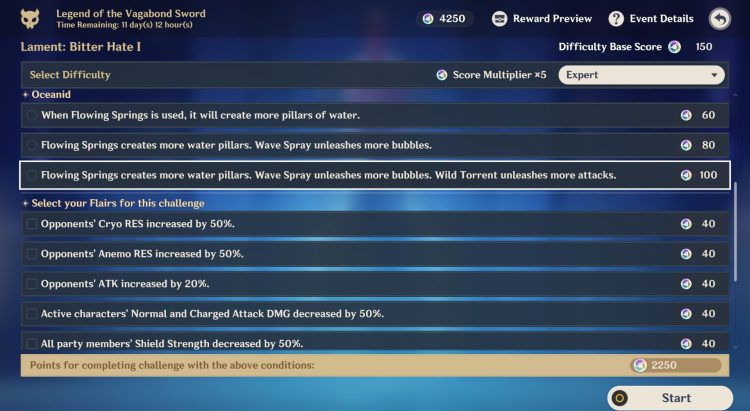 So, what exactly can you expect from the Oceanid Urania boss fight in Genshin Impact‘s Legend of the Vagabond Sword event? Well, Urania starts the fight by floating around, then she’ll blitz straight toward you (it’s fairly easy to avoid now, but she will do her dash attack often much later).

Meanwhile, her Hydro Bubble spell can be nullified if you’re using a character who spawns a construct (i.e., Geo Traveler or Zhongli). These objects can block the bubbles, though you still need to be further away if you don’t want to get hit by the AoE explosion. 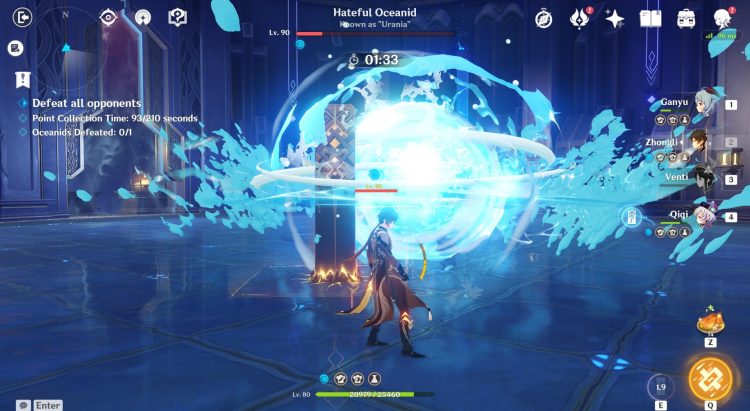 For the Hydro Mimic mobs, she’ll summon two ferrets and two raptors (crows) after the first Hydro Bubble. Try to use Cryo skills/bursts or petrification abilities to freeze them in place.

Likewise, don’t let the flair fool you because the Oceanid will also summon crabs a bit later after she uses either one of her ultimates. 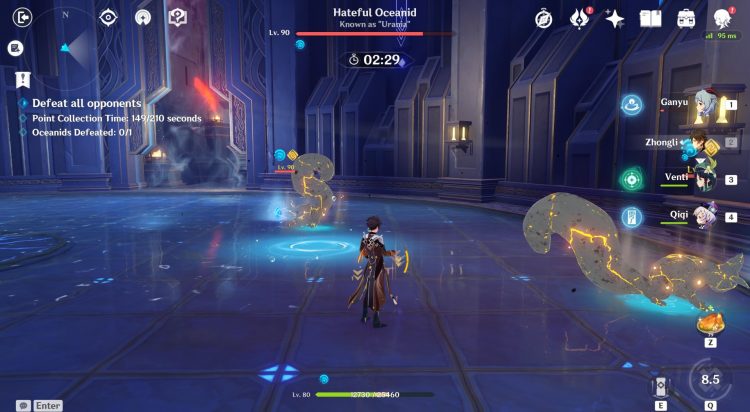 Speaking of her ultimates, she can either do the Water Cannon or Giant Bubble. It’s imperative that you move to the spot with the Fitful Rapids (i.e., the Hydro elevator that keeps you above ground). This is also a great time to deal damage if you have a bow-wielding character.

You do need to watch out because Urania can cast Wild Torrents immediately following her ultimate (or the Wild Torrents might still be on the ground prior to this). These pulsing spots will cause Hydro damage if you’re standing with the area. If you’re on the “Hydro elevator” and you land on these areas, your character might end up dead if they’re already low on health. 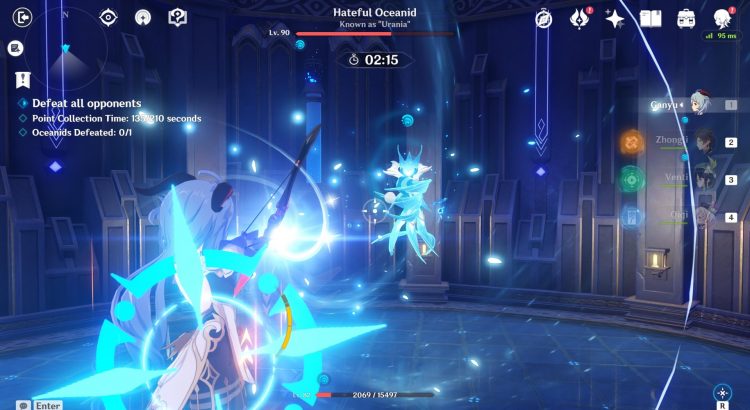 For my clear, I decided to use Ganyu, Zhongli, Venti, and Qiqi. Ganyu was my main DPS, and she’s invaluable due to her charged attacks while the Oceanid’s casting her ultimate and you’re on the Fitful Rapids elevator. Meanwhile, Zhongli’s there to block Water Bubbles and to help petrify mobs. Both Ganyu and Qiqi (as a healer) could also help with crowd-control thanks to their freezing capabilities. Lastly, I thought that I’d use Venti for his elemental skill that would allow me to stay airborne longer (in case I had to avoid an ultimate spell). But, this little quirk was completely unnecessary.

Anyway, this is what you can expect from this boss fight. Don’t forget that we’ll cover the remaining encounters in the coming days, so stay tuned. 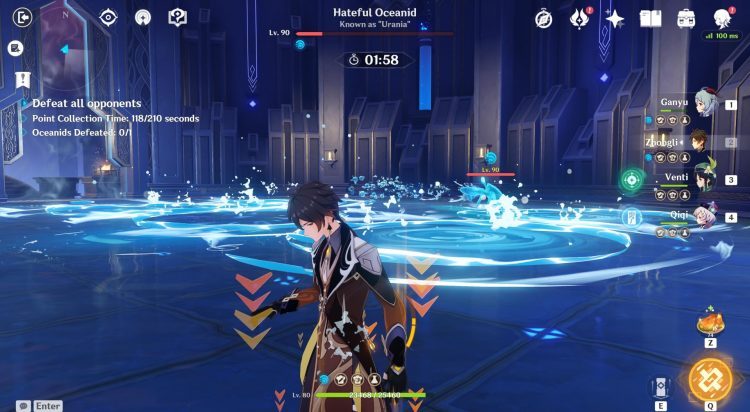