The basics: How do we solve these things?

Let’s talk about the puzzle mechanics in the Orobashi’s Legacy quest in Genshin Impact.

Your goal here is to repair a device known as the ward (something that each area has). The wards have two components that are missing and you’ll need to search for them. More often than not, these components can be found in locations inside a gigantic water barrier.

There are times when the game will tell you to use your elemental sight (middle mouse button). However, this can lead to a bit of confusion due to the lines and markers. Still, you’ll see several pillars that you can interact with. You can change their orientation (i.e., rotate them so they face a particular direction) or their elevation (i.e., aim higher or lower). The one with a bright purple glow is what I call the generator. When you hit it with any attack (melee or ranged), it’ll fire a single energy orb. This projectile will then travel to the other pillars, which I’ll simply call “pillars,”  because why not?

The idea is to ensure that pillars face the next one in the correct sequence, allowing the orb to travel until it hits the water force field. When it breaks, you’ll have access to a new area that lets you pick up the components for the ward.

Note: For the remainder of the guide, I’ll number the generator zero (0). The other pillars will be numbered from one (1) until the last part of the sequence. 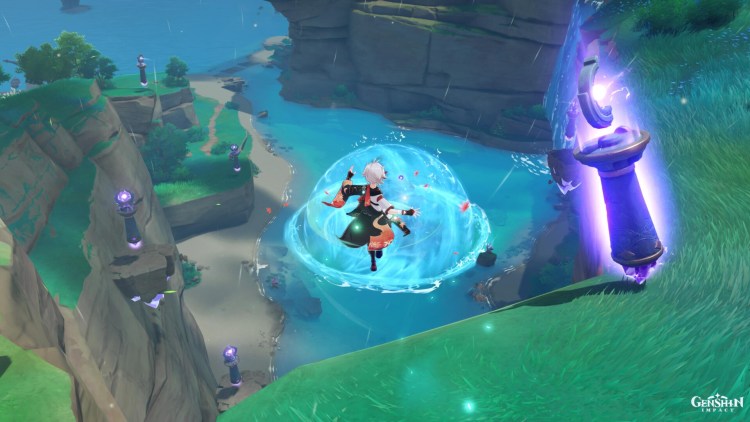 Mind you, one of the biggest downsides while doing these puzzles is the camera angle. It can be hard to discern if a pillar is facing the correct way. You’ll also need to climb often due to these objects being far apart.

Thankfully, you can interact with the Thunder Bough plants to spawn Electrograna. These will let you use the grapple to reach higher areas. You can easily make your way back to the generator (0) to start the sequence and to double-check if your sequence/selections were correct. Diablo II: Resurrected is getting quality of life changes and accessibility options

By Mike Straw8 hours ago
Guides