This puzzle is found in Jakotsu Mine. To be clear, this one can be a doozy because of the cramped space, camera angles, and elevated ledges.

For now, do a fly-by once you reach the area. I’ve outlined the sequence in the image below. However, your perspective will change once you’re on the ground.

Here’s the gist (assuming that you start the sequence while facing the generator and the pillars): 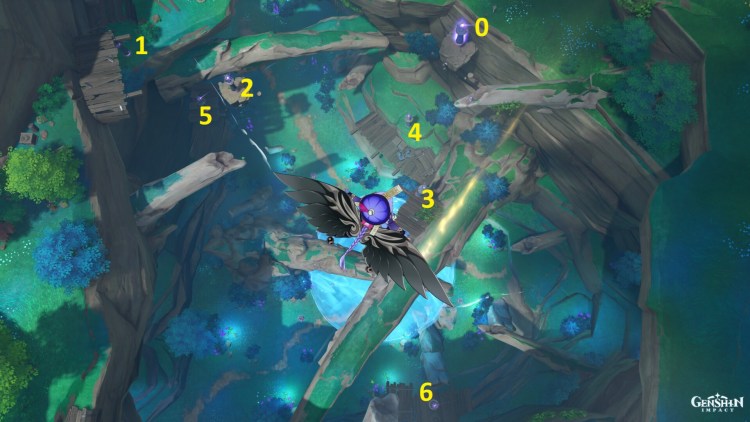 With the water force field destroyed, you should be able to jump down. The ward is here, but you don’t have the components yet. They’re found at the pathways to the west and east.

Let’s go west for now. Follow the path as it loops around. Eventually, you’ll reach an opening that leads to a large cavern with several Electro totems. Here’s what you can expect: If you head to the east, you’ll spot a Seelie and an Electroculi. Follow the Seelie which will take you to another cavern. The goal here is to use the Thunder Bough/Electrograna to pass through the Thunder Barrier. Make sure you eliminate the Abyss Mages as well.

The component is floating in mid-air, so you can use Venti or Kazuha to reach it. Alternatively, you can take the Electrograna buff and run to the right. Climb the dragon bones so you can use the grapples. These will launch you into the air, allowing you to glide and pick up the component. When you’re done, place both components in the ward to finish this task. A notification will tell you that you’ve reached Orobashi’s Legacy Part IV. However, the task here is to simply talk to Kaji in Fort Mumei.

Then again, there’s also a big surprise once you get here. All right, it’s time to solve the final puzzle in Fort Mumei and obtain the Kitain Cross Spear. Diablo II: Resurrected is getting quality of life changes and accessibility options