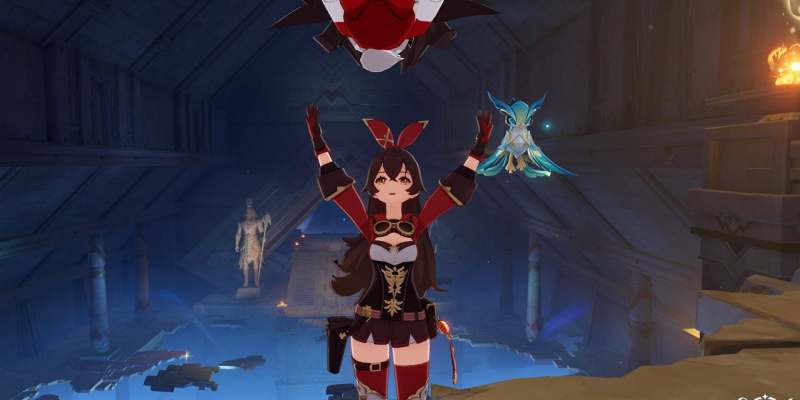 Once you arrive in the ruins of Duat Hall in Genshin Impact, Paimon will offer some clues. It looks like you’ll need to gain full clearance with the Scarlet Stone Slate by visiting three areas. Here’s our Genshin Impact Place of Rebirth and Place of Swallowing guide to help you with the puzzles as part of the Dual Evidence quest.

View the Scarlet Stone Slate in your quest items tab and track the locations. The Place of Swallowing in Genshin Impact is supposedly third if you’re looking at the list (it’s also the third one I did). However, the tasks are right in Duat Hall anyway.

Note: I’m not certain if all these locations need to be visited in order to provide access to the next one. Assuming that’s how it goes, you’ll have to do Place of Rebirth -> Place of Breath -> Place of Swallowing.

In any case, your goal here is to tag and follow the three embers until they reach the large torches in the bottom chamber. Two are found on the raised platforms to the side, whereas the third is on a lower platform.

The task is fairly easy. You just need to watch out for the fans that might blow the embers away. Once all three sparks light up their respective torches, a beam of light will increase the clearance of your Scarlet Stone Slate.

To reach the Place of Rebirth in Genshin Impact, you’ll need to use the fast travel point outside Duat Hall. As long as you’ve got the location tracked, an icon will show you where to go.

Basically, you’ll pass through a small tunnel underneath some rubble. From there, you’ll spot an ember that heads to a torch.

In the next room, pick up the keystone and stand on the hologram projector so you can grab the cell. Run around the room so the spectral torches start materializing, and light these with Pyro.

Follow the ember back to the main chamber. Once it reaches its destination, the water will be drained.

Head to that section of the temple now that it’s accessible. The bottom room here has a puzzle where two beams are blocked by obstacles. The goal is to move the cell of one so it reaches the middle. Do the same for the second cell.

Move both of these once more until they reach the opposite side, connecting the beams and unlocking the ember’s pedestal. This lets you tag the floating spark to fully activate the device, claiming another clearance increase.

All right, we’re done here. Let’s go ahead and visit the Place of Breath in Sekhem Hall, which is an even bigger area with a bunch of stuff to do.