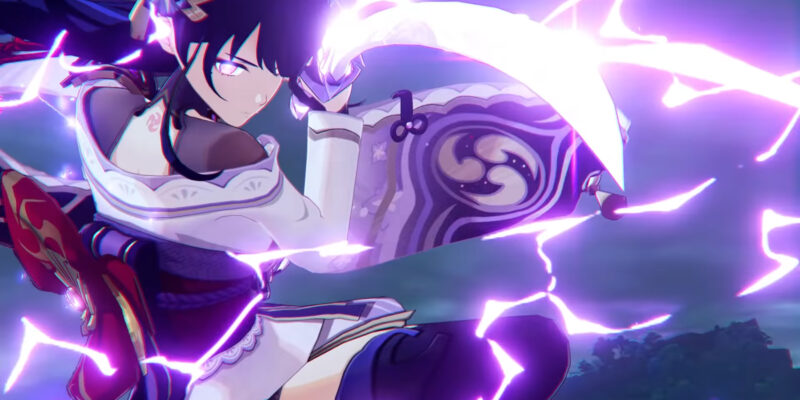 There’s been a lot of hype around Genshin Impact Version 2.1, which releases tomorrow, and the Raiden Shogun has been at the forefront of a lot of the recent content we’ve seen. Last week, we got a first look at her impressive lightning-based abilities. Now, developer miHoYo has released a character demo for the Raiden Shogun, which shows her powers fully unleashed.

The Raiden Shogun will be one of three new characters released with Genshin Impact Version 2.1, Sangonomiya Kokomi and Kujou Sara being the other two. For PlayStation players, Aloy from Horizon Zero Dawn was also just released. PC players will need to wait for Version 2.2 to get access to her.

The Raiden Shogun is a five-star Electro Polearm-wielding character available through the Reign of Serenity Event Wish. During this event, she will gain a huge boost to her drop rate. The event begins tomorrow with the launch of Version 2.1 and will run until September 21. After which time, the next of the Version 2.1 characters, Sangonomiya Kokomi, will be available in a new Wish Event.

The Raiden Shogun abides in the land of the Narukami, which translates to lightning. She is the mistress of the realm and resides at its heart. She promised the people of Inazuma an unchanging eternity because she believes this is the way to be closest to the Heavenly Principles. Her beliefs are reflected in her ever-serene attitude.

Watch the Raiden Shogun wield her Electro Polearm, unveil a shard of her Euthymia, and lay waste to foes with her Secret Art, Musou Shinsetsu, in her character demo below.

Alongside the Raiden Shogun character drop, September is a also good month for Genshin Impact players who have Prime Gaming. You will be able to claim 60x Primogems, 8x Hero’s Wits, and 5x Calla Lily Seafood Soups for the game next month as part of your Prime subscription.

Maneater: Truth Quest — Is it worth it?