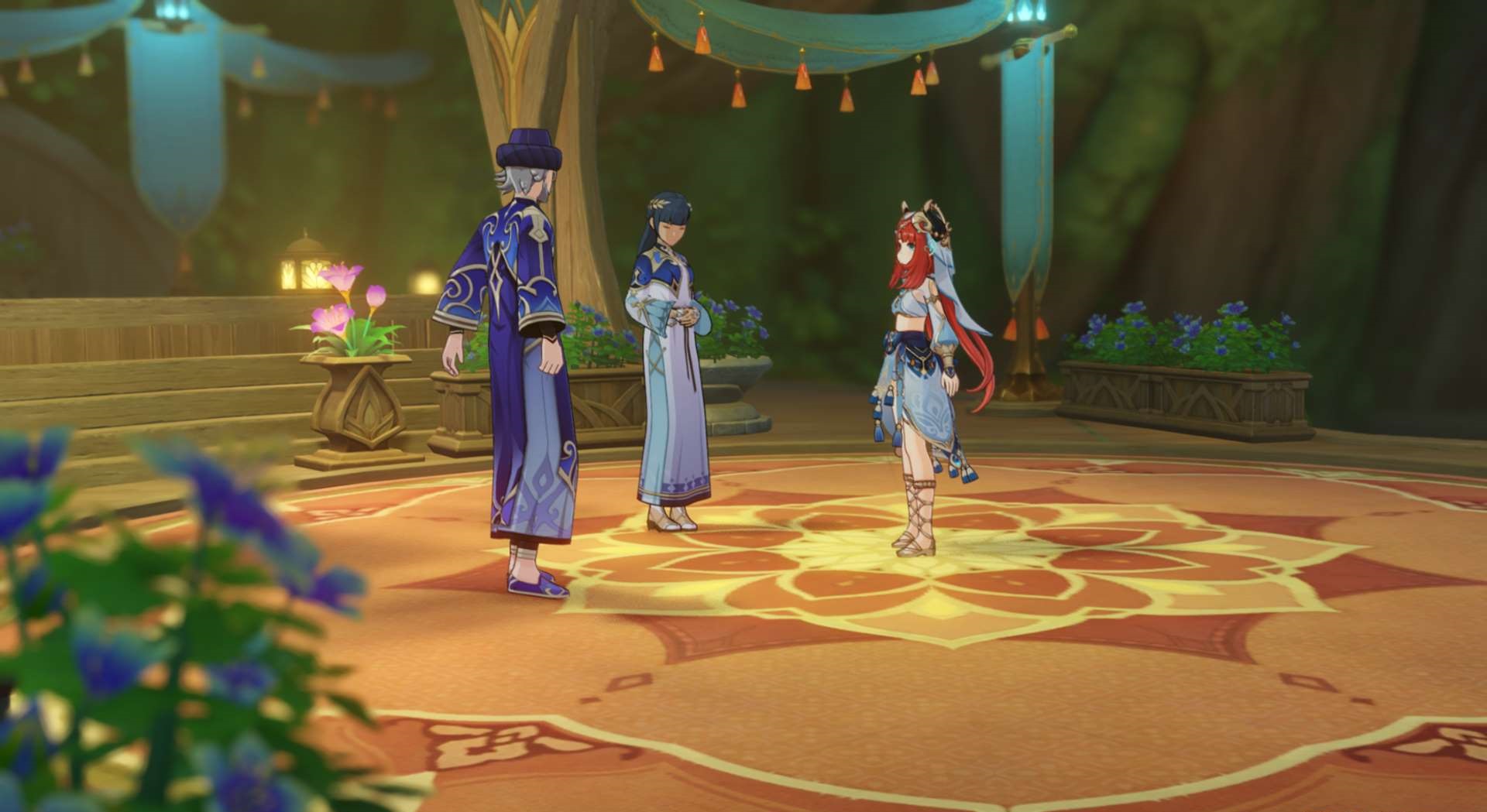 Your trek through the Sumeru region in Genshin Impact has taken you to Port Ormos to meet Alhaitham and Dori. Now, it’s time for Archon Quest Chapter 3 – Act 2, known as The Morn a Thousand Roses Brings. It entails solving a strange mystery that’s been going on in Sumeru City. Here’s our Genshin Impact guide to help you with the Sabzeruz Festival contemplation puzzles, Dunyarzad’s condition, and Nahida’s identity. Oh, and I should probably say that this is one of the best quests in this game. It’s a fairly lengthy one, but you’re going to enjoy it.

Note: For more information about the game, check out our Genshin Impact guides and features hub. You can also take a look at our main guide if you’re just starting out in Sumeru. Lastly, please be reminded that this guide contains minor spoilers.

Everything seems normal at first

At first glance, the quest with the Sabzeruz Festival in Genshin Impact seems like your run-of-the-mill activity. The Traveler will meet Dunyarzad, and the they’ll walk around in Sumeru City to talk to various NPCs. Still, pay attention to how the fortune teller talks about “the moon’s lies and deceit,” and how the candy maker’s sunsettia sweets are in box #4.

You’ll also encounter a bunch of kidnappers, but Dehya will handle them. Instead, you’ll have to run back to the plaza before a minute elapses. Once there, Dunyarzad will admit that she also has the Eleazar (i.e., Grayscale) illness. She’s suffering, but she also wants to see Nilou perform at the festival.

Sadly, the Akademya sage and his cohort end up suspending the celebrations. The group will leave dejected, and the Traveler and Paimon will go to sleep.

Then, upon waking up, the Traveler has a strange feeling of deja vu. You’re basically reliving the events of the previous day, even reading/picking the same dialogue in some instances.

Is it a time loop or something more sinister? Whatever the case, it definitely came out of the left field.

Eventually, you’ll notice someone darting off in the distance. Follow this person until you arrive at the northern section of the city (make sure you tag the nearby fast travel point, too, since you’ll come back here often).

That person is Nahida, who claims that everything that’s happening is part of a loop – a “samsara.” Nahida also reveals that the “real” Dunyarzad is there, resting, due to her illness. 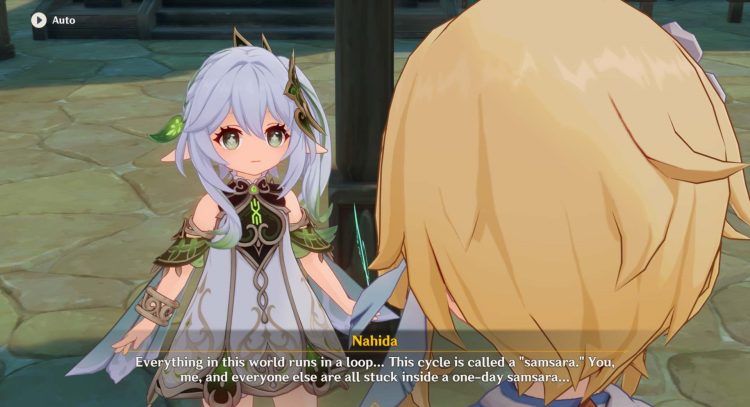 What follows next are the Sabzeruz Festival contemplation puzzles. Think of it as akin to an overly simplified form of deduction from the Sherlock Holmes or murder mystery games.

For the first segment, choose “The Sabzeruz Festival Samsara” and “Deja Vu” to get “Time loop.” Submit this to get Nahida’s answer. It’s definitely not Groundhog Day or Edge of Tomorrow. 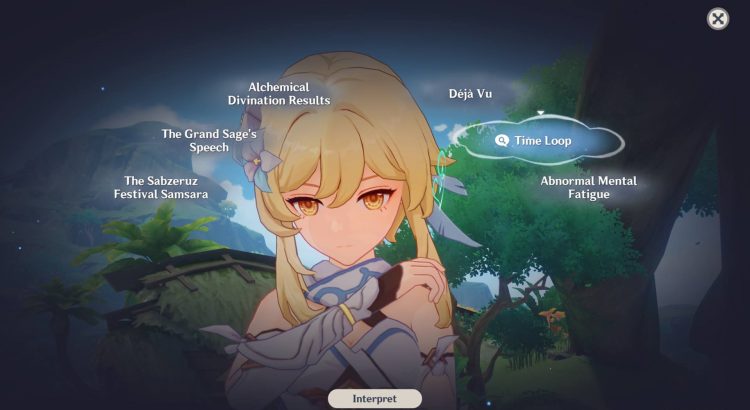 Next, when you meet Dehya, submit your response about “Dehya’s Claymore.” Shortly thereafter, Dehya will be convinced.

Take her to the bed where Dunyarzad is resting so she can sense her. Choose “Information on the Akasha” for this one. 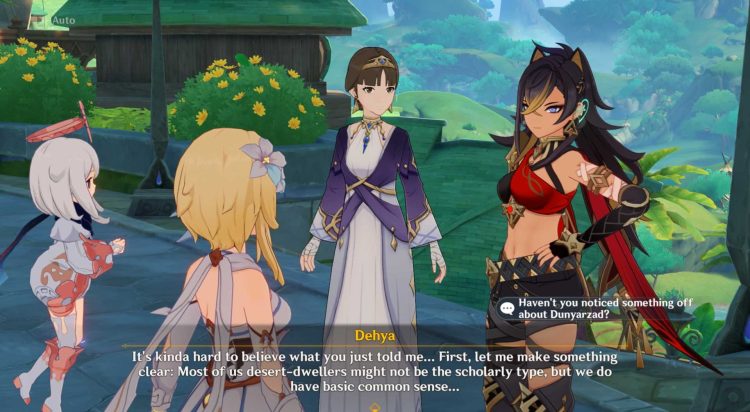 Follow the prompts when necessary to progress further. In the next Sabzeruz Festival contemplation puzzle, choose “Bodily Memories” and “The Akasha’s Sound.” This will generate “Memories are Deleted Everyday.”

Sadly, the next time you talk to Dehya (another loop), she debunks this theory by showing the cuts she made on a training dummy. 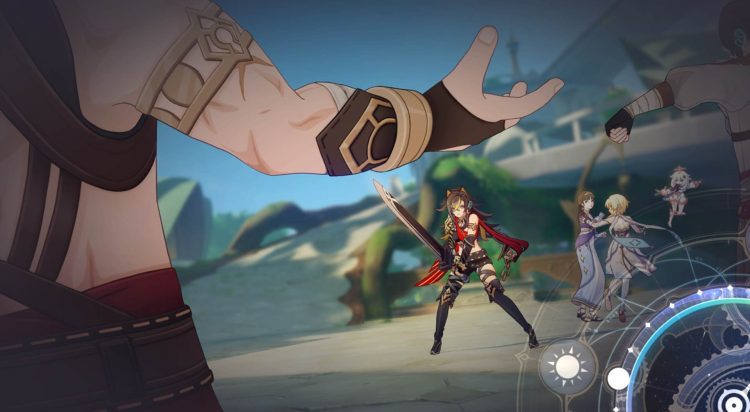 Fast forward a bit, and you’ll get scenes where the Traveler is attempting to leave Sumeru City (with Paimon crying in the distance). There’s also a bit where the Traveler disappears after wandering too far away, and segments where “mute puppets” are just walking around. There’s even talk of how “spaces keep disappearing.”

For the next part, pick “The Space Where We Were Yesterday” (as the ones that are disappearing). I sense The Langoliers vibes there. 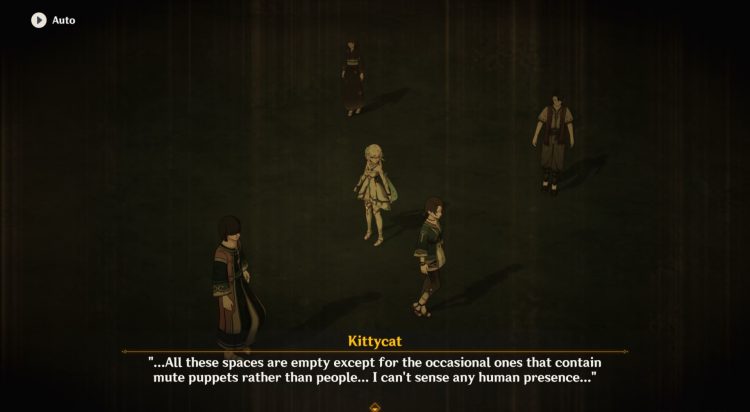 There are a few more Sabzeruz Festival contemplation puzzles in Genshin Impact that you need to solve to understand what’s going on: 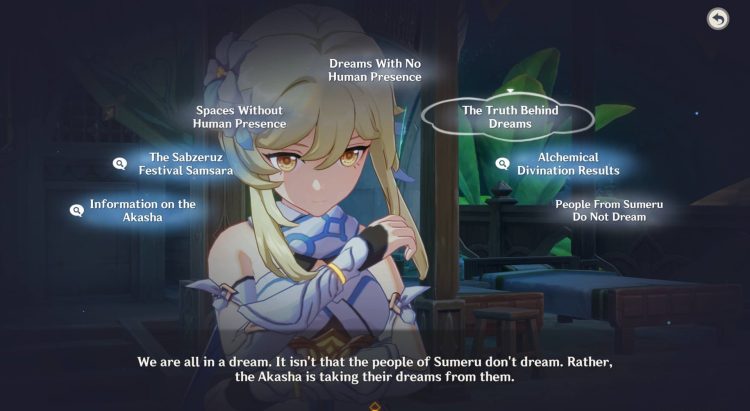 Long story short, the Sabzeruz Festival in Sumeru City seems to be a ploy by the sages to use the Akasha, the virtual information database, as a means of toying with the populace. It’s not that the people of Sumeru don’t dream. It’s that everyone in the city is sharing one collective dream, and a single person is the “host.” Nahida also admits that she’s Lesser Lord Kusanali, the Dendro Archon.

Note: One of the questions you can ask Nahida is about the Sabzeruz Festival dream. The dialogue/contemplation will lead to a loop, so just pick “I don’t have anymore questions” to end the conversation. 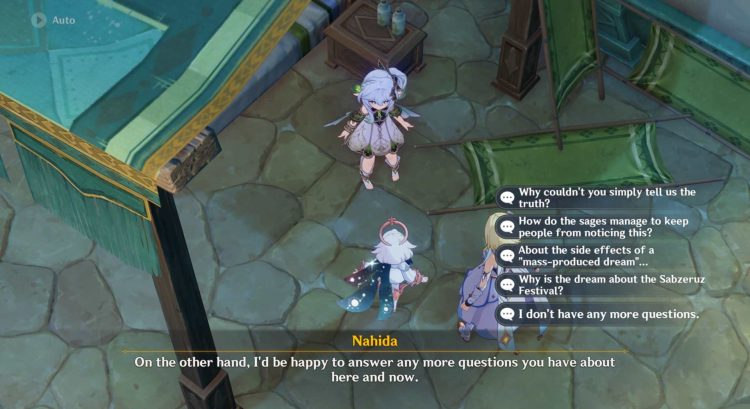 Nahida tells you that to break the cycle, you should find out who the “host” is and get them to realize that they’re dreaming. You’ll have to talk to a couple of NPCs and fight some mercenary baddies here.

Eventually, the Traveler decides to prevent the sages from interrupting Nilou’s festival dance. Nilou realizes that she’s the dream host. She then starts to perform while all the dreamers watch on, including Dunyarzad’s fading consciousness. 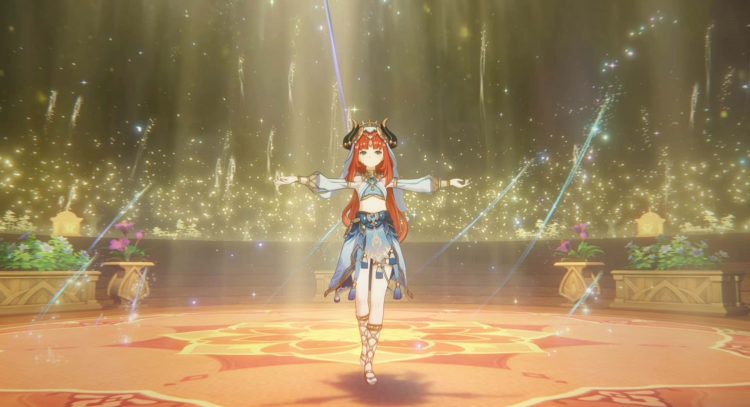 The next day (no longer part of the samsara loop), Dunyarzad wakes up and starts her recovery. You’ll also get to talk to Nahida, who’s taken over Katheryne’s body via the Akasha (yikes!).

This completes the Sabzeruz Festival portion of the Sumeru Archon Quest in Genshin Impact. As a reward, you’ll receive a Memory of Flourishing Green to boost the Dendro Traveler’s Constellation. 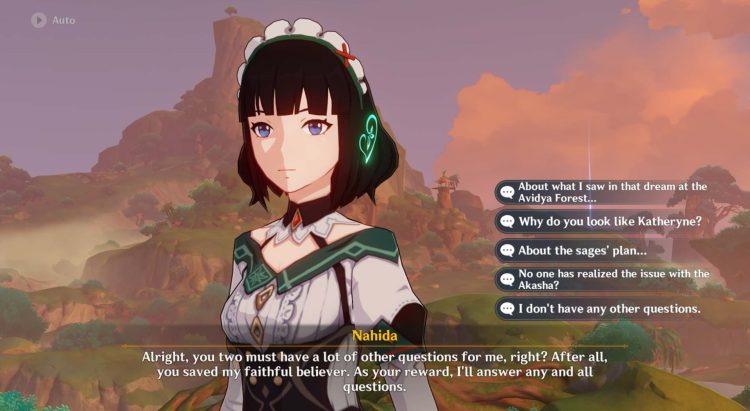