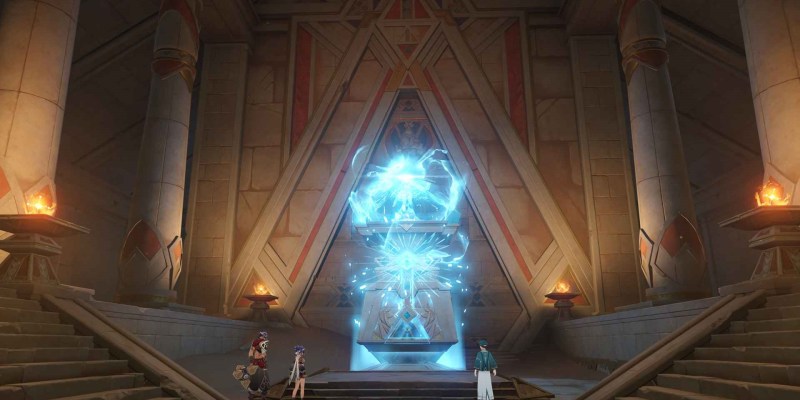 It looks like you’ve managed to enter the Mausoleum of King Deshret in Genshin Impact. That’s just one particular section of this area. In fact, there’s actually a massive underground city that you’ve yet to discover. Here’s our Genshin Impact Golden Slumber guide to help you with the Secret of Al-Ahmar portion of the questline.

Note: For more information about the game, check out our Genshin Impact guides and features hub. You can also take a look at our main guide for the Golden Slumber quest chain.

You’ll receive the Golden Slumber – Secret of Al-Ahmar quest in Genshin Impact after acquiring a clearance level upgrade in the Mausoleum of King Deshret. A short cutscene will play, whereupon the Traveler wakes up with only Paimon beside her. Go outside and you’ll spot your pals battling Fatui. Once you take them out, everyone realizes that Benben has disappeared.

Follow the underground pathway as it loops around. There are a lot of side passages and tunnels here, so it’s up to you if you wish to explore or focus on the main objective.

Eventually, you’ll stumble upon a teleporter. Below that is a Fatui camp where you’ll meet an assassin named Samail. It looks like he and Jebrael have a long history (the merc admits that Samail was the one who killed his wife).

After eliminating the hostiles, follow the markers until you arrive at Opet Hall.

Inside Opet Hall, you’ll notice a Seelie that floats around the room before heading up the steps. Likewise, there’s a keystone here that you can bring to the glowing plate. Touching the mechanism lets you claim a cell.

While it’s active, run around where the Seelie went so the spectral totems start to solidify. You can hit these with Pyro to spawn a chest.

Anyway, head to where the Seelie is. You’ll find a large chamber with several contraptions that can be rotated:

Behind those doors are two small rooms. One has an object called the Primal Obelisk. It shows you the location of nearby Sacred Seals. These items are the ones used to restore the obelisks, too.

The other room has a keystone and plate that spawns an ember. Follow it outside the chamber until you notice yet another keystone on top of some rubble.

Don’t mind it for now and just continue onward, climbing to the top until the ember touches the temple’s torch.

Next, go back to where you saw the second keystone. Switch the placement of the beam crystal to open a door. The small room here has another beam. Rotate it so it hits the switch.

Then, switch the crystal back to its original position. This will let you release the ember from the pedestal.

Take the ember all the way to the temple’s entrance where its counterpart is. This will let you pass through.

Beyond is another machine that boosts the clearance level of your Scarlet Sand Slate. Moreover, a map shows the possible location of treasure, one that your newfound NPC pals can’t wait to get their hands on. What follows next is another part of the Golden Slumber questline called Dreams Beneath the Searing Sands.

The Finals, a multiplayer FPS from ex-Battlefield devs, got a trailer that features staggering map destruction