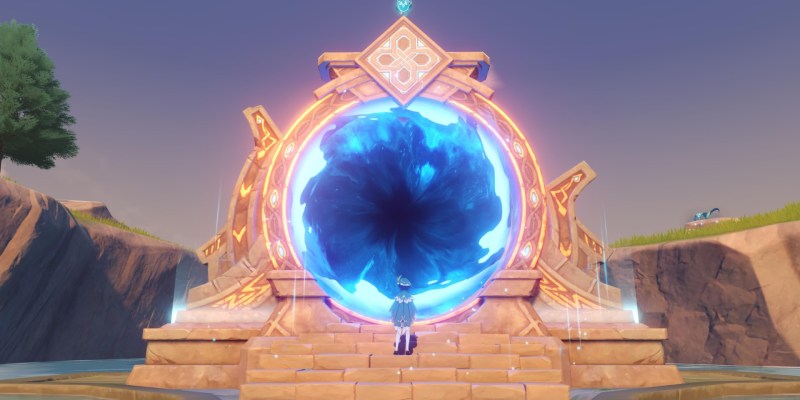 The Spiral Abyss is considered as one of Genshin Impact‘s pinnacle activities made available only once you reach Adventure Rank 20. It requires a lot of patience and time owing to the game’s notorious grind. You’re expected to have leveled up your characters and, yes, a bit of luck from Wish microtransactions also helps (if you want S-tier companions with you). Anyway, here’s our guide to help you out. Genshin Impact: What is the Spiral Abyss?

Genshin Impact‘s Spiral Abyss dungeon won’t be available at the start. First, you’ll need to reach the Cape Oath sector in southeastern Mondstadt (seen in the map above). Once you get there, you’ll notice an ominous-looking portal. You won’t be able to reach this portal unless you look for the three Seelie and have them reach their altars at the center of the area. After doing that, a wind current will appear.

This lets you glide all the way to the portal to reach the Musk Reef area. This small island cove has the entrance to Genshin Impact‘s Spiral Abyss dungeon. How does the Spiral Abyss work?

Think of the Spiral Abyss as an endless dungeon of sorts in Genshin Impact. While it does have an “end,” the road to reach it is so long and arduous that no one has even beaten it yet. The point is that it’s a grind, and it’ll mean having mastered Genshin Impact‘s combat mechanics and elemental chains, as well as having the right characters for the job.

Just to be clear, once you start your Spiral Abyss dungeon run, you can’t open the menu anymore. You can’t cook/eat, level-up characters, change equipment, and so on. As such, you better come in prepared so you can progress further. The good news is that your furthest progress is saved. You can always start from the next floor/chamber in sequence, or you could redo previous encounters in the hopes of obtaining all the rewards. Anyway, the Spiral Abyss has a blessing that remains active all throughout your run. This time, it’s the Blessing of the Abyssal Moon: 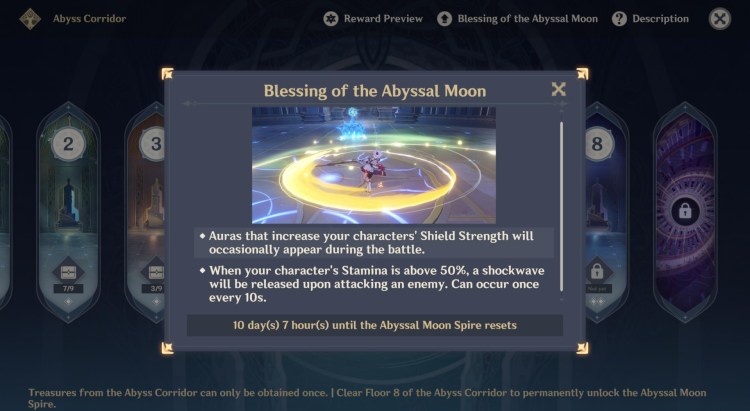 Your run will consist of going through the Spiral Abyss’ many floors, with each floor having three chambers. Each chamber you reach will also present you with a choice on which temporary blessing to pick up. Some last for one chamber/encounter, while others are active for the entire floor. Here are some examples: Genshin Impact‘s Spiral Abyss dungeon already has the Blessing of the Abyssal Moon buff that’s active all throughout. Likewise, you’ve got your buff selection that appears when you reach new chambers. Still, you’ve got “Ley Line Disorders” — modifiers that are active for that floor. Here they are courtesy of Genshin.gg:

After clearing all encounters on the eighth floor, you’ll unlock even more floors as part of the Spiral Abyss’ next section. Yep, it’s gong to be a doozy — no wonder it hasn’t been fully cleared yet. As mentioned earlier, the Spiral Abyss’ floors/chambers offer multiple rewards. If you click on the “Reward Preview” button, you’ll see all the rewards you can obtain just by clearing these chambers: 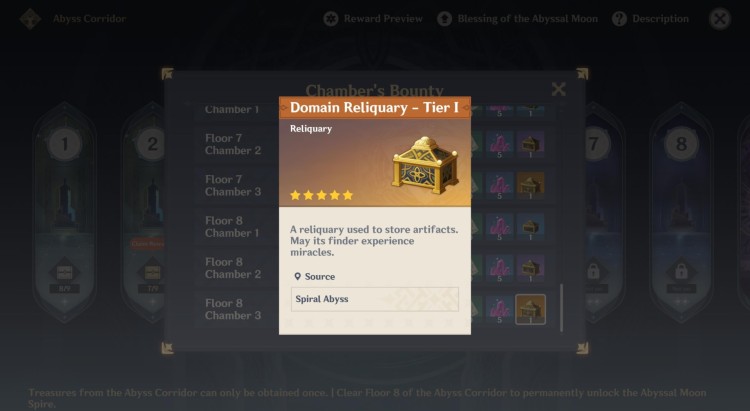 Meanwhile, there are also additional rewards that can be obtained depending on the number of “stars” you’ve acquired. Stars are basically “clear requirements/clear ratings.” If you finish the encounter quickly, or if you complete certain requirements with ease, you can get a maximum of three stars for that chamber. That means each floor nets you a maximum of nine stars.

The more stars you obtain after clearing a floor, the bigger the rewards. For instance, clearing the first floor alone with nine stars nets you a whopping 300 primogems and 60,000 gold. 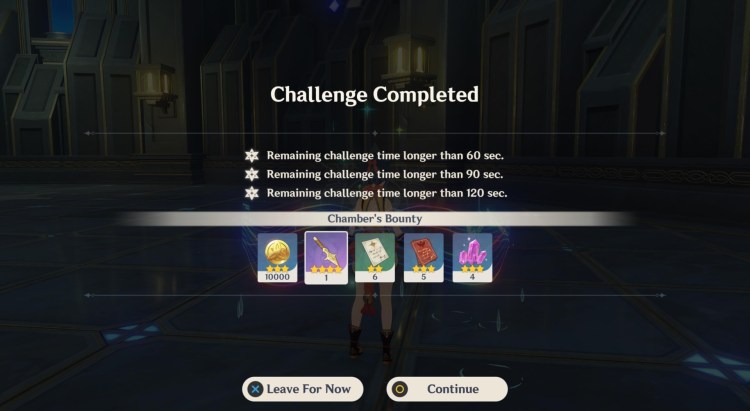 As for the encounters, most of these won’t surprise you since you’ve encountered the enemies throughout your journey in Genshin Impact. They will, however, tend to be a swarm — many chambers require you to eliminate 20+ mobs. Likewise, a few other encounters might have different objectives, such as preventing a crystal from taking damage.

Because of so many mobs surrounding you, it’s best to focus on high DPS characters and those with significant elemental chaining capabilities. My suggestions would be Venti, Diluc, Fischl, Xiangling, and other 4-star or 5-star characters. Healers (i.e., Jean, Barbara, and others) will also be needed since you can’t eat food while inside the dungeon. Geo-based/defense-boosting companions are probably unnecessary because speed and damage are your key priorities here. 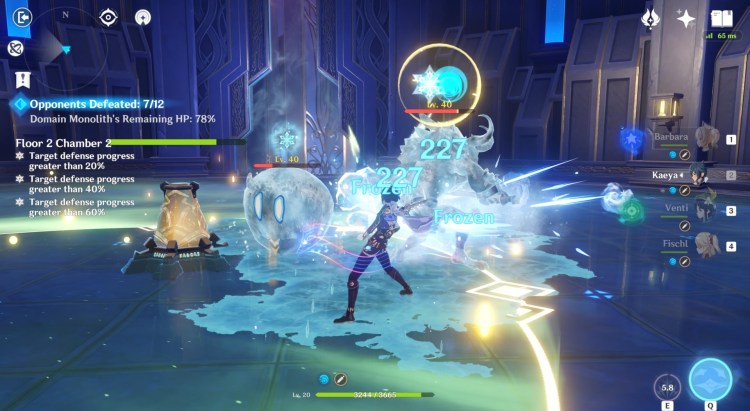 From floor 5 onwards, you’ll also encounter “branches.” Rather than having only one encounter each chamber, you’ll have two. That means splitting up your party into two groups as well, so make sure you’ve got the ideal compositions for both subgroups.

Note: Mobs will increase in levels every floor/chamber, and, by the time you reach floor 9, you’ll be battling against level 70+ opponents. 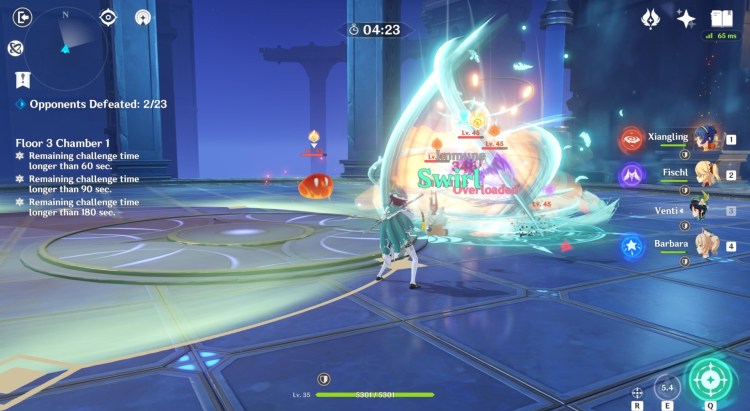 In any case, just try to do your best. If you’re unable to clear certain floors or encounters, simply do a little bit of grinding from other activities. A short-term goal you can have is clearing floor 3 – chamber 3. Regardless of the star ratings you obtain, you’ll still be able to unlock Xiangling.

Note: If you obtained Xiangling already via a Wish microtransaction, the reward you get here will be considered a “duplicate.” You’ll get a “Stella Fortuna” item that unlocks her constellation talents. 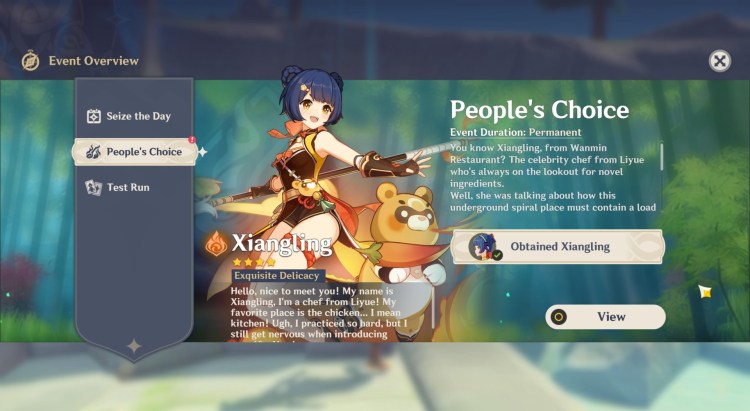 If you’re keen on knowing what awaits you in later stages, here’s a video of a floor 9 clear from YouTuber Oreo:

Below, you’ll see another floor 9 clear from YouTuber Luke. I told you, it’s a doozy. It might even be very costly too.

Genshin Impact: Is the Gnostic Hymn Battle Pass worth it?