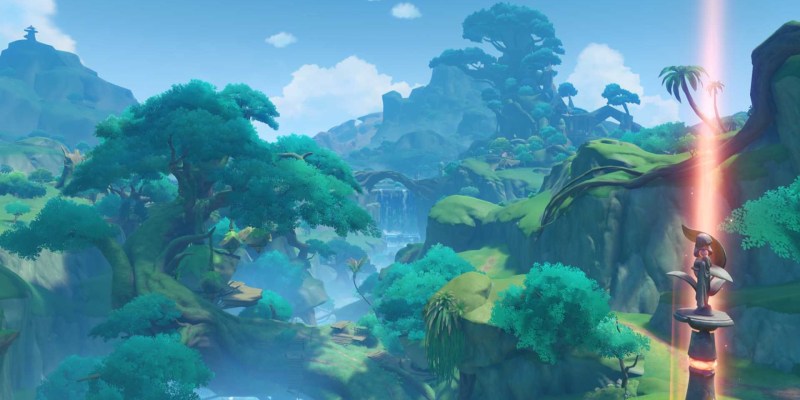 Bear in mind that you’ve only reached the outskirts of Sumeru in Genshin Impact. There’s still a long way to go, as this might just be one of the longest Archon quests in recent memory.

In any case, upon exiting the cave, you should see small golden symbols known as Four-Leaf Sigils. Think of these as akin to grapples — face one and press “T” to “web swing” your way across gaps.

Your goal is to tag the Statue of the Seven on top of the rock formation, whereupon Paimon will notice an odd creature.

The Traveler and Paimon will spot a researcher who isn’t responding to them. This person will head inside a cave next to a waterfall. As soon as your character enters, they’ll feel lightheaded and collapse.

They’ll wake up inside a surreal-looking chamber with a glowing tree. Continue walking and your character will wake up.

This is when you’ll realize that you’re in Gandharva Ville (a location fairly close to the Statue of the Seven).

You’ll also meet Tighnari, the head forest ranger, and Collei, one of the trainees.

For now, just help Collei by checking the lamps (i.e., go to the minimap markers). Collei will then ask you to clean the Statue of the Seven.

Once you’re done, the Traveler, Collei, and Paimon will joke around, until Collei runs away when Paimon attempts to touch her.

Wait until the next day and talk to Tighnari. He reveals that Collei is afflicted with an illness called “Eleazar” — basically Genshin Impact‘s version of Greyscale from Game of Thrones.

Follow the objective marker so you can collect Fresh Nilotpala Lotus plants for her. After talking to Tighnari again, a couple of rangers will ask for help about a “Withering Zone.”

We’ll discuss those kinds of locations in the next part of our Genshin Impact Sumeru starter guide.

By Greg Bargas5 hours ago
Guides