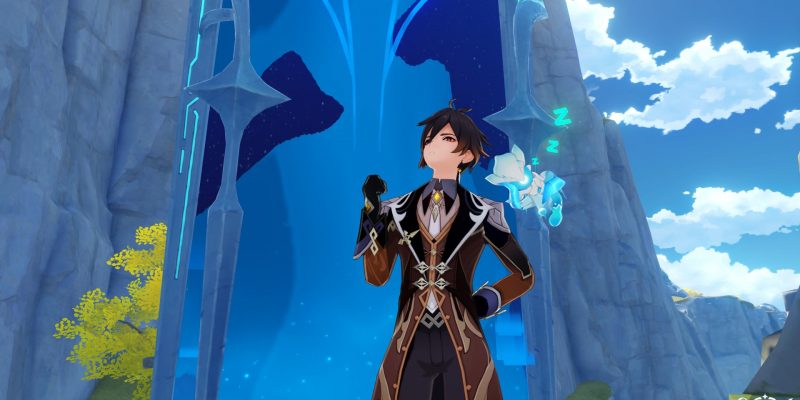 The Twisted Realm has a new challenge for Travelers, and it involves entering the Domain of Chaos. Here, you’ll be up against several Ruin-type foes. You’ll need to beat them down while avoiding a Chaos Cluster, a floating orb that does nasty damage. Here’s our Genshin Impact guide to help you with the Twisted Realm’s Domain of Chaos enemies, as well as a few tips regarding the modifiers, score, and crystals.

Note: For more information about the game, check out our Genshin Impact guides and features hub. You may also check our version 1.5 overview, as well as our main guide for the Energy Amplifier Initiation event.

Funnily enough, the key mechanic in the Twisted Realm’s Domain of Chaos is somewhat unrelated to what you saw in the Frost-Worn Space location that you’ve just finished. In that location, you had to watch out for the hilichurl attendants spawned by Frostarm Lawachurls. Here, though, you’ll need to evade an annoying orb that keeps chasing you around.

If you get hit, your character will suffer roughly 3,500 to 4,000 damage. However, the orb can still be kited towards enemies and mobs will end up taking damage in turn. 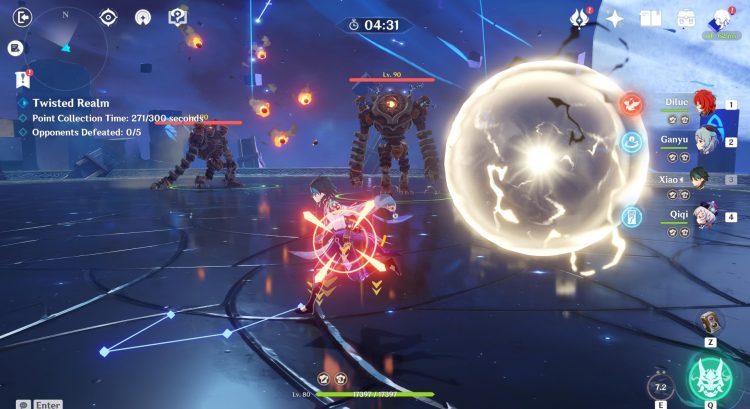 Here are the modifiers for the Domain of Chaos:

The special modifiers provide a massive healing ability to the Ruin-type constructs. You do need to nuke them once they’re low on health. Otherwise, they can quickly regenerate up to 50% of their lost HP within six seconds.
Likewise, you’ll see a buff to the Chaos Cluster (orb), and, mind you, this thing will become a nuisance during the fight. You could find yourself knocked back or disoriented whenever it hits you. Oh, and if the orb’s damage buff is enabled, it can hit for 8,000 points of damage. While it’s possible to kite it towards enemies (so that your foes get hit), it can be a daunting task especially when Ruin Guards, Ruin Hunters, or Ruin Graders start smacking everything around them.

Still, remember that you don’t really need to reach the maximum number of points. You’re better off just getting 5,000 here since another domain (the Domain of Heresy) will be available in a couple of days. In my case, I just picked the 300-second time limit and +25% enemy HP boost. The rest of the modifiers were active except for the Anemo resistance since I was using Xiao. 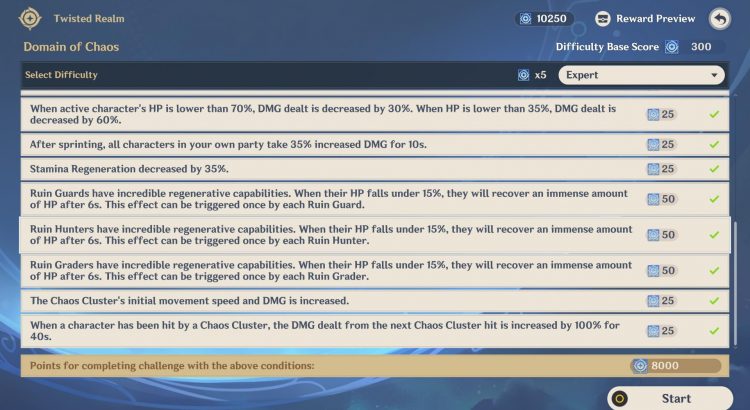 I used several of the new crystals that you can obtain today during Act 3 of the Energy Amplifier Initiation event. Also, speaking of Xiao, most of these are focused on enhancing his capabilities

Note 1: The characters I used for my first clear were Xiao, Ganyu, Zhongli, and Qiqi. Xiao was my main DPS and I was making sure that I could nuke the Ruin-type foes before they reached the 15% quick-heal threshold. Meanwhile, Ganyu and Qiqi helped with freezing effects from the Timely Rain’s proc. Lastly, Zhongli helped with the additional crowd control via his meteor petrification.

Note 2: Another crystal, Galespring, might seem good on paper since it allows plunging attacks to regenerate six energy while spawning a wind current that lets you glide and smash enemies again. Unfortunately, you won’t actually need this since Xiao can gain some energy while another character’s burst is active due to the Overcharge crystal. 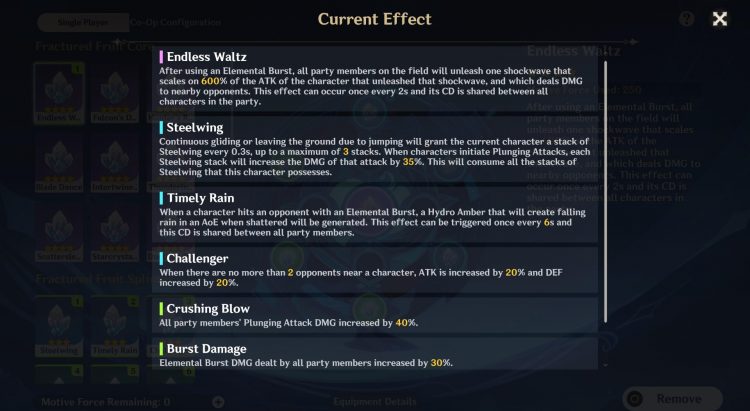 I began the encounter by moving Ganyu straight down the middle of the two Ruin Guards. This made them lumber towards Ganyu instead of firing their missiles. I then popped Ganyu’s burst which caused Timeless Rain to proc, freezing the Ruin Guards every few seconds. While Ganyu’s burst was active, I noticed that Xiao was also regenerating his burst quickly. This was thanks to the extra energy regeneration from Overcharge.

I made sure that the Ruin Guards would get nuked from 15% to zero health in less than six seconds to prevent them from healing a lot. After this, a lone Ruin Hunter spawned. This was also when the Chaos Cluster orb popped up. You can think of this as a bit of downtime if you need to replenish Xiao’s or Ganyu’s energy. Just make sure to keep your characters in tip-top condition if they get hit by the orb. 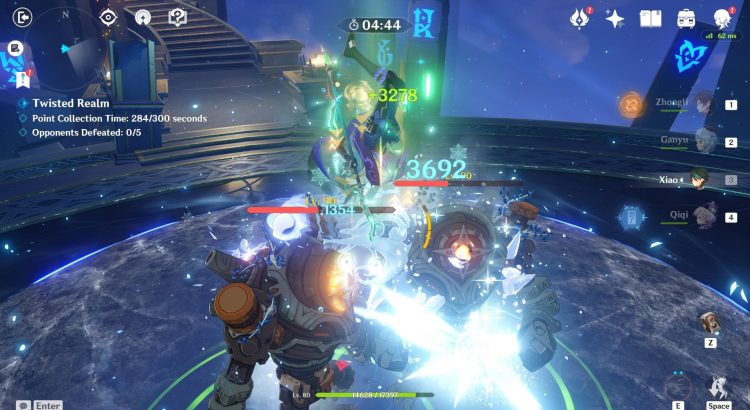 The last part had two Ruin Graders. They might seem like a challenge, but you can treat them the same as the two Ruin Guards that you just fought. Make sure they’re bunched up together, use a burst to spawn the Timeless Rain’s Hydro Amber, use some perma-freeze procs, then annihilate them with Xiao’s ultimate.

It might take you a couple of runs since these robots have a lot of health. But, as always, you’ll need to ensure that you can nuke them once they’re close to 15% HP. If you don’t have the DPS, you won’t be able to prevent them from getting their uber heals. 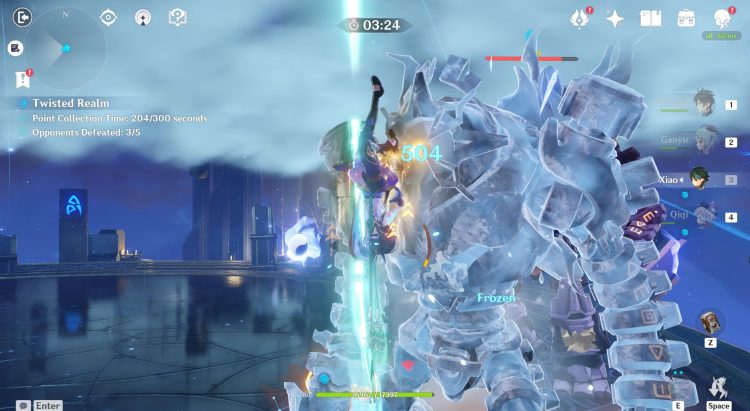