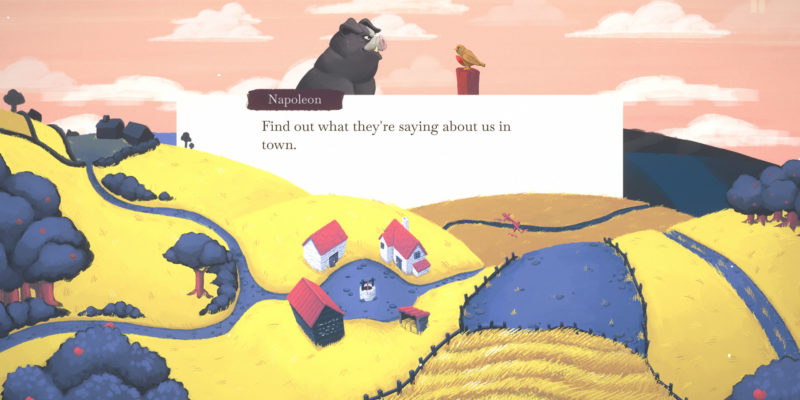 Earlier this year, an Animal Farm game was announced by developers Nerial and The Dairy Men. Now, it has been announced that you can get your hands on the highly anticipated game on December 10. Following the announcement, a short trailer was released, setting the scene for the upcoming title.

Based on George Orwell’s novella, Animal Farm will allow you to be fully in charge of every aspect of the game. His book expresses his criticisms of communism in Soviet Russia and the consequences of abusing power. However, it is cleverly done in the context of farm animals. Over the course of the game, players will get to experience a unique perspective. You will be in charge of corrupting the farm and the animals within it. Examples include choosing laws, directing propaganda and much more. As always, your actions will have consequences, so be careful when tempting the fate of your farm.

Perhaps, with the current social and political climate, it can be considered as good timing for the release of the game. The description of the game on Steam states that players will feel a sense of familiarity as some characters and situations will contribute to the context of 2020. Although, the game has a classic, animated look that appears to be from the thirties. If you have read the book, you will encounter some familiar characters within the game, such as Boxer the horse. In the story, you are able to build and alliance with a number of the animals to help progress your farm.

Take control of your own Animal Farm

Animal Farm will be available to download on Steam on December 10. It will be interesting to see how the developers bring this quite complex and controversial subject to life. Prepare to gather your comrades and solidify your role as a corrupt leader! Remember, “all animals are equal, but some are more equal than others.”