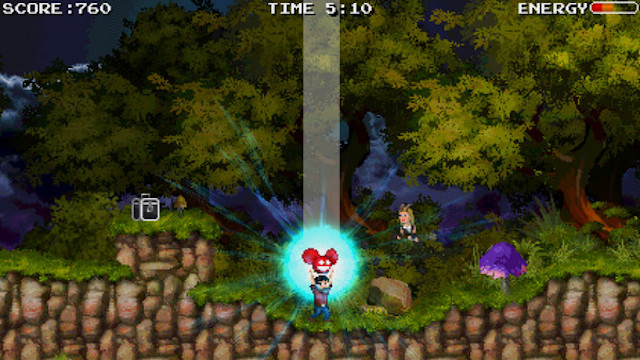 For those of you looking for a retro fix on PC — but with a contemporary twist — then Dr. Kucho! Games has something for you. The company recently announced that it will debut its side-scrolling platformer Ghosts’n DJs next month on Steam. Think Ghosts ‘n Goblins-style of gameplay, but with some DJ influence thrown in for good measure. Oh, and did we mention Deadmau5 is in it?

Wait, a platformer with Deadmau5?

The game takes place in a “parallel universe,” but things are not too bright. The “music scene has been dominated by fake artists and DJ’s” looking to make a name for themselves. This is due to the help of “ghost producers” and a “dangerous power brought from the Pit of Averno” fueling their might.

Created by music legend Dr. Kucho!, Ghosts’n DJs asks players to suit up as one of several different heroes (including Deadmau5) as they battle against the evil forces. Along with a number of dangerous human creatures, they’ll also take on deadly bosses. These include the likes of Devil Goata, Paul Douchebag, Paris Sheraton, Steve Karaoki, and Pete Bullshit.

The trailer below provides a good idea of what the game is all about. It definitely has that Ghosts ‘n Goblins design behind it, but with gameplay that takes its own path. And it also hosts a soundtrack featuring exclusive songs from Deadmau5, all retro-fitted for a title such as this.

Ghosts’n DJs will make its debut on Steam starting February 6. Those who wish to learn more about the game can watch the trailer and wishlist it now. But don’t worry about paying anything, as it will be available free of charge. Now that’s music to our ears.

With that, we can’t help but wonder what kind of life Pete Bullshit leads. Like, does he wake up with terrible ideas in mind? Do they come to him? Hmmm.