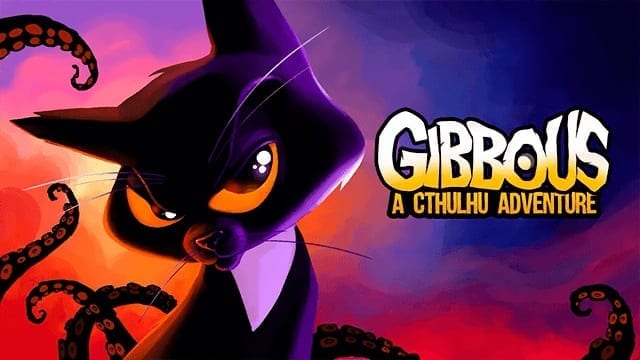 Point-and-click adventures are often the realm of silly yet elaborate stories. Going back to the best games of the genre, the LucasArts adventures, silliness reigns supreme. Maniac Mansion and Day of the Tentacle are prime examples, as is the Monkey Island series. Gibbous – A Cthulhu Adventure seems to draw from that comedic yet puzzling style of storytelling. Add some cosmic horror themes inspired by H.P. Lovecraft, and it sounds like a really unique title. If that sounds like your cup of tea, the game is out today on Steam and GOG.

The game starts with librarian Buzz Kerwan stumbling upon the Necronomicon, which turns his cat Kitteh into a talking abomination. Kitteh is not happy about that. Buzz teams up with Detective Don R. Ketype, and the three of them set off to uncover the mysteries and conspiracies of creepy Cthulhu cults. It looks like you’ll be able to play as both Buzz Kerwan and Don R. Ketype once they meet.

What stands out from the trailer below is how gorgeous the art style is. According to the developers, the entire game is lovingly hand-painted and traditionally animated. It reminds me a lot of Day of the Tentacle and also The Curse of Monkey Island. These games had more of a cartoon animation style than the pixel art of the original Maniac Mansion and The Secret of Monkey Island. Gibbous – A Cthulhu Adventure also features over 70 fully voiced characters with a lot of crazy quirks.

To be fair, I’ve always thought the Cthulhu mythos was a bit silly. One of the best games inspired by the mythos, Cthulhu Saves the World, actually channels that silliness very well. Gibbous – A Cthulhu Adventure doesn’t quite go that far, based on the trailer. It seems to show more of a half-serious quest for the mysteries of Cthulhu’s awakening. Still, you could say there’s something mundane and silly about that. And the detective’s name, Don R. Ketype, is silly (and funny) too. What made the LucasArts adventures great was they knew how to channel silliness in an entertaining way like this.

According to Liviu Boar, Creative Director at Stuck In Attic, “Gibbous” refers to an experiment of mad-scientist proportions that smashes the Cthulhu mythos and drops it into the world of adventure gaming. The game features that cartoonish aesthetic purposefully while still aiming to retain creepy vibes. Stuck In Attic is actually based in Transylvania, so the game is partly inspired by it. There’s a local flavor to its Lovecraftian horror, except “without the associated prejudices.” So if you were expecting Dracula to make a cameo, you might be disappointed.

What do you think of Gibbous – A Cthulhu Adventure? A bit too silly for your taste, or a fun classic point-and-click adventure? Leave your comments below and tell us what you think!

Heroes of the Storm has a new Nexus Hero called Qhira

Call of Duty: Modern Warfare will have dedicated server support