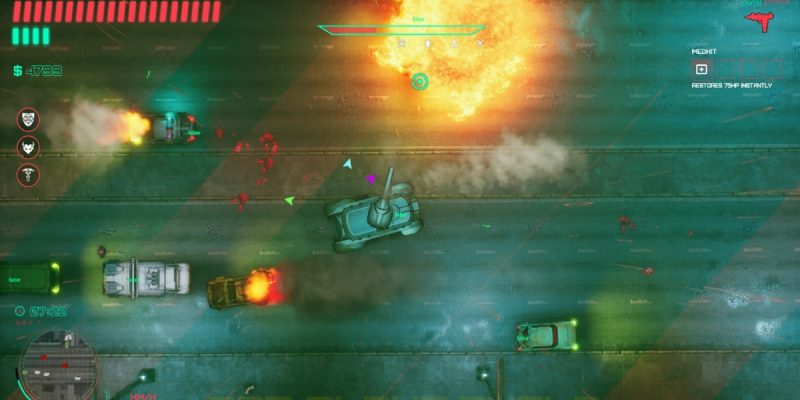 Grand Theft Auto has long stood tall as one of the most popular open-world series in gaming history. However, it’s easy to forget that before Grand Theft Auto transitioned into a fully 3D open-world game, it displayed its action from a top-down perspective. Those who prefer the gameplay style of the earlier Grand Theft Auto games don’t have to wait long to scratch that itch. Glitchpunk, a top-down action game inspired by classic Grand Theft Auto, has an Early Access release date scheduled for August 11. A new trailer for the game came out alongside this news.

The trailer shows off high-octane car rides and gunfights set in a grungy, dystopian city. Although the zoomed-out camera makes the finer details difficult to identify, the game features 2D sprites set in a 3D environment. Glitchpunk will feature varying wanted levels and an in-game radio much like the typical Grand Theft Auto game.

According to the Steam page, Glitchpunk sees players controlling an android that can “go against [its] programming” through a unique ability known as “glitch.” This android aims to “destabilize the tyrannical governments of the post-nuclear world,” and players can choose how the android goes about completing this goal. Players make their way across four distinct cities that include “the desert remains of the USA [and] cyberpunk Soviet Russia in a post-nuclear winter.” As players progress through the story, they will encounter “themes like transhumanism, xenophobia[,] and religion as well as an all too human story about relationship, self-discovery[,] and betrayal.”

Both the world and gameplay of Glitchpunk seem to have a great deal of promise, and with the release date fast approaching, those interested can soon find out what developer Dark Lord has cooked up so far. Players can find the game exclusively on Steam Early Access. Be sure to check out the release date announcement below, and get a load of those clean visuals.

NieR: Automata is finally getting a decent patch on Steam plus new features

By Sam Robins8 mins ago
Hardware