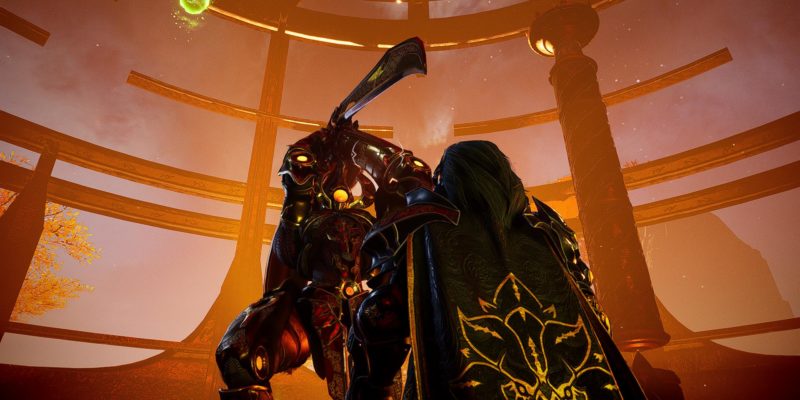 Godfall doesn’t have a ton of crafting, but it’ll save you some time to look at this quick overview of what your options are. For starters, there are 12 Valorplates currently in the game, and 11 of them will need to be crafted (even if one of them is extremely cheap and given to you early on.) Crafting a Valorplate requires two things: five Valorplate cores and 50 of a crafting resource from motherlodes. Valorplate cores can be found in the game’s zones. Go into your heightened sense mode and look for glowing golden spots. If you find one above what looks like a corpse, that will grant you a core.

As for the crafting resources, there are three of these in Godfall that are specific to the Earth, Water, and Air zones. These are Infused Jasper in Earth, Crystalline Tears in Water, and Aetheric Filaments in Air. Motherlodes are all over the zones and will often give you four-to-six of the zone’s respective material each. Once you have all the cores and materials, just walk over to the Valorplate you want in the Sanctum, select “craft” and then equip the plate. It couldn’t be simpler.

With upgrades, you’ll need to have found Zelnum first in Godfall before receiving access to the upgrade apparatus located opposite Seventh Sanctum. Once he’s there, just walk up and interact with this and it’ll take you to a screen with all of your loot broken up into categories. Weapon upgrades focus on increasing DPS, while gear upgrades improve stat boosts. 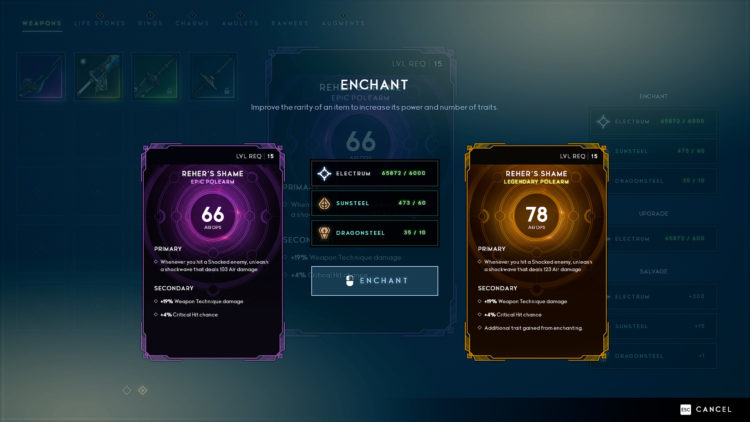 Each piece of gear in Godfall has five upgrade levels. When you upgrade a weapon, its DPS increases by four. Required upgrade amounts depend on the rarity level of the item. The main resource you’ll utilize for any upgrades is Electrum, which you’ll find constantly. The second most-used resource is Sunsteel, which you’ll get for salvaging unneeded equipment that’s at least uncommon, and can be found in floating green spheres out in the zones. Then there’s Dragonsteel, which is much rarer. You can only get this by salvaging items of epic rarity or greater. Finally, there’s Incarnate Essence, which will only drop from midbosses and elites.

As you’d expect, each upgrade level in Godfall has higher and higher resource requirements. But these still won’t be quite as expensive as enchanting your gear. Enchanting increases the rarity of a piece of gear and improves the DPS more than simply upgrading will do. But it also adds additional boons to a piece of equipment. A green rarity item, for instance, only has a single boon, while a blue one has two. If you have a favorite weapon type and haven’t gotten any good drops lately, it can be worth enchanting a better one. But it’s quite pricey. Doing so costs thousands of electrum and a hefty amount of Dragonsteel. For instance, upgrading from a purple weapon to a gold one will take ten Dragonsteel, which would require you to salvage four other epic items to attain.

That’s all there is to crafting and upgrading in Godfall. It’s not particularly complicated and, due to how often you level up and find new stuff, it isn’t all that necessary either. Just keep farming and you’ll have plenty of resources regardless.

The newest Plague Inc. DLC tasks players with beating back a pandemic