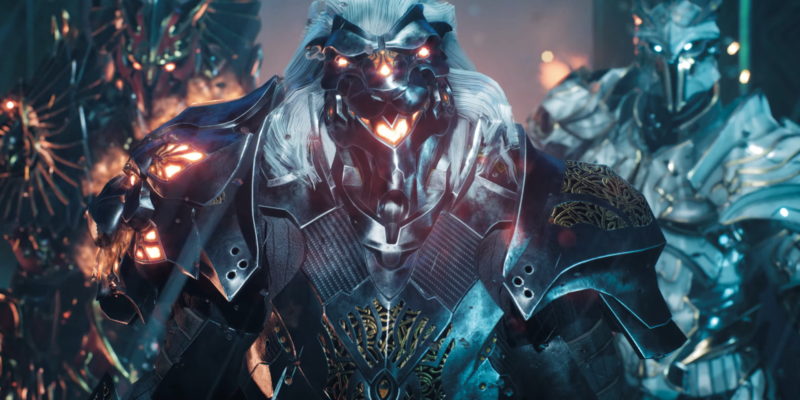 Godfall, the upcoming looter-slasher from Counterplay Games, had gameplay leaked on Reddit today. User u/YeaQuarterDongIng revealed only six seconds of gameplay, but it is enough to give a sense of how the game will look in action. The user goes on to claim that the footage is from early 2019. It’s also only a small part of the trailer he has, so we might see more footage in the future. Take a look at the short clip below.

If you haven’t heard of Godfall, it is an upcoming Epic Games Store and PlayStation 5 title published by Gearbox Software. It’s a third-person action title in the looter vein, hence the phrase “looter-slasher.” The high-fantasy setting has plenty of gigantic pieces of armor and oversized weapons. So if you’re a fan of collecting obscenely large swords, well, there you go. Players will travel to different realms typical of fantasy elemental forces: earth, water, air, fire, and spirit. Godfall is also co-op with up to three players, so you and a couple of buddies can delve into the fantasy world together.

The trailer itself only shows off a brief glimpse of combat. The particle effects in Godfall certainly are pretty, and the environments are beautiful and varied. One enemy type appears to be a gargantuan fighter in gold plate armor that dies with explosions of ethereal blue fire. There are also smaller, lava-like creatures that have flaming weapons. And the effects on those flaming weapons look fantastic. I’d wager they are in the fire realm, which means we are likely to see other units that correspond to their element. I look forward to seeing what the lightning effects look like. And kudos to Counterplay Games; if this trailer is from early 2019, then the game probably looks even better now.

Crisp gameplay, but what about the loot?

Also, the action and animation look smooth. I hate comparisons to Dark Souls, but, well, it looks a bit like Dark Souls. I can comfortably say that the action looks great, but like all looter games, Godfall will live and die on its looting system. We don’t have any glimpse of that here, nor any information about loot besides the fact that you will have a variety of weapons such as swords, spears, etc. Hopefully, Counterplay Games is able to create an interesting loot system that rewards players with meaningful gear. There are plenty of lessons to be learned from big names in the genre that released in 2019, such as Anthem, Borderlands 3, and The Division 2.

Godfall will be an Epic Games Store exclusive on PC and is slated for a late 2020 release.