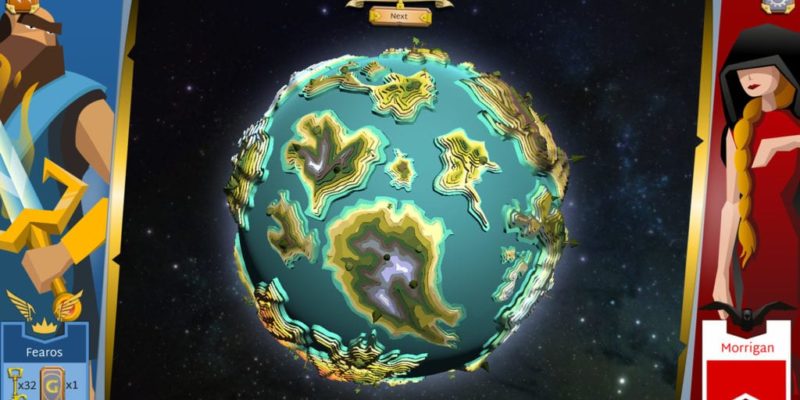 Ah Godus, a game we had hoped to forget about because it spectacularly failed to deliver what was promised. A real shame too, because it would have been great to see Peter Molyneux create another decent god game in the Populous mould. But times have changed, and games (not to mention Molyneux himself) have moved on since the good old days of Populous. In the end, Godus on the PC was a complete disaster for 22Cans.

But just when you thought the title had basically been ditched on the PC, Godus Wars appears out of nowhere. It’s a sort of spin-off from Godus bringing in combat elements that never materialised in the original release. This is effectively Godus at its core, but with the slightly altered focus on conquering segments of land and continents that make up the game world.

Players select a deity and are then thrust into what is supposed to be a Real-Time Strategy game. The idea is to clear land, let your settlement grow and gain more followers. The more followers you have, the more belief is generated to expand a citadel, which in turn can create units to attack the opposing force on the island.

This all sounds well and good, but you don’t really do anything to make this happen apart from the odd click. At the start of each game there’s a few settlers which automatically go off and create dwellings. The more clear land you have, the more the settlers will reproduce to create more dwellings. The more dwellings and settlers you have the faster belief is generated. You really have to do very little for any of this to happen automatically. If you are really bored you can still click around and gather belief from trees and rocks but even that gets annoying fast. 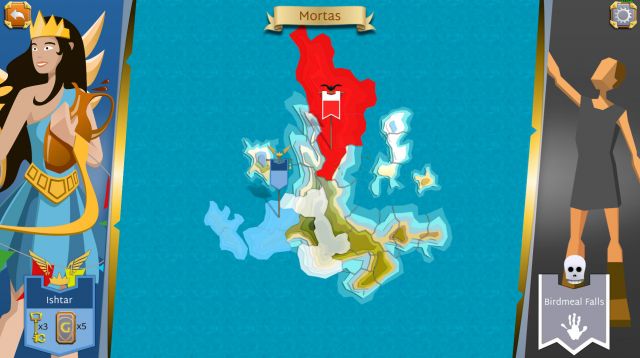 Belief is pink, and stored in a weird looking silo. The idea is to keep the pink tower full to expand your citadel and build soldiers which are then moved into battle to capture the opposition’s belief tower. This in itself is not a bad idea (it’s a pretty straightforward strategic goal), but the process of making that happen is incredibly dull.

There’s so little interaction with the game. The only thing you really need to do is flatten the land (as you did in Godus), which is still a pain in the backside thanks to the annoying terrain dragging mechanic. Once the land is flat the settlers do everything themselves, you just sit and watch, twiddling your thumbs. Land flattening was part of Populous as well, but that game gave you plenty more to keep an eye on.

Once enough belief is collected, you get the chance to actually do something. Clicking the citadel icon in the bottom left of the screen merges the small dwellings together into (unsurprisingly) a citadel, which can be continually expanded as the belief grows. Once the citadel is up you can build troops of little men.

Once troops are available it’s a simple case of watching them pop out, and then moving them towards the enemy across the terrain. The pathfinding here is not exactly great. For some reason, the troops move in the oddest directions as they try to traverse the stepped landscape. Perhaps 22Cans expect you to flatten the terrain to make it easier for them, but sculpting the landscape is so fiddly its probably not worth the effort. The AI is also particularly stupid and often just stands there while your little men attack their buildings. 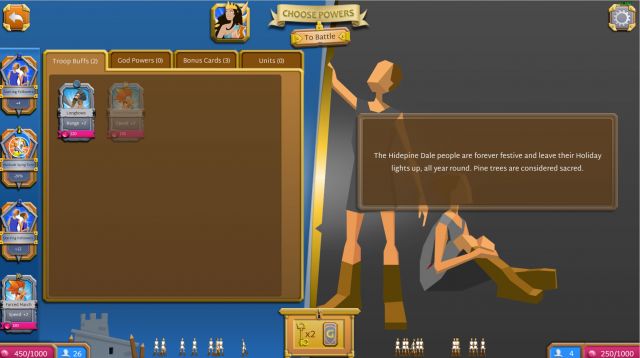 Godus Wars is supposed to be some kind of RTS, but it’s incredibly lacking. The only strategic element of the game are the cards that can be selected as buffs (above), but even then that feels like a cheap way of changing the game rules. There is also a spinning tombola thing at the start of each mission which does throw in a random condition that may or may not aid you in battle, but, again, it feels like a forced method of trying to add a strategic element where the central mechanics can’t provide one.

After playing for a while it becomes apparent that 22Cans have created a game that is so basic and void of any strategy it’s a complete bore to play. Sure, it’s in Early Access, but it’s so bare boned it’s debatable whether it was ready for even this step. 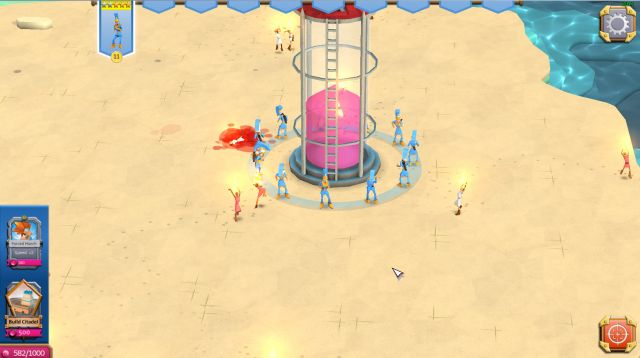 At this stage, it looks like 22Cans should have just chalked Godus up as a big mistake and moved on. Trying to fix something that is so fundamentally broken could make the situation even worse. Let’s not forget it’s taking time and money to keep Godus going. I understand they want to do the right thing for the PC gaming audience (Godus Wars is a being charged for, but it’s a freebie if you own the original) but I think most PC gamers would rather just forget about it.

If you had the slightest urge to actually buy Godus Wars, then think again. Wait and see if 22Cans can make a game of this before taking the plunge. This is a game that will (still) need a lot more work if it’s ever going to feel like an actual, completed title.

Ubisoft denies The Division on PC is held back by consoles

By Steven Wong3 days ago
News

By Kevin Carignan4 days ago
Previews