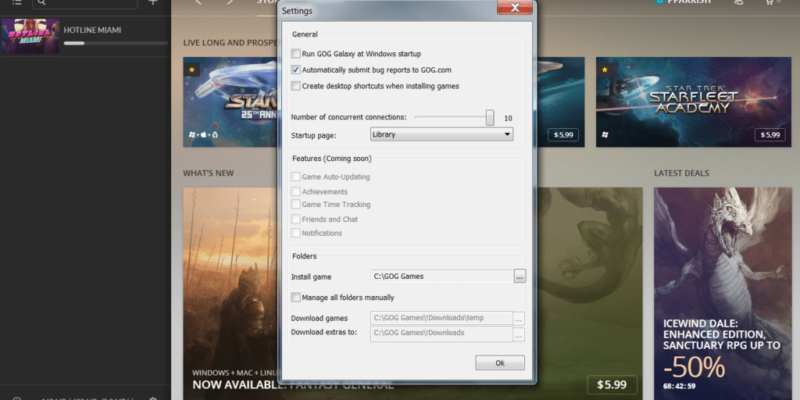 “Hooray, another third-party store and download client for my PC games!” is a sentence never uttered by anyone, anywhere. Steam is the one we put up with. Ubiquitous and all-encompassing, looming over everything on a marketplace made of hats.

Over there we have Ubisoft’s Uplay, infamous for erasing cloud saves on a whim and unable to perform basic functions like uninstalling alpha versions of games (Rainbow Six: Siege, I’m looking at you … because I can’t remove you.) Meanwhile, EA’s Origin performs a tolerable service (with a half-decent refund policy,) but still feels a little like a jealous King guarding his FIFA-shaped gold from the rest of the realm.

But if anybody is going to do one of these in an inoffensive, customer-cheering way, it’s likely to be GOG.

A super exciting settings image showing the current set of options, plus those that are “coming soon.”

The GOG Galaxy beta is pretty light on features, but that’s okay because this particular download client is just as notable for what it allows you not to do. For a start, you don’t even have to use it. GOG is going to maintain the current system of DRM-free site downloads, so if you’re ideologically opposed to these clients in general you can skip it entirely.

Today’s Witcher 3 pre-load, for example, is available through GOG Galaxy, or in 4GB chunks from the GOG site. A nice change from the norm, where companies force you to use their new, shiny gadget because it’s new and shiny (even if it’s actually worse, or you don’t like it.)

As already noted, this beta version of GOG Galaxy has yet to implement quite a few of the (optional) features like friends lists and the ability to chat with them. One which sounds particularly interesting is the option that will allow players to roll back to a prior patch, perhaps in circumstances where an update has managed to break something or reduce performance.

This carries some attendant questions, such as whether this option will be available for all games or just those GOG/CD Projekt Red tie-ins like The Witcher 3. It’ll also be interesting to see what happens with games that have an online component (which usually demand the latest patch no matter what). None of these things are arguments against the idea as such, just aspects that aren’t yet clear.

If you fancy installing patches at your own pace, you can disable auto-updates.

Of the options which do presently exist in the GOG Galaxy settings menu, my favourite is the ‘Startup page’ selection. Unlike so many other clients that dump you automatically to the store screen (because of course, you want to buy things every time!,) here you can load in to your game library by default. That’s a simple, but very welcome, choice.

The same settings box also provides the expected options to alter your default installation folder, toggle whether GOG Galaxy loads as part of Windows’ start up process, and a slider for concurrent connections (one to ten.)

To test out the download speeds, I grabbed Hotline Miami and Mount & Blade on different days. The Miami download was fairly slow (0.9MB/s,) but with Mount & Blade I was getting speeds comparative to those on Steam (between 2.5MB/s and 3.0MB/s). Honestly, I think I just had a spotty connection on the day I was testing Hotline Miami. The Witcher 3 pre-load (for those who are able to do that) will provide a more meaningful, wide-scale stress test, I’m sure.

There’s no way to pause downloads at the moment (at least that I could find,) which feels like a bit of an oversight. Hopefully that option is coming in a future release. If you quit out of GOG Galaxy and return, the download does just resume from where you left off, so a manual pause toggle in the client itself should be possible.

Not the fastest download speed for Hotline Miami, but I think my own connection was to blame there.

As promised by their feature list, GOG Galaxy works offline without issue. I pulled out my wireless adaptor, and was able to load Hotline Miami in just the same manner as when connected.

Things like achievements are promised at a later date (if those matter to you,) but as with a few other things it’s not totally clear whether games (like Hotline Miami) will just be importing their Steam achievements or receiving special GOG ones.

Though it’s clearly not complete at this point, GOG Galaxy seems pretty consistent with the site’s overall philosophy towards customers. It’s actually quite refreshing to use a bare-bones client that just downloads games to the folder you select and not a whole lot else. The optional nature of the settings (and even the client itself) means people will be able to keep it that way if they wish, or adopt things like chat and auto-updating as desired. It shows basic respect for those who don’t necessarily want some amazing new feature imposed upon them, and means GOG Galaxy will probably be something I wind up using out of preference rather than begrudging acceptance.