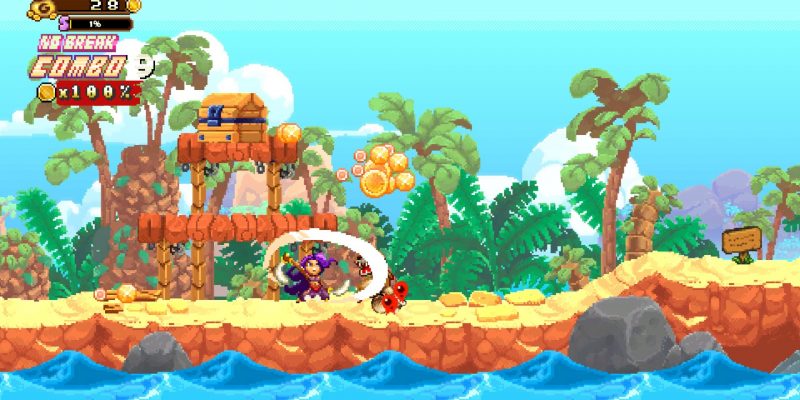 I took one look at Golden Force‘s aesthetic when it was announced last year and decided that I had to play it. Visually, it reminds me of Capcom platformers of the mid-’90s, with lovely, colorful pixel artwork and crunchy, hack-and-slash combat. The game doesn’t quite live up to what my initial hopes were, as it falters due to occasionally shoddy level design, an extremely limited bestiary, slightly stiff controls, and some tedious bosses. But it still mostly delivers on its promise of arcadey side-scroller action.

Golden Force is all about the titular group, which is made up of four heroes. As you’d imagine, there’s not much plot here. The team loves to party and buy lavish things, but their coffers run dry. They set out on an adventure with the hopes of getting enough gold to take it easy for another several months. Along the way, they tear through the forces of the Demon King (yeah, that old trope again) and his generals, who are all named after Mexican food. As a big fan of Mexican food, I approve of this.

The game is broken into four worlds with four main levels each. Each world also has a bonus level that can be unlocked. Your goal in each level is simply to get to the end. The fourth level of each world contains a boss battle. Once you beat all four worlds, you go and fight the Demon King. Golden Force isn’t long at all, lasting from three to four hours, but it’ll take longer if you do the extra stages and try to find every last collectible. Each level has three large coins and a seashell to find too, so there’s some replayability here and there. 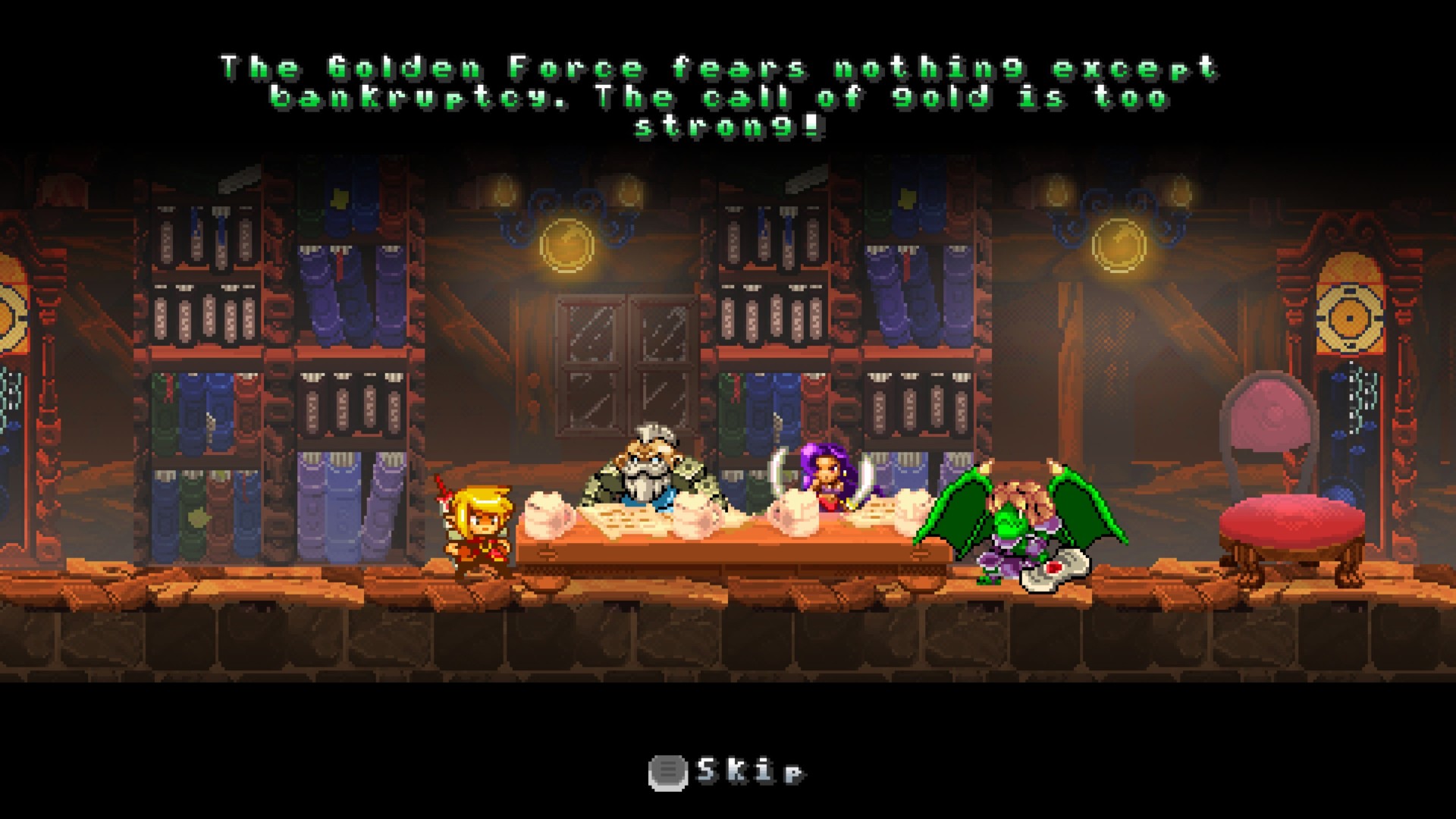 Gathering gold coins is one of your main goals in Golden Force. Enemies drop them on death, plus they can be found in chests, or even floating in the air. At the end of each level, you’re graded on your number of collected coins, how much time it took you, and how many of the collectibles you found. This grade is used to fill up a meter that rewards you with free items and extra gold. There’s a shop where you can spend your gold and collectibles, with the large coins being used to buy extra health. Seashells can be used to extend the number of hits your attack chain has.

All of the characters on your file will share items and bonuses, so you can pick whichever ones you like. Regular gold coins are used to purchase items, such as buffs that add elements like fire or ice to your attacks, or an item that gives you an extra life.  But there’s one thing that puts a major damper on the joy of collecting gold. If you die at any point during a level, all of the gold you accrued is lost. This means that the only way to walk away with everything is to not die, which takes some of the fun out of initial level runs. There’s simply no point in fighting all of the enemies since you might just die due to a cheap section or some instakill spikes. This goes double for boss levels.

That fact often led to me actively avoiding enemies and making a beeline for the exit of some levels, as I knew I’d get killed at some point. That and, as Golden Force progressed, my enthusiasm dipped. I had a blast for the first hour or so, but I feel like the game might be longer than need be. For one, there just aren’t enough enemy types. It doesn’t take long at all to get a bit bored fighting the same few enemies again and again. 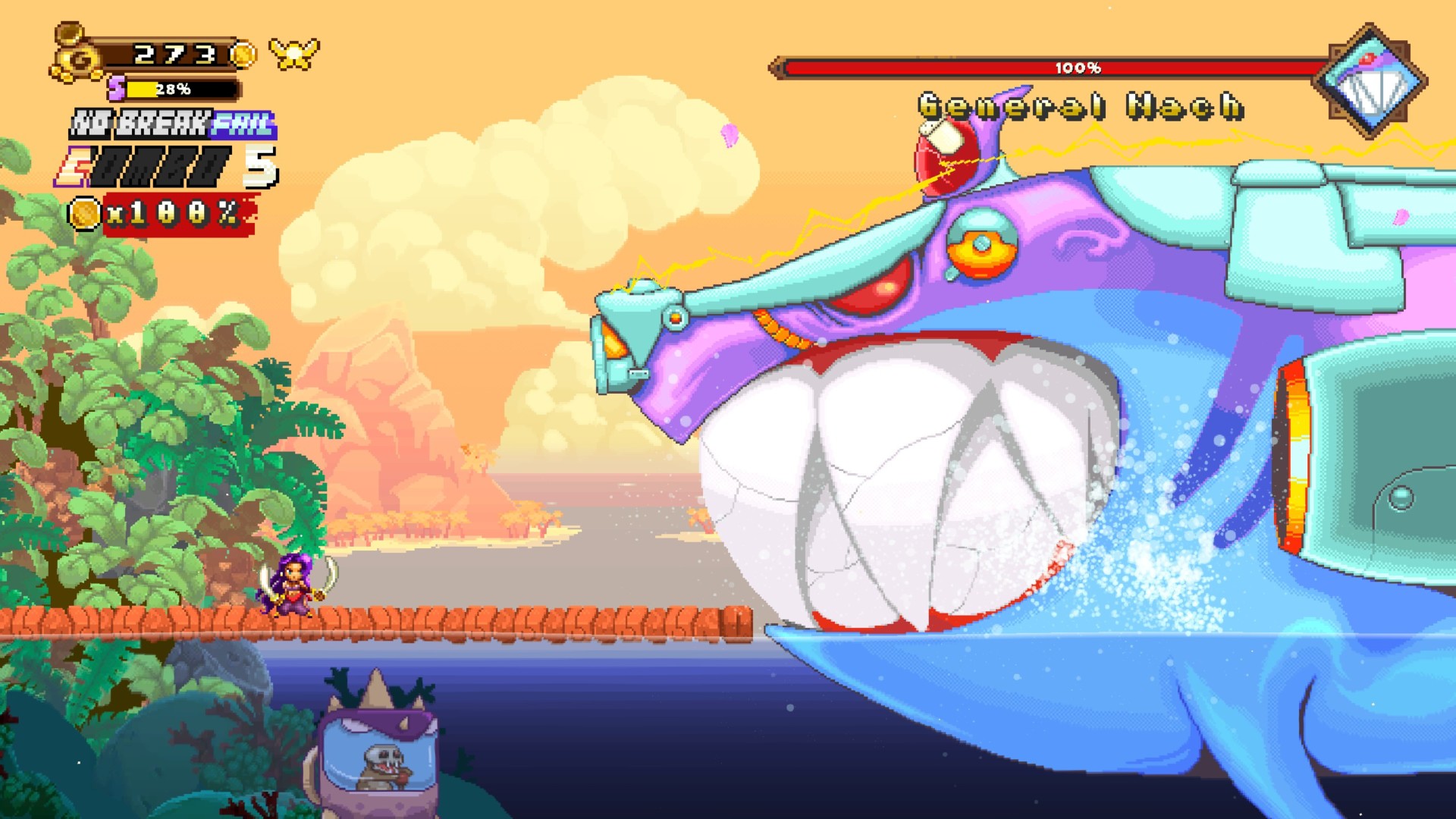 And there are a couple of extra tanky enemies the game loves to trot out. They’re not challenging at all to fight, with obvious movesets and easily avoided attacks. But they take enough hits that they’re just a bore. This is exacerbated when the game starts throwing in awkward “kill everything to progress” sections that don’t feel like they belong.

Dashing through the air

The gameplay in Golden Force is based around hacking foes to bits and platforming. Controls are mostly responsive, save for some rigidity and awkward hitbox details. Each character has melee attacks and a dash that can be used either horizontally or vertically. The way enemies react to taking damage is satisfying, and seeing them explode in a bloody spray of coins upon death is suitably enjoyable. Using proper placement in conjunction with slashing and dashing works well to avoid damage most of the time.

Touching enemies does deplete your character’s life, but if you hit them first, then you can touch them for a time without getting hurt. This window tends to last long enough to dispatch weaker foes. There are also enemies that shoot at you. Some of these shots can be sent back at the foe with a well-timed attack. Characters can charge their melee attacks too. If a fully charged attack makes contact with a smaller foe, they’ll rapidly go flying in the direction you hit them, which is silly and entertaining in equal measure. 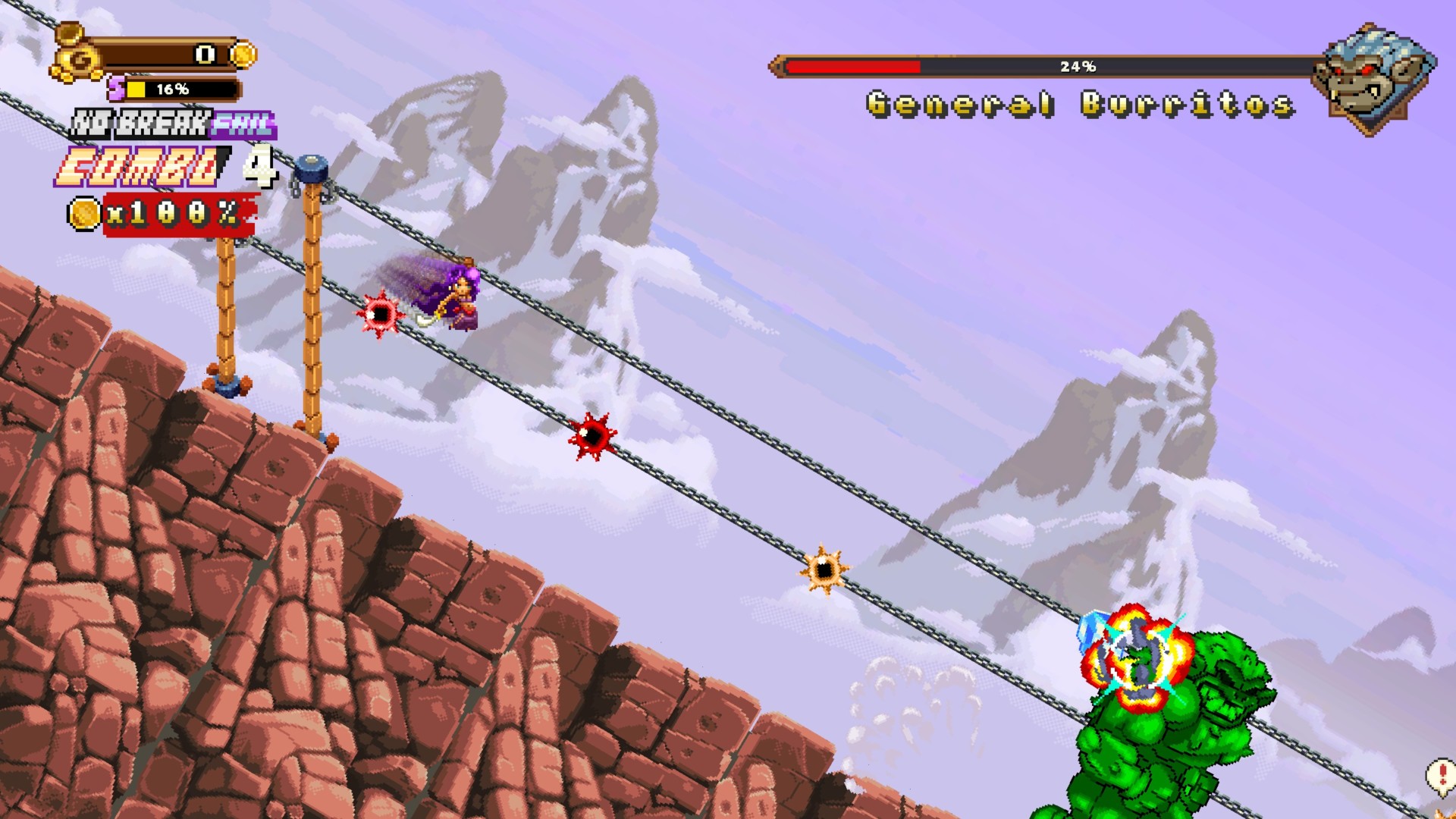 The platforming in Golden Force is similarly solid, although it can feel less responsive than the combat. It doesn’t help that the game is sometimes fond of not letting you see what’s further down, making some navigation enter leap of faith territory. Most of the game’s challenge is fairly even, outside of some difficulty spikes involving the aforementioned “kill ’em all” sections and instakill spikes. The bosses don’t fare as well, however. They’re often overly spongey and can be dull, even if they have impressive sprites. Dodging some attacks can feel a bit luck-based at times too. One such example is the boss of the third level, who is one of the worst offenders aside from the final boss (whose second form totally rips off SotN Dracula), who pushes the tedium to new levels.

Overall, though, I had a good time with Golden Force. It scratches that pixel platformer itch fairly well, even if it goes on a bit too long and can be too tedious for its own good. Fans of these types of games will find it to be enjoyable enough. That is, as long as they don’t mind losing all that gold while they figure out the stages. Golden Force isn’t up there with the classics, but it’s good for a few hours of fun. 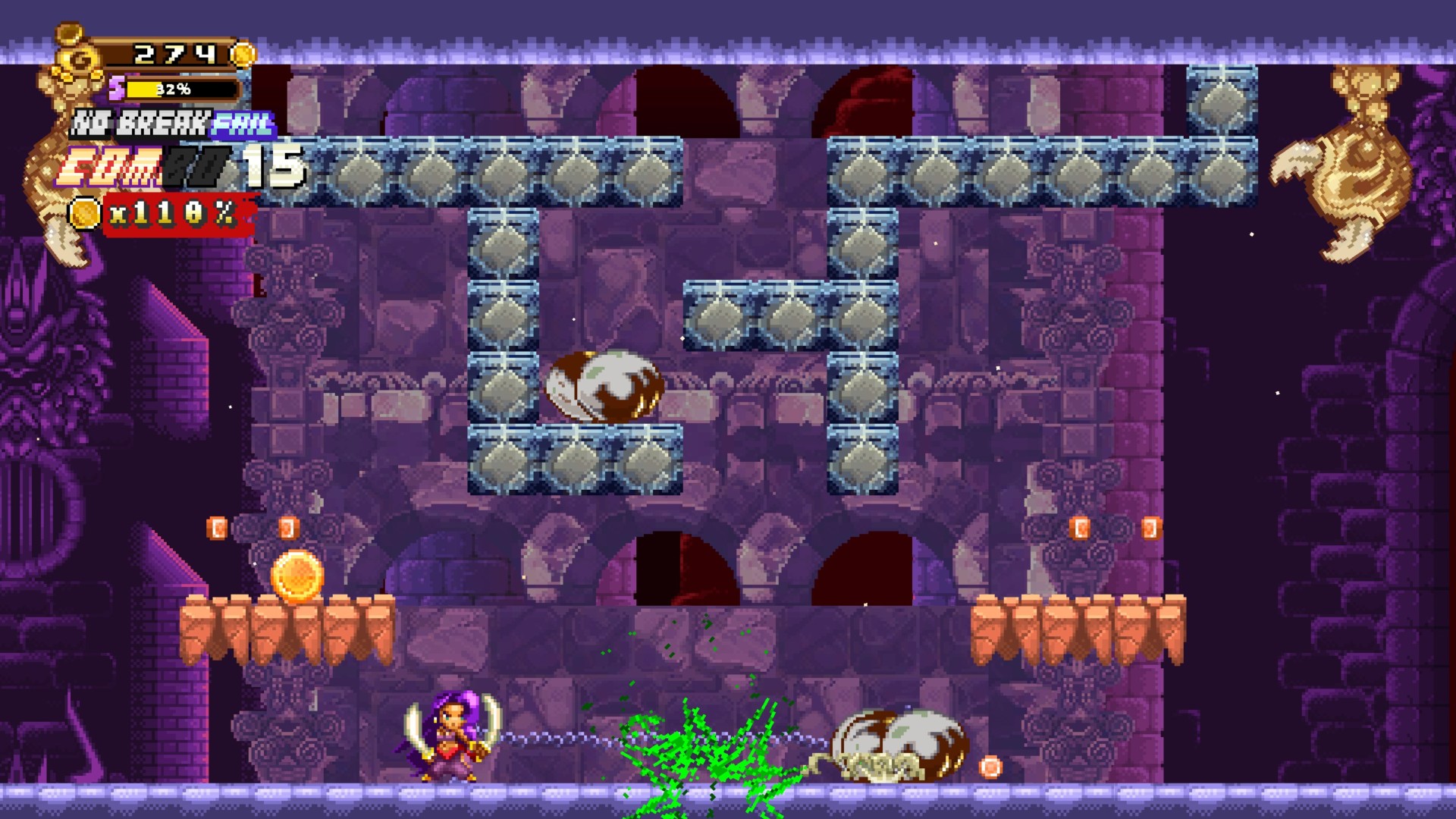 Golden Force doesn't quite have what it takes to be as good as the classics, but it's still a fairly fun time in its own right. It has some issues that make it a bit of an annoyance in some spots, but it still mostly does what it aims to.

We Are The Caretakers Early Access – Is it worth it?

By Blake Grundman17 hours ago
Reviews