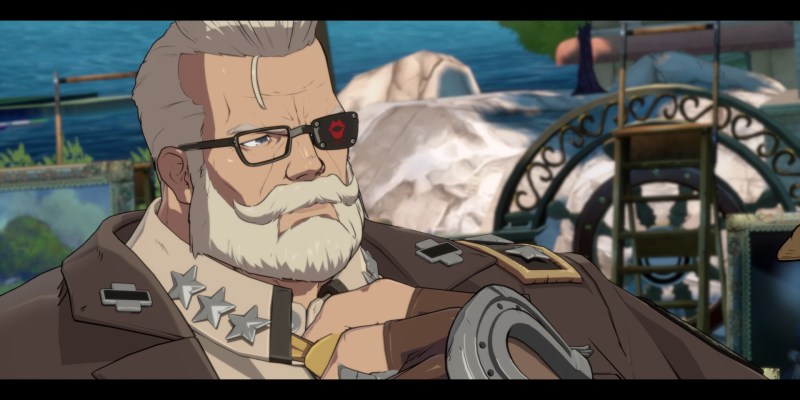 Arc System Works just revealed the identity of the first DLC character for the recently released Guilty Gear Strive, and it’s none other than Goldlewis Dickinson. The “Secretary of Absolute Defense” and (alleged) collector of Cryptids will make his debut in the game next week.

Goldlewis plays a part in the game’s story mode as America’s Secretary of Defense and mostly interacts with series newcomer Giovanna. That being because Giovanna is a member of the Secret Service. Other than that, not much is known about him. Other than his love of jazz and hamburgers. It was also confirmed not that long ago that Goldlewis is indeed the infamous ‘Burger Sheriff’ in the background of the Neo New York Stage in Guilty Gear Xrd.

Goldlewis’ weapon is also probably the most Guilty Gear thing ever. He wields a massive coffin on a chain that contains an alien from Area 51. We didn’t get to see much gameplay in this reveal trailer, but we can see that the alien plays heavily into Goldlewis’ moves. The moveset even includes an attack where he reaches out an arm to smack opponents, or helps his buddy make sure his hair is on point.

The most American man to ever America

The coffin can also transform into other objects, including a Gatling gun that causes a wall break. Goldlewis can also summon a free floating bomb similar to Bedman, which seems amazing for mix-up potential. Speaking of mix-up potential, Goldlewis’ super causes a Hammer of Dawn like laser to fall from the sky. Which is also similar to how Chris Redfield’s level 3 super works in Ultimate Marvel vs. Capcom 3. Being able to purple or blue Roman Cancel this super is going to lead into some powerful mix-ups and I’m all for it.

As part of Guilty Gear Strive‘s first season pass, Goldlewis will arrive next Tuesday on July 27. Two more characters are also planned for 2021. One will appear in August, and the other at an undetermined date. The last two are scheduled for 2022. There are plans for two new stages and new story content to arrive alongside those characters.

Goldlewis’ reveal also lends credence to the datamine that suggested the first DLC characters would be Goldlewis. The others include Happy Chaos, Asuka (aka That Man), Jam, and Jack-O. But that still remains to be seen. Guilty Gear Strive is available now on Steam.