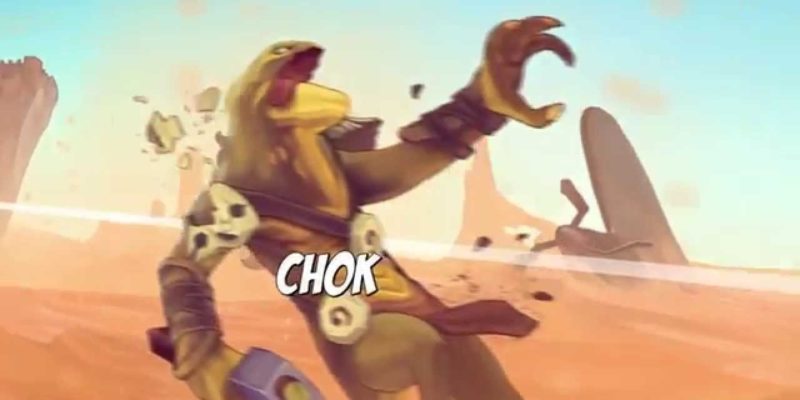 Hostile creatures and a harsh landscape full of beasts surround you. You came here through a portal, but you can’t find your way home. The other survivors around you are also trapped, and like you, know neither how exactly they arrived or how to get back to their disparate worlds. But one thing sets you apart. Only you have the power to build and control goliaths: large robots that can fight and endure in this unforgiving land.

This is the world of Goliath, a forthcoming  action-adventure indie title from developer Whalebox Studio, to be published by Viva Media. The game also features prominent survival and RPG elements, but unlike other survival games, there’s no worrying about fire, food and water. Instead, you collect resources to do what you do best: build robots. You can craft bombs, traps, and other items as well, but the goliaths are the star of the show here, and what was primarily on display in the E3 demo I had the chance to see.

The game takes place in an isometric perspective, with cell-shaded graphics that are both pleasing to the eye and give the game its characteristic cartoonyness. Outside of safe areas, you’ll spend your time switching between your human form, which can collect resources and lay traps, and your goliath form, which is great for combat and mobility. The goliaths themselves are both vehicles that can directly be controlled by your avatar, or they can go into an AI mode and protect you while you scavenge or lay traps for the massive beasts in the wilds. You can jump in and out at the touch of a button, or change your goliath on the fly. If your goliath dies, it’ll set you back some resources, but it shouldn’t take too long to rebuild.

During the demo, three types of goliaths were demonstrated: wood, stone and metal, each of which has different strengths and weaknesses. Put a stone goliath in swampy terrain and it’ll begin to sink, but put it in icy terrain, and it’ll gain an extra layer of ice armour. The wood goliath, meanwhile, can catch fire in hot terrain, but works much better in a bog. Enemies also respond differently to different machines, such as one beast that attacks wood goliaths (because it eats trees) but ignores other types.

While I only saw three types of goliaths, there will be at least two more: a crystal goliath and a “secret” goliath that you’ll have to discover for yourself. Each goliath has different special moves, and each can be customized with dozens of different parts, leading to enormous variation. For example, there are variant parts for the stone goliath that are “explosive”. Crafting the whole explosive set will net you a goliath that brings the boom, but you needn’t make every part explosive to gain a benefit. You can mix and match as you see fit.

The whole game is procedurally generated, taking place on maps called “shards”. The enemy AI is also procedural, changing depending on context. If you’re fighting a beast, your best bet might be to lure another monster into the fight. While both might hate you, in certain cases, they’ll hate each other even more, and you can sit back and watch the show.

Unfortunately, I wasn’t shown much of the story content, but there will be a number of NPCs and quest givers, including more heavily populated regions and cities, with lots of dialogue. Three factions vie for control of the land, and during your play you’ll be able to help one or more sides in a great war. This will also lead to changes in the world, such as the cities of one faction being taken over by the other. You can also build your own fortress and defend it during the wars, as attacks might come at any time.

A few multiplayer options will also be available. Co-op play will let up to four friends join one player’s game game in order to help them complete quests and fight in the faction war. Competitive play, on the other hand, will allow players to bring their creations into a small arena area to duke it out, robot on robot.

Developer Whalebox Studio hopes to support a mod community that can create all new content, including entirely new goliaths. I’m already looking forward to seeing what mechanized monsters I can create and battle with my friends.

Expect Goliath in first half of 2016.