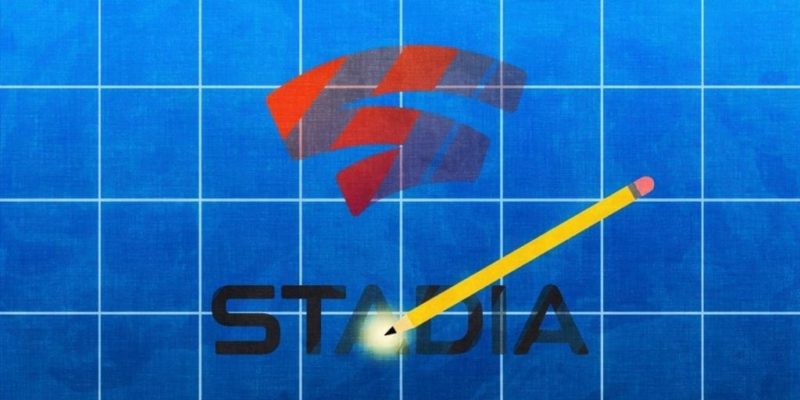 Google has spent the last few weeks hyping its big showcase for GDC 2019. As promised, the company did provide quite a surprise: the reveal of its new Stadia platform. Described as “the future of gaming”, Google spent over an hour preaching to the crowd and viewers why the company considers gaming in its current form to be primitive: because it’s all tied to boxes. As far as Google is concerned, this is a big roadblock that we need to remove. And game streaming is the prime way to do so.

We’ve seen game streaming services come about before. However, Google wasn’t particularly shy about flexing its monetary muscles, which exceed most of the other companies that have occupied this space, like Nvidia. Google emphasized how it has a global fiber-optic network array in place that “nobody else has”. This is important, seeing as the biggest hurdle that any streaming service faces is availability. But, rather ironically, in a presentation where the phrase “no barriers” came up quite often, it’s the geographic barrier that politely planted itself in front of me as soon as the show had wrapped up.

Upon trying to access the main Stadia website, it smacked me with a “We’re not available in your country yet” landing page. For context, I’m currently in my home country of the Bahamas. It’s a tiny archipelago, but one that’s extremely close to the USA. In fact, the island I’m currently on is a 30-minute flight from Ft. Lauderdale and Miami, Florida—both being less than 100 miles away. Despite the extreme proximity, and even the fact that the infographic Google used to show its edge node locations had The Bahamas highlighted, Google has already barred me from access to Stadia (for the time being) since it will begin service first in the USA, Canada, and “most of” Europe. There are 200 countries in the world, so this literally means only a handful of people will have access to Stadia early on.

This is why I cannot yet get truly excited about this service, or any other game-streaming service for that matter. The question always comes back to, “Well, can I actually use this?” 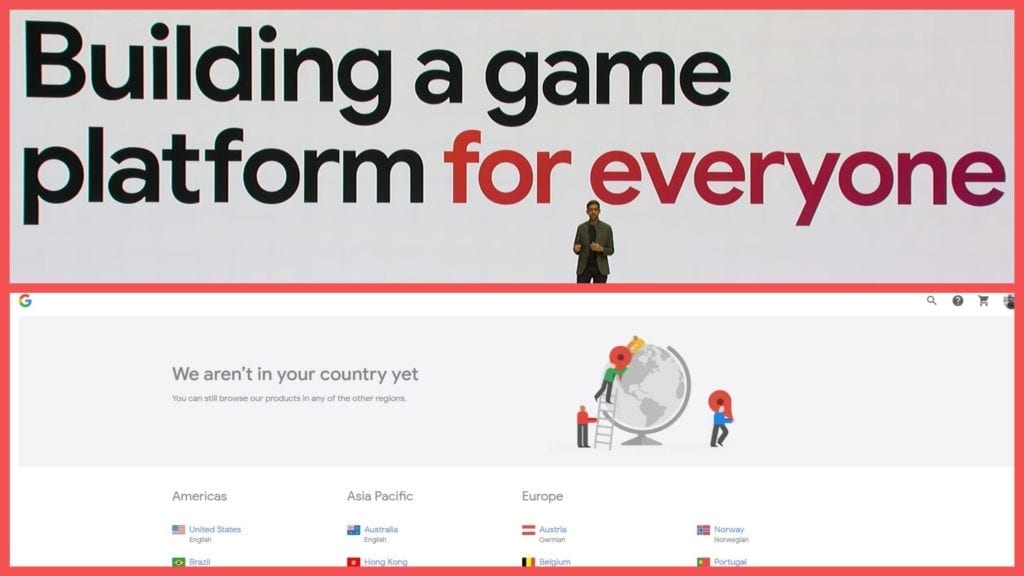 An Open Invitation (That’s Also Closed For Some People)

I’ve written about my thoughts as it relates to game-streaming several times in the past, and Stadia hasn’t really changed my mind. This mostly has to do with the fact that Google spent an hour trying to dazzle everyone’s minds with fancy testimonials and demonstrations, but, as others have pointed out, the company didn’t actually provide a lot of truly important details. Such aspects include pricing, game selection, and what happens to people’s data if they ever cancel their subscription.

Basically, I do believe this service will be extremely convenient, but not necessarily to everyone — not yet. Especially since, in addition to geographic roadblocks, there’s also the tango that people will need to have with their ISPs.

While it wasn’t mentioned in the actual presentation, the question as to how fast of a connection you will need for Stadia was at least addressed in an interview. According to Stadia boss Phil Harrison, Google recommends players have a connection of approximately 25 Mbps in order to handle a 1080p, 60 FPS stream. Stadia will make dynamic adjustments to quality as the connection fluctuates, but that’s the minimum for the full HD streaming. Turns out, I currently have the speed to handle it (100 Mbps over Ethernet), though I’ll still have to deal with that pesky geo-gate. But here’s the thing. My father works for the national cable company here, so I get this service at a discount. That definitely is not the usual case for most people. In fact, on average, the average global Internet connection speed from country-to-country is actually under 20 Mbps.

To give you another real-world example, for the last two years I’ve been traveling around South America. I’ve spent a lot of my time in various AirBNBs; some with great Internet connections and others with woeful ones. That experience taught me just how much imbalance there is in terms of the availability of high-speed Internet service. Even in areas where it is present, some people choose not to use it (usually due to its high cost). There are also still places all over the world (in both developing and established nations) where the high-speed service isn’t an option at all.

This goes back to the point I brought up earlier about Google’s little flex over its network size. Even if it does have servers in key locations around the globe, that doesn’t mean everyone can access them the exact same way. ISPs are still the gatekeepers. Depending on how advanced their infrastructure is and how expensive their service is, they’re the ones that determine who gets to fully enjoy something as resource-hungry as Stadia. And that’s not even mentioning data caps. While I personally have never had to (knowingly) deal with those, it is a valid concern that’s been brought up by those who do live in areas where this is a prevalent issue, such as many people in the USA. 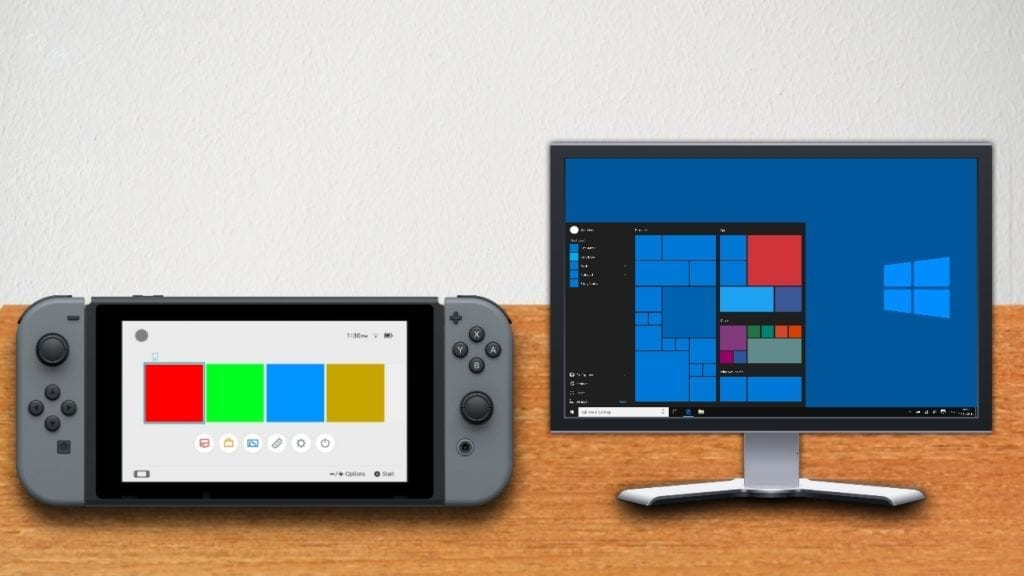 As much as the Stadia team might think the future gaming “is not a box”, none of the hurdles I just brought up are present with traditional platforms. When gaming on a PC or console, players are really only limited by their bank account. As long as you can afford adequate hardware and have enough to buy games every now and again, you’re good. No need to worry about getting through the red tape of geographical gates and ISP headaches. There’s also the added bonus of actually having the game either downloaded on your machine or available on a disc, meaning that (as long as it isn’t online-enabled) you can play at any time.

If someone were to become a streaming-only gamer, however, that means anytime their connection is unavailable or the power goes out (a generator restores power, not cable), their entire gaming library would be inaccessible — yet another “barrier”. And what about if Stadia ever shuts its doors, like the infamous OnLive did? That means your entire library would be wiped out. Meanwhile, even in the case of digital games, as long as the copy of a title you purchased remains intact and the machine you play it on remans operational, you’ll be able to revisit that game even several years after its release.

But, you might be thinking: “You just don’t have the vision! This is the future, whether you like it or not!” Well, perhaps.

However, ‘normies’ like myself aren’t the only ones raising an eyebrow at the big claims Google has made for Stadia. Even Mr. Andrew Sampson is skeptical, and he’s the CEO of Rainway — another in-browser game streaming service similar to Stadia. He took to Twitter to voice his concerns.

As Mr. Sampson mentioned, when his team tested Project Stream (the beta version of Stadia), they found the results to be unimpressive, with quality dropping to 720p and 30 FPS at times. He also has some issues with the controller, mainly due to it being fully reliant on a Wi-Fi connection. That could result in an increase of a chance for latency and “dropped inputs”. He also made a good point by mentioning how, no matter how great Google’s network is, your distance from Google’s edge nodes will determine your experience. These are just some of the points he made, and they’re concerns Google should certainly address sooner rather than later.

This is why I titled this article as Stadia simply being a good idea “on paper”. I will admit that the fluidity of the software as Google showed it (assuming it actually works that well in real-world conditions) truly does impress me. And it has lots of neat features, like the ability to start a game session from a YouTube video, play a specific point from just a link, and being able to pause and resume sessions seamlessly between devices. Indeed, all of that does look very futuristic and intuitive. But I still believe it will be a long time coming before game streaming is as widely adopted as Google and other companies are hoping it will be. 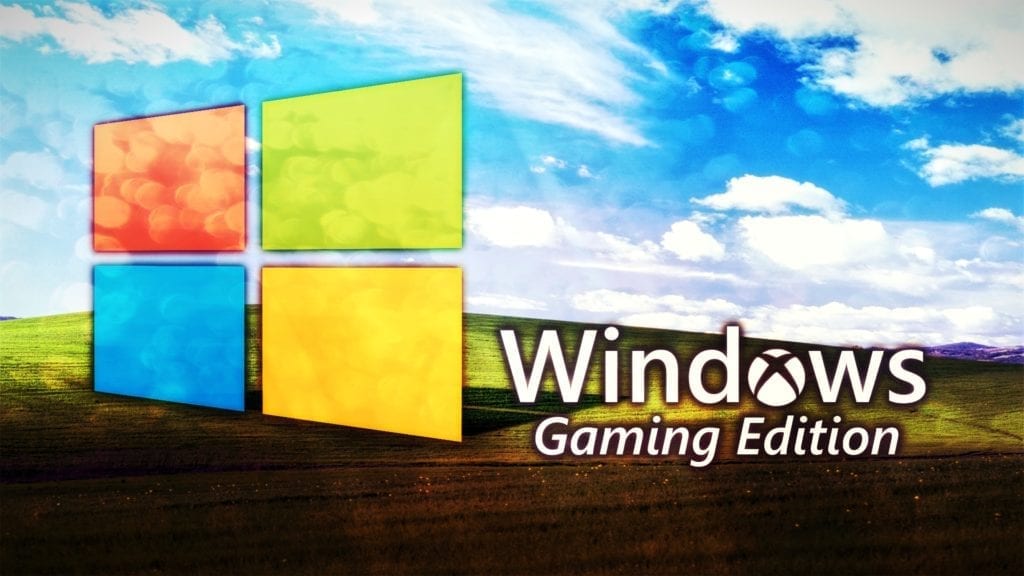 Being Basic May Not Be So Bad

True, PCs and consoles do come with limitations that streaming services don’t have. I just wish Google and its counterparts would stop preaching as if their services are the be all, end all solution. They’re new and different, but not the one saving grace for the entire industry. Perhaps in a decade or so, we’ll all see running games on boxes as totally outdated, but in the current state of technology, they remain quite a viable solution. Music and movies were easy to push into a practically all-digital realm because they’re just made for consumption. Games, however, are interactive, which requires a much more complex environment to work correctly. When the likes of Google, Microsoft, Nvidia, and others formally admit that, only then will they truly impress me.

In the meantime, I am still intrigued to see how Stadia will turn out. Google has clearly put a lot behind it, so it doesn’t (at least for now) seem like one of the many projects the company starts then drops moments later. There’s a lot of moving parts here, and the end result could be the start of something truly great if things work out correctly. But, as far as I’m concerned, this is a spark, not an inferno. Game streaming may very well have its day, but this is only the beginning.

But, Google didn’t give itself much room for error. Rather than using terms like “we hope to…”,  “our intention is…” and “this is the vision we have…”, it instead opted to make bold promises as if everything is set in stone. If it cannot deliver on these promises when Stadia launches later this year, the service will just become another addition to the pile of laughing stocks this industry has already amassed.

Steam Is Getting A New Look For Its Library, Plus An Events Page

By Blake Grundman3 days ago
Tech