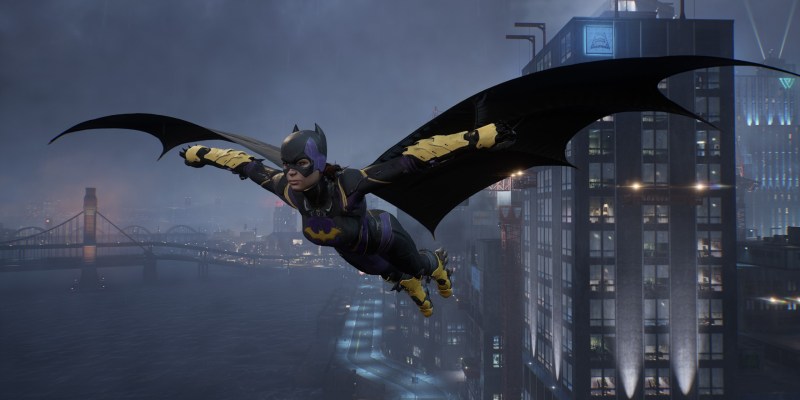 I don’t think it’s fair to compare every subsequent Batman game to Rocksteady’s Arkham series. Not only are those fantastic games, but they’re some of the best licensed games ever made. But Gotham Knights was made by Warner Bros. Montreal, which not only previously developed its own Batman game, but also made DLC for Arkham Knight. Even so, had Gotham Knights tried to do its own thing, it still wouldn’t be completely fair to compare. But Gotham Knights does try to emulate multiple things about the Arkham games, all the while doing nearly everything worse. It’s far from a bad game, but it’s bland, stagnant, and wears out its welcome far before the finish line.

Gotham Knights opens with an immensely entertaining cutscene showing Batman battling Ra’s al Ghul, ending with the two of them brought low by an explosion. Batman’s four proteges, Batgirl, Young Robin, Older Robin, and Murder Robin (Robin, Nightwing, and Red Hood, respectively), swear to understand why things went the way they did all the while doing their best to fill in for their mentor. The story doesn’t stay all that interesting, though, as the writing is spotty and the characterization is weak. The cast seems almost like they’ve been plucked from a mediocre animated show. These are not particularly good versions of the characters.

Their character designs are also aimless, with most of the four reminding me of The Teenage Mutant Ninja Turtles. Nightwing (the blue one) is Leonardo, Batgirl (the purple one) is Donatello, and Red Hood (it’s in his name) is Raphael. I could say that Robin is Mikey because he’s the youngest one, but that’s a bit of a reach. When not in their costumes, their outfits are still color-coded, which made me think of Power Rangers characters. It’s all too silly to take seriously. Barbara wears a partially tucked-in purple and yellow shirt complete with a bat necklace. She looks like a background dancer in an early ’90s hip-hop video. 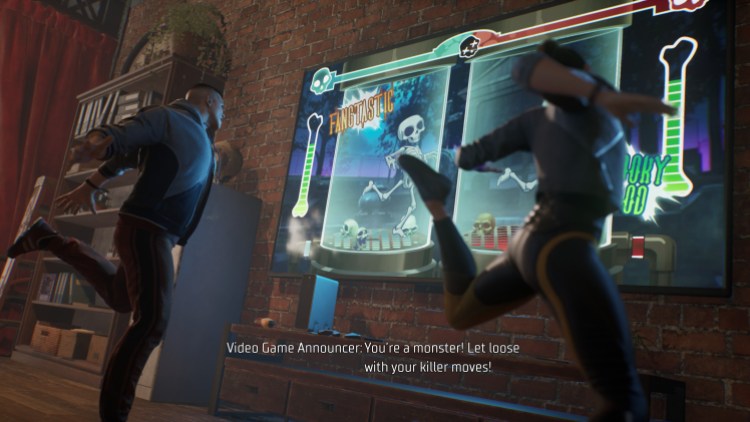 Sadly, the characters’ cartoonish representation is a mirror of Gotham Knights‘ overall art style. The game is colorful, and the textures are detailed, but the city is almost comically bland. Gotham doesn’t look like Gotham; it looks like any other city from any other open-world game, just like the characters look like they could be anybody. The city itself also isn’t memorable, nor is it fun to explore. Navigating in the Arkham games was a blast. Here, I feel like I’m waiting for minutes to get to an icon if I don’t fast travel.

There are some very noticeable Arkham elements in the gameplay. Grappling to higher ground to wait for foes to walk near to perform a stealth takedown is similar, as is the way you sneak. The side stories made up of case files focusing on individual villains is reminiscent of the way Arkham Knight handled them. You even have moments where you have to examine crime scenes to use evidence to come to the correct conclusion. Mixing and matching projectiles with the fisticuffs is much the same. This isn’t just a different Batman game; Rocksteady’s work is embedded in its DNA. 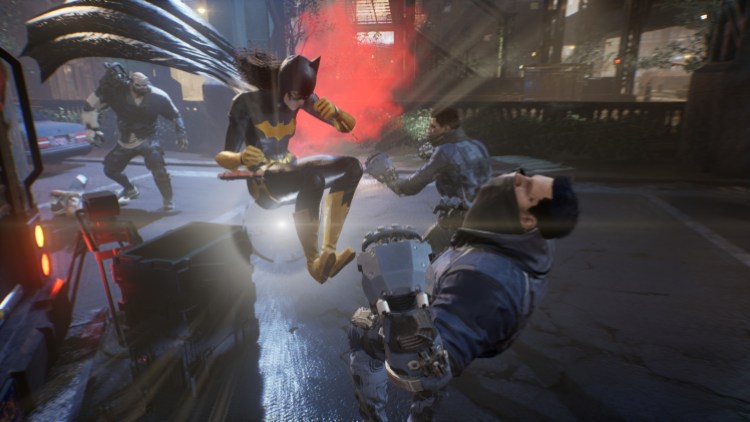 Unfortunately, the combat is easily the worst thing about Gotham Knights. Fighting is slow, unresponsive, and button mashy. You’ll primarily do damage with four- or five-hit melee combos that you repeat ad nauseam, but you’ll constantly have to interrupt them to dodge out of the way. It gives the fighting a specific rhythm of punch, punch, dodge. You can add an extra hit to character combos unlocked by the skill trees, but the fighting feels the same an hour in as it does 15 hours later.

It’s functional, but it’s dull. After about eight hours, I just didn’t want to do it anymore. I found myself sighing and rolling my eyes when I watched characters continue the same stilted combo again and again. Boss battles are even worse, as they can be needlessly tanky to an absurd degree. The stealth is similarly lacking in depth, paling in comparison to even Arkham Asylum.

Getting around also doesn’t feel as smooth or intuitive as it did in Arkham Knight. You still use the grapple to pull yourself to buildings. And characters get different navigation abilities, depending. Batgirl has the same glide as Batman, for instance. Only, it doesn’t feel nearly as good as it used to. Awkwardly chaining jumps at the end of grapples into gliding doesn’t feel nearly as seamless or smooth. It looks and feels like a cheap copy.

Then there’s the bike, which all four characters share. It’s horribly dull to drive and doesn’t feel like it has much weight. Just like the combat, the driving is purely perfunctory. It’s all inoffensive but completely lacking in imagination.

On the other side of the fence, the game’s structure is actually quite compelling. From the group’s headquarters, the Belfry, you can put intel to use to learn about premeditated crimes, cobble together a plan for your next moves, and figure out what to do about any members of the rogue’s gallery. Interacting with the door starts a night shift where you can move about the city freely. 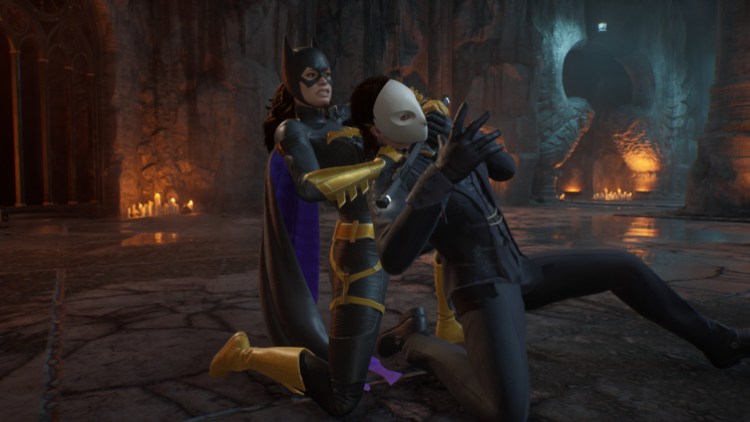 You can stop any number of crimes, both random and premeditated. Premeditated crimes are more in-depth and see you doing things like rescuing people strapped with bombs, or you can break into an enemy stronghold and pick them off one by one. There are quite a few side activities, from collectibles and scanning drones for fast travel locations, to character-centric side stories. When you return to the Belfry, the night ends, and you move to the following day to meet with the others. This is an excellent way to handle a superhero game, and is absolutely the best thing about Gotham Knights.

Most activities earn you experience, which levels up your characters. In a nice touch, all four characters share experience, so you never need to grind them separately. Leveling up grants ability points that can be distributed in Gotham Knights‘ wholly underwhelming skill trees. There are some things that are useful, such as Batgirl being able to avoid detection from security cameras or Red Hood doing extra damage to specific gangs. But a lot of the skills are fluff. Characters will also learn more momentum abilities, which are basically super attacks that you use when you fill up a section of the momentum gauge.

There are multiple gangs, each with their own quirks. But the frequency with which enemies shoot at you or throw Molotovs is tiring, as you not only have to constantly dodge the enemies close by but the others as well. When defeated, enemies drop crafting materials and blueprints. As you level up, your current equipment becomes outdated, and you’ll need to craft new suits, melee weapons, and projectiles. Annoyingly, you can only change your equipment in the Belfry. There are also mods you can slot into gear, which are mostly pointless.

Having to regularly swap out equipment doesn’t work in Gotham Knights. It feels tacked on and unnecessary. One good thing about the suits, though, is that there are many different costume variations, so your characters will look different all the time, which is fun. Many of the costumes are rad too, which helps make up for the character designs. There’s also customization, as you can change the color, cowl, and other suit parts. Aside from the way the city and activities work, outfits and customization are the other best thing about the game. 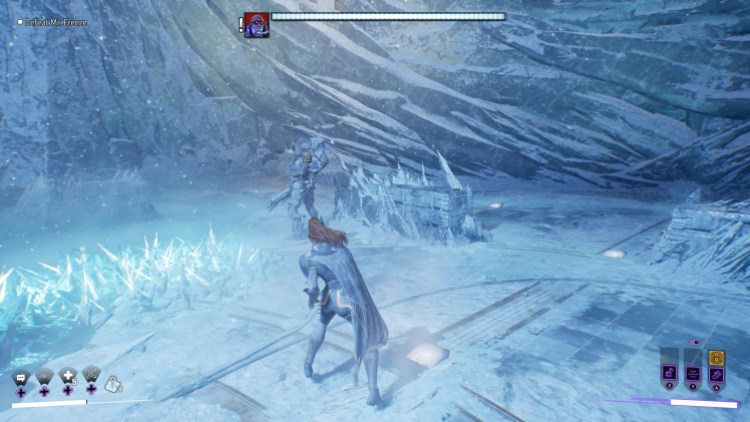 But that simply doesn’t mean much when the core game is so bland and uninteresting. I’m very surprised at how basic and safe so much of Gotham Knights is. It also has a awful PC port with the worst open-world performance I’ve seen in some time. On an RTX 3090 I still saw the framerate dip into the 20s at 1440p. And there are issues with input too, as the left analog stick on controller only registers eight directions, making movement feel sloppy and imprecise. Gotham Knights does a few things quite well, but mostly meanders with everything else. The shoddy port just makes it an even tougher sell.

While fun at first, the simplistic, bland combat and boring navigation makes the game less than it could have been.

The Callisto Protocol is too violent to launch in Japan