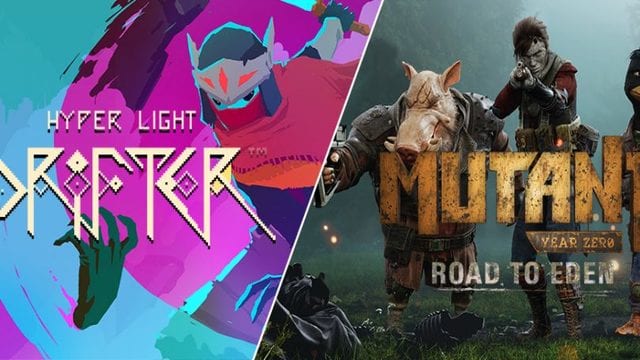 Another week, another giveaway from the Epic Games Store in their great generosity toward indie developers. Last week you could grab a copy of the quirky puzzler GNOG, and the week before that it was noir action-adventure Alan Wake and action fighter For Honor. This week we get two great indie RPGs, Hyper Light Drifter, and Mutant Year Zero: Road to Eden. Hyper Light Drifter was developed by indie studio Heart Machine, and Mutant Year Zero: Road to Eden by The Bearded Ladies. Each of these games specializes in a different type of RPG gameplay, one real-time action, and the other turn-based tactics.

Hyper Light Drifter features some really great pixel art, with a great shader and style. It’s an action RPG in the vein of the great classic 16-bit RPGs from the 90s, but with mechanics that feel more modern. The design of the game is also on a much grander scale. You are a Drifter, haunted by a disease, traveling into the lands of Buried Time to seek a cure. Everything from characters and subtle background elements was hand-animated by the developers. As a Metroidvania game, it’s easy to learn but hard to master. There are numerous vicious enemies to face, and many hazards that will crush your frail body.

Mutant Year Zero: Road to Eden is based on a Swedish tabletop RPG, and it’s more of an old school turn-based CRPG. It takes place in a post-apocalyptic world where animal-human hybrids exist after genetic experiments gone awry. Your squad starts with a boar-man and a duck-man. Along the way, you’ll pick up a lady-snake, a lady-fox, and, in the latest DLC Seed of Evil, a moose-man. The squad is looking for a man called Hammon, and you’ll follow his trail until you find him. Until then, you’ll face robots and other mutants, post-apocalyptic raiders and cannibals, and all that usual stuff.

These are two great games to get for free from the Epic Games Store today. Especially Mutant Year Zero, which released just last year. So make sure you get to the website today and redeem your free copies. It will be available to redeem for a week until the next free game on August 22, classic indie platformer Fez.

Have you picked up your free copies and tried the games yet? Which one is your favorite so far? Real-time or turn-based? Leave your comments below and tell us your opinions!

Galactic Civilizations III is having a free weekend on Steam

Superhot is now funding indies with Superhot Presents, but it’s totally not a publisher