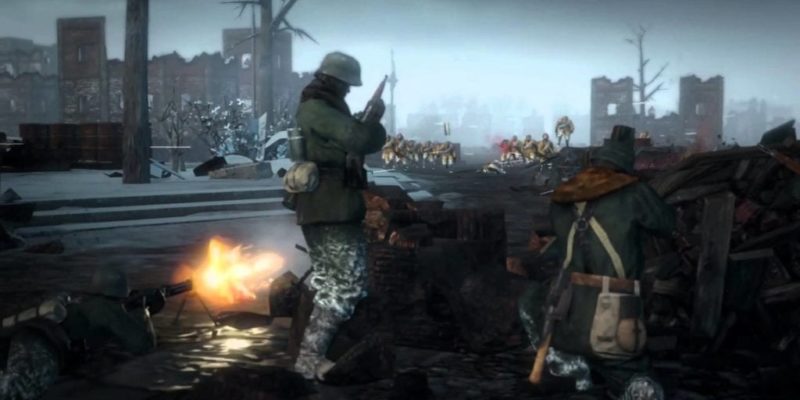 Sniping is a chilly business.

While the Turning Point add-on for Company of Heroes 2 (which includes the map editing tool) will be free, Relic and SEGA are still pumping out some paid-for DLC as well. The next one to arrive will be Victory at Stalingrad, which adds six missions to the Theatre of  War mode: one co-op, two solo challenges and three AI battles.

Co-Op Scenario: Kalach Pincer
70 kilometers west of Stalingrad, Soviet forces must move rapidly to secure key locations and resources about the town of Kalach before mounting the final attack on the vital bridge across the River Don.

Solo Challenge: Bridge Defense
Forced to wait for air units to be ready, the Red Army has had to delay Operation Uranus at the last minute. Irregular and Partisan forces have already moved to secure a key bridge across the Don River and must now hold out against determined German attacks.

AI Battle: Winter Storm
The Wehrmacht has launched Operation Winter Storm in an attempt to relieve their Sixth Army in Stalingrad. Soviet forces must block this attack to prevent the fascists from escaping the city.

AI Battle: Stalingrad Resistance
The Soviets defend the blown out Stalingrad inch by inch, all the while looking to the skies as the German Luftwaffe drops bombs on any target they can find.

AI Battle: Stalingrad Encirclement
Months of bloody close-quarter fighting have led to a decisive turning point for control of Stalingrad. Most of the German 6th Army has been left cut off and surrounded in the city. The Red Army must repulse a breakout attempt by the exhausted German forces.

Victory at Stalingrad will set you back £7.00 GBP, and will be released on 12 November. If you know you want to buy it already, you can pick it up in advance on Steam at 10% off (until 11 November.) The trailer can be seen below.