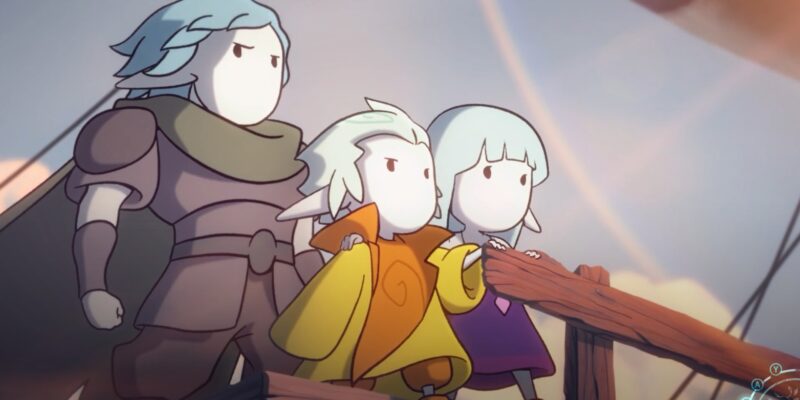 Some ideas aren’t tried often simply because, in the wrong hands, they won’t work at all. “Controlling three characters simultaneously with identical button presses in real-time” is one such idea. To be frank, as an idea, it’s interesting, but kind of terrible. Somehow, Navegante Entertainment has made it work in Greak: Memories of Azur, a game with three distinct characters that must travel and fight together. I won’t say that the execution isn’t without its frustrations or that the game succeeds at everything it tries, but it’s a highly compelling, drop-dead gorgeous game with a lot to offer in the six or so hours it takes to beat.

Greak: Memories of Azur is the tale of the titular land of Azur, home to the Courines. During the events of the game, it is being invaded by a race of beings known as Urlags. The battle isn’t going well for the Courines, and the land has been blighted, making it necessary for them to flee lest they be wiped out of existence by their foes. The story is told through a combination of well-written dialogue and beautifully animated cutscenes. The plot initially focuses on the title character, Greak, as he searches for his siblings Adara and Raydel, so that they can secure their race’s artifacts and escape for greener pastures on an airship.

When the game begins, Greak is separated from the other two and he must regroup with them. He meets up with Adara rather early on, but the two don’t come across Raydel for quite some time. I’m not entirely sure why the game is named after Greak alone, though, as Adara gets nearly as much screen time as him and none of the three main characters are really all that more important than the others. Of course, this is a nitpick. Also, Greak is the worst of the three characters. 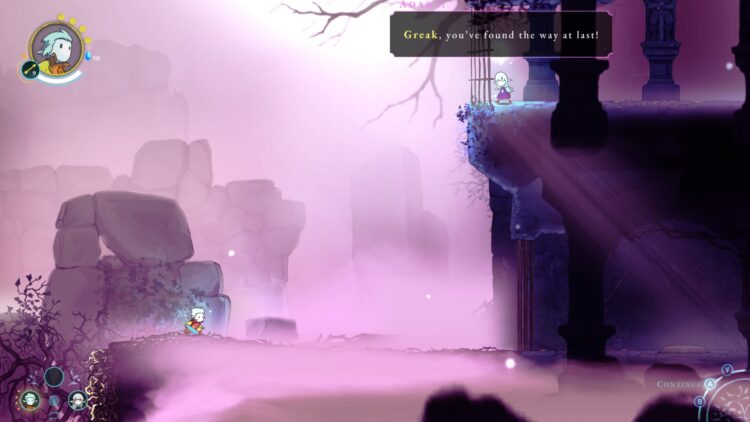 Where am I going?

Greak: Memories of Azur is arguably a Metroid-like, as meeting the other two characters does grant new abilities and different skillsets, but there isn’t much to find via backtracking. That’s not to say there’s nothing, though. Each of the three characters can get an extra hit point from shrines (although I couldn’t find Greak’s,) and there are salable items and new pieces of equipment to find that enhance a character’s abilities. The world is mostly interconnected, though, save for the final section which technically can’t be reached directly. Despite this, there’s no detailed map.

The lack of a detailed map isn’t much of a big deal, as Greak: Memories of Azur‘s game world isn’t all that large, although I would have strongly preferred one so that I could have found more of the game’s hidden items. At one point, I completely forgot how I made it to a specific area and couldn’t find the entrance again. I needed to go back and find an NPC that I ran into before, but I couldn’t remember how to get to them, so I had to wander aimlessly instead. I never found the way there again, so I had to do some creative warping to make it back to them.

There are warp stones and save points to be found around the map. If you die, you go back to your last save. These can occasionally be a bit far from one another, but Greak: Memories of Azur isn’t difficult at all. However, it is lacking in a certain amount of leniency, as Greak and Adara can only take four hits (five if you find their health point shrines). It can be very easy to find a character at death’s door in a blink of an eye. If any of the three loses all of their HP, you get a game over. 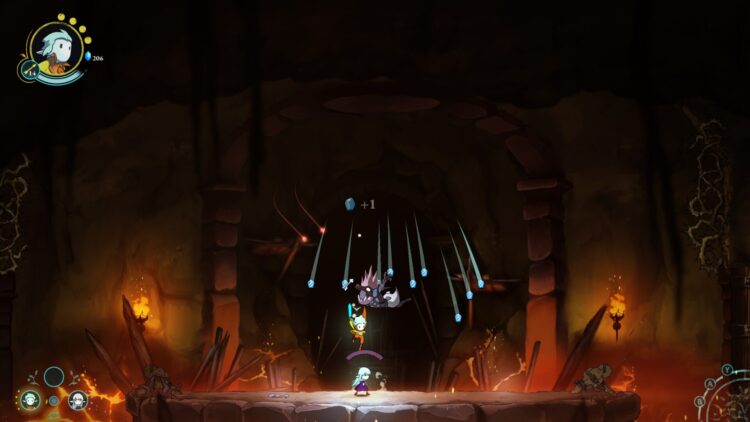 But I wasn’t even in direct control of them!

Before you get used to Greak: Memories of Azur‘s peculiarities, it can be quite frustrating. You’ll come across money, plus plenty of harvestable items that can be eaten to heal. You can also cook them to stack more potent healing items. Having an inventory with sufficient healing items is absolutely necessary. Each character has a certain number of inventory spaces, ranging from three to five. You need to be mindful of what you’re carrying, especially since some story items need to be carried directly within your inventory.

The kicker is that all three characters are completely your responsibility. You can swap to them freely or call them to you. If they fall and get separated from their siblings, you’ll have to swap to them and lead them back. If they get hit while you’re not controlling them, they’ll take damage normally. There will be times where you’ll likely get game overs because one of the characters you’re not controlling took a hit you didn’t see coming. It’s a surprisingly demanding system that gets more manageable once you get a better feel for the mechanics.

Each character has different attacks and abilities at their disposal. Greak fights with a sword and has very little melee range, although he also gets arrows. Raydel has a much wider range and more health, so he’s vastly preferable where melee combat is concerned. The two of them can also double jump. However, Raydel can’t swim, and there’s a fair amount of water in the game, so that complicates matters. Conversely, Adara uses magic that regenerates, and she can hover for a bit. All three can wall-jump. Adara can also hold her breath underwater for a much longer time than Greak, plus you can find an item that lets her swim indefinitely. 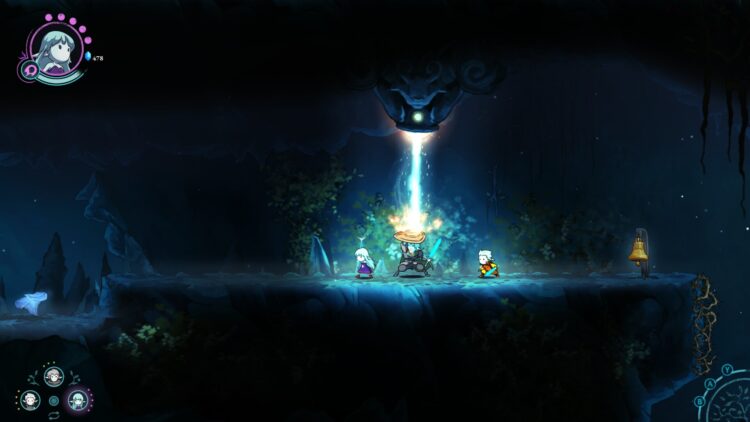 Keeping an eye on the siblings

Raydel’s major ability is a little grappling hook. By the last third of Greak: Memories of Azur, you’ll need to swap between the three characters to solve a variety of puzzles, such as holding down switches and pushing rafts while the others wait atop them. The puzzle design is clever, but never confusing or badly signposted. This culminates in an excellent final dungeon where the three characters are separated and must reconvene while solving puzzles suited to their abilities. It’s pretty great.

As for controlling the characters, holding the left trigger button within range will cause your button presses to control all three at once. They’ll move and jump together, although the other two attack automatically. Due to how different Adara’s hover jump is from Greak and Raydel’s double jump, it’s strongly advised that you do not jump around dangerous sections with all three of them. It’s doable, but it’s better to just move them one at a time.

The game is fairly short, but it felt like it was long enough. It took me about six hours, and it would have taken less with a map, but I greatly enjoyed much of my time with it. The combat is simplistic, and there’s not much to see off the beaten path, but the compelling three-character system, interesting narrative, and truly terrific hand-drawn visuals are among the best I’ve seen in some time. These elements combine to make Greak: Memories of Azur a game well worth the price of admission. 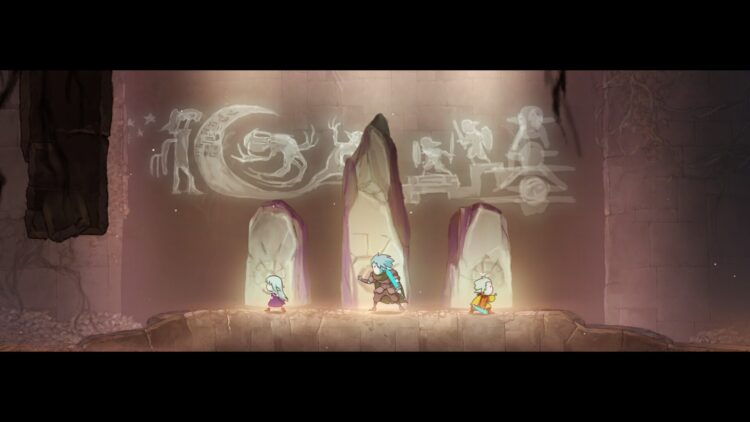 Short, but unique and satisfying despite some frustrating elements, Greak: Memories of Azur is a winning action puzzle-platformer with some of the best 2D visuals you can find.