We recently got the chance to ask some question of the GRID 2 team, namely associate producer Iain Smith and executive producer Clive Moody.

Covering everything from the gap between GRID 1 and 2, to new multiplayer components and improvements in technology, the following questions have been designed to give you as in-depth a view of the game as possible.

IncGamers: GRID 2 has taken a long time to arrive. During that period expectation has only gotten higher and higher. Are you confident you can meet those expectations?

Clive Moody:  We wouldn’t be doing it if we weren’t.  And of course, we have high expectations that we set ourselves too.  One of the main reasons we have taken our time with GRID2 was to ensure we could create a worthy follow-up. GRID broke new ground and set new standards, so we have to do the same with GRID 2, without losing sight of what made GRID great. Naturally our start point are the values and experiences associated with GRID’s core racing, each of which has been revisited from a design, gameplay and technology standpoint to either improve or completely refresh. It’s a big job.

IG: Given the amount of time between the first game and this one, how far has the technology you’re using progressed? Any areas you highlighted as essential to improve?

Iain Smith: Clive has already touched upon the reasons for the game taking a while to come to fruition, and of course tech is a key aspect of that. We want to make the next step in immersive racing and technology underpins that aspiration. For instance, we’ve vastly improved our audio tech, meaning we can be creative in the way we represent what a race driver hears whilst on the track. The same way that visually your focus is pulled towards the opposition cars and the track, a driver’s hearing will pick out the elements which are important to him, like the car right on his tail. Our audio system supports this now, in what we’re calling an audio depth of field. It makes a massive difference to the experience.

In addition, huge strides have been made with our handling model and the physics system it runs on. The system underpinning the entire game is sampling the feedback from the track to the wheels and car at 1000Hz. This means at high speed we’re updating centimetre by centimetre, not metre by metre. It’s big progress; you really feel the car and the track with this constant feedback, making it more intuitive without dumbing the experience down.

IG: Codemasters racing games have a history of borrowing technology and features from one another, are you implementing any of the advances made in the Dirt and/or F1 games?

Clive Moody: There is continuous sharing and collaboration across all of our titles, which is one of the real strengths of Codemasters Racing. Many of these are ‘under the hood’ improvements that whilst not necessarily being obvious to the player, ensure a smooth overall experience. GRID 2 is also making great use of the AI developed for both F1 and DiRT, but specialising and advancing it further for more ‘human’ feeling opposition specific to our race disciplines. With over 60 different driver attributes to play with, such as reaction speed, aggression, braking abilities, steering smoothness, we can really define a huge range of racing styles.

This is then taken this a step further by making these attributes dynamic, meaning they can change within races, depending on the situations that the driver finds themselves in. This level of realism builds the kind of rivalries you see across all forms of motorsport, and we think that really pushes things forward.

IG: Flashback is one the most successful additions to racing games this generation. Why do you think that is and what are your plans for it in GRID 2?

CM:  Before we created Flashback, racing games that tried to reflect reality suffered from the problem of big, spectacular crashes ruining your chances of getting a decent result. That’s a problem when you want your game to be, for want of a better word, fun. Flashback not only offered the player a second attempt, but also the opportunity to learn from their mistakes, to get better. And it looks pretty cool too. We’re not surprised it’s a feature that we’ve seen imitated across a wide range of racing games. There are some pretty big plans for Flashback in GRID2, in fact, a complete re-invention, but that’s something we will hold back details on for a future conversation.

IG: What format of progression are you aiming for with the single player?

IS: We can’t reveal too much about the player’s journey at this stage, but suffice to say we have big plans. I’m really excited to talk about it, when they’ll let me, as I see it as a big step forward. What we can talk about a little though, is the tiering of vehicles within the game and how that relates to player progress and increasing their skill level. When the player begins the game, they will be driving tier one cars.

That’s not to say they’re going to be dull family cars, we’re still talking 350BHP beasts; but their characteristics will be more manageable for new players. Once they start coming up against tier two opposition, players have the choice to either mechanically upgrade their cars to tier two to match up, or save their cash and buy something more appropriate. At every stage, players will be learning more of the nuances of driving skills to allow them to drive more unruly or powerful vehicles. 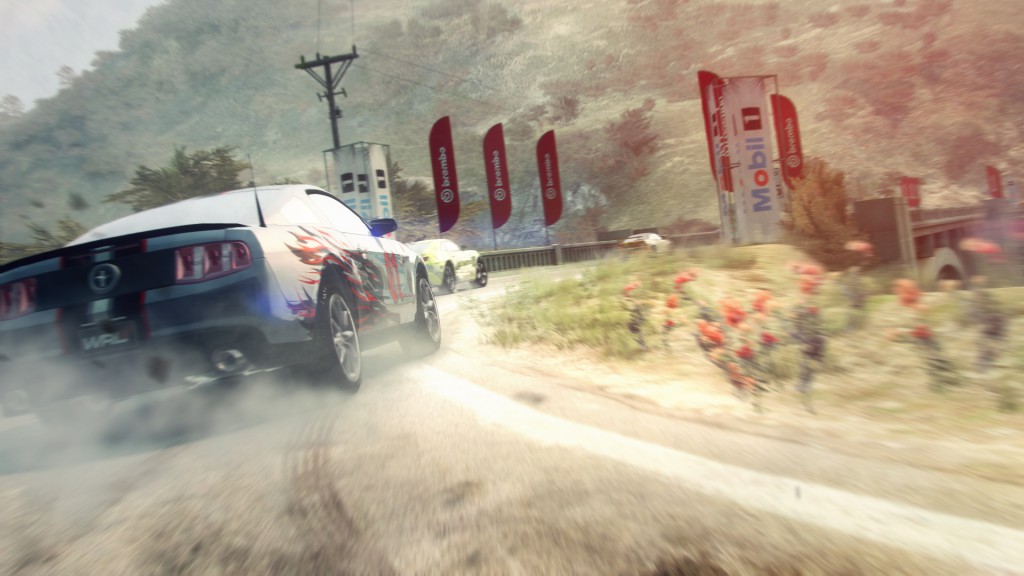 IG: How many event types are you aiming for and will single player and multiplayer events be the same or mutually exclusive?

IS:  As we’re still currently in development and pre-alpha, there are things which are still in flux, so a definitive number isn’t possible right now. However, there will be crossover between the types of race events you’ll see in multiplayer and single player. What’s exclusive to each is the player’s progression – online your progression is completely unique and independent to what you do in the single player career.

IG: More and more games are trying to blend their single and multiplayer aspects into a seamless whole. What’s your approach to multiplayer and will it connect with single player? Will multiplayer be the area of the game that provides the long term hook?

IS:  As mentioned, we’re making a bold move to isolate these and make them tailored experiences, as we think that players have different motivations and desires depending on whether you’re playing solo or in multiplayer. So we’ve taken the approach for GRID 2 that one size doesn’t fit all. For us, the multiplayer area is where players can really make their own choices and decisions. Whether that’s in personalisation of their vehicle, cosmetically or mechanically, or about how they spend their cash. How far they progress and the goals they achieve are things that are more up to the player too. Saying that, we’re implementing something to allow players to revisit aspects of the single player experience too – more to come at a later date!

IG: How is RaceNet being incorporated into GRID 2?

IS:  RaceNet has actually been in a beta format for some time now, so with the release of GRID 2 we’re actually looking to make the features which tie into the game and RaceNet’s general level of support much more prominent along the official release of RaceNet 1.0. RaceNet is going to underpin all of the online activity within GRID 2 and be an ever-present aspect. It’s not so much being incorporated as integrated. Again, more information to come later in the year.

IG: You’ve partnered up with Ken Block for the Dirt series, any similar partners (individuals/companies) on board for GRID 2 to provide insight from within the sport?

CM: We’re always looking to partner with great personalities and brands that fit our games’ vibes and GRID 2 is no exception. We’ve got some really big plans but currently we’ve nothing we can announce. Hopefully we’ll have more to reveal soon….

IG: There are few racing with the same mantra and direction of the original GRID, are there any particular games you see as major competitors in this space?

CM: We think we’re in a good place with GRID 2, with the likes of Burnout, Blur and Project Gotham no longer in the marketplace, sadly with some studio closures along the way. There’s some fantastic racing games still out there, that cater for every type of racing fan, but we’ve always seen GRID as sitting in its own space, between accessible racing and simulation and with GRID 2 we retain the razor focus on the immersion in the race day experience that sets us apart from other direct competitors.

The reception to the game at the Eurogamer Expo recently was very positive from the people who came and played it and it was great to see that our vision for the game being appreciated by so many people. Remember, we’re still nearly a year out from release, so we’ve only just scratched the surface of what GRID 2’s got to offer. We’ve loads more to talk about in the coming months.

IG: Visuals are always a strong point for Codemasters’ racing games. How far are you pushing them this time? Are you limited by the current generation of hardware?

CM: The visual fidelity and quality of GRID2 is another step up from previous Codemasters racing titles, with an all new lighting system that really grounds the buildings, cars, crowds and race-day periphery in to a cohesive scene. Of course, any hardware has its absolute limits imposed by memory and performance and we are undoubtedly pushing this very hard on current generation hardware. It’s hard to see how we could take this further, but then again, I usually say that after every game and our programmers and artists continue make improvements and genuine visual improvements.

IG: Do you have any plans regarding the Wii U and/or handheld platforms?

CM: GRID 2 is launching next year on Xbox 360, PlayStation 3 and PC, as we’ve already announced, but as you’d expect, Codemasters is always looking at new technologies and different ways we can entertain our consumers. We’re at a great time in the industry at the moment, with some fantastic platforms already in the market or about to launch, as is the case with Wii U, but we have nothing to announce beyond the platforms we’ve already confirmed for GRID 2. That’s our focus right now.