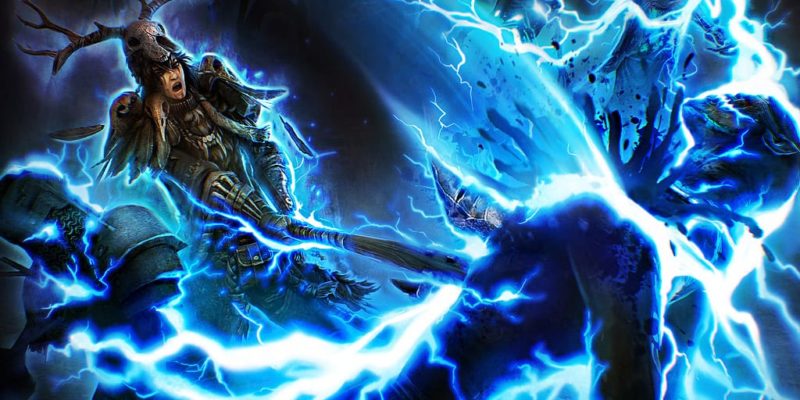 Crate entertainment has been teasing their next Grim Dawn Mastery for a while and today they introduce the Shaman as the next class to be added to the ARPG.

As the class title implies, this character is a force of nature and the Shaman will also be rather handy when duel wielding melee weapons. Crate describe the Mastery as follows:

““Hailing from the untamed northlands, Shamans were the spiritual leaders and guardians of their people. Claiming an astounding attunement to the wilds and their patron deity Mogdrogen, Shamans are capable of wielding the terrible forces of nature against their foes or even calling upon savage beasts to come to their aid. Shamans excel in the use of brutal two-handed melee weapons, but can easily adapt to other tools of war when conjuring their primal powers.”

“Shamans are untamed fighters capable of brutal strength and ferocity that would make most men take a step back and reconsider their chances; but that wild side is equally matched by their connection to the skies and the power of lightning storms. Shamans expertly combine the use of two-handed melee weapons with storm powers. Backed by their patron deity, Mogdrogen the Beast God, they fearlessly charge into battle with lightning surging through their fierce weapons, the scorched earth and corpses still reeling from the electricity coursing through them the only sign of their passing.”

The first skill details have also been revealed with Primal Strike which imbues the power of a thunderstorm on weapons, Stinging Swarm unleashes insects, Nature’s Boon sounds like healing ability, and finally Upheaval will shake the ground and release a shockwave when a strike is unleashed.

When is the Shaman arriving in-game? Crate say the Mastery will be available this summer with Build 2.

The Witcher 3 patch 1.07 coming in lieu of free DLC