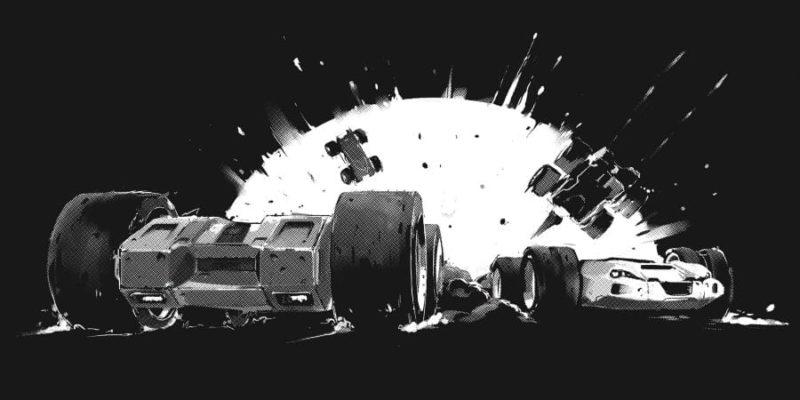 There have been many racing games that pushed the boundaries of driving. When I think about flying at insane speed, games like Track Mania, Hydro Thunder, Split Second, and Fast Racing Neo come to mind. Grip: Combat Racing takes hints from some of those titles, amping your driving experience to maximum levels. One thing that does stand out with the aforementioned games, though, is their ability to marry those tenacious experiences with a certain fluidity on each of their respective racing tracks. That is one of the biggest letdowns you’ll find throughout Grip: Combat Racing.

There are four different types of races to be found in Grip: Classic, Ultimate, Speed Demon, and Elimination races. Classic is your basic get-to-first-place race, while Ultimate throws combat into the mix. Elimination causes the last racer in the pack to disappear, and Speed Demon is a straight sprint with boost powerups. I didn’t include the combat arena here, as it’s mostly a Twisted Metal-style destruction derby. 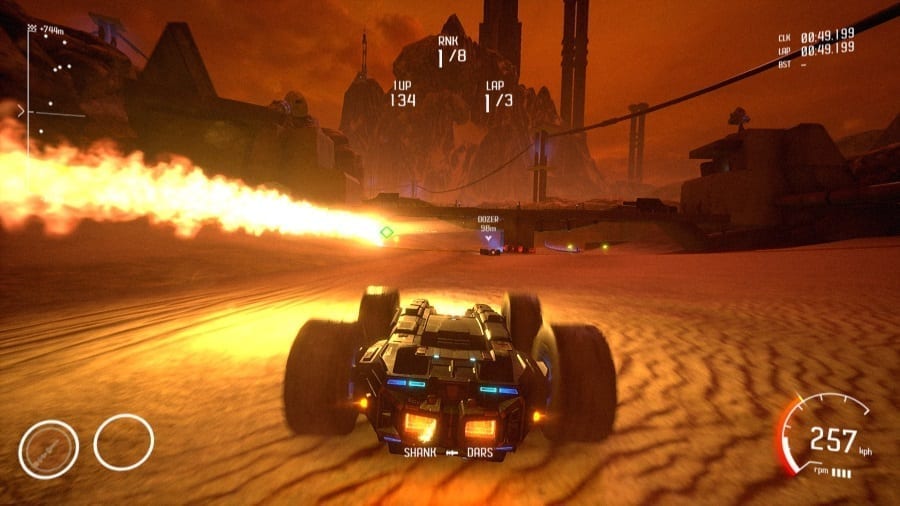 Your vehicle can be destroyed in some races. This also leaves you to wait 10 seconds for a respawn.

The game showed its best performance during the Ultimate Race sections. Here, you’ll need to deal more damage in order to be crowned the victor. There are a variety of weapons available, including homing missiles known as Scorpion rockets. These can be fired and targeted to the nearest car in front of you. However, shooting them while driving at high speeds often leaves the rocket crashing into your own vehicle. The Raptor machine gun is probably the most effective and accurate, popping off a string of bullets for a few seconds. Shooting this will cause the targeted vehicle to spin out of control.

Your car’s boost automatically regenerates as you play. You can also gain a powerup that will thrust you forward to the sounds of a space rocket taking off. One thing that I wanted so badly was for vehicle destruction with crashes. However, crashing into another vehicle with such boosts only brings your car to a dead stop. Most times, it won’t even cause an opponent’s vehicle to spin out of control.

At any given time during a race, you are clocking some world-blurring speeds. Your vehicle is double-sided, allowing you to fly through the air and land upside down, after which your view will revert to a standard view. This especially helps out when you can attach your car to upside-down roads that are above and to the side of you. It works great in most cases.

On the other hand, one of the biggest frustrations I had while playing came in the form of race flow. See, the level design is fairly ambitious. At times, when you nail the path just right, you’ll flip your car, land on a track that was previously above your head, and ride it out to victory. But, most of the time, these tracks are lined with rocks and other metal obstacles. Instead of keeping the flow moving, like in Track Mania or Split Second, you are instead hindered at almost every turn. Rock formations will launch you into the air only to wait seconds for your vehicle to fall. While there are ship controls that allow you to maneuver mid-air, they are useless when you are floating above the race like a rock shot straight up into the air. 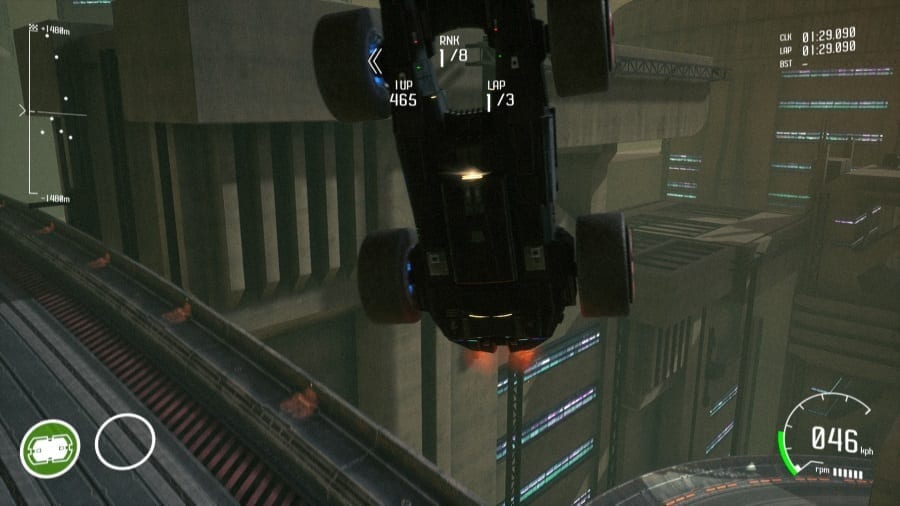 I did find that changing the cockpit view to get more of a street-level view kept me better orientated, which helped ensure I never really became dizzy. But, throughout the course of the game, I began to grow more frustrated with the level design as new maps become more complex.

I found the campaign portion of Grip to be a cumbersome experience. There is a progression system in place that allows you to unlock new vehicles, paints, tires, and cars as you level up. Experience points are delivered by completing races, with smaller points allotted for things like race times and other variables.

The system is separated into tiers, with usually three to four races within each one. On paper, the progression and campaign system might seem well-thought. However, playing through repetitive maps and races becomes a tedious task. I never really obtained a sense of accomplishment as each one was completed. It likely could have been cut in half, nixing some of the repetitive races, and still exposed you to the different modes and maps. 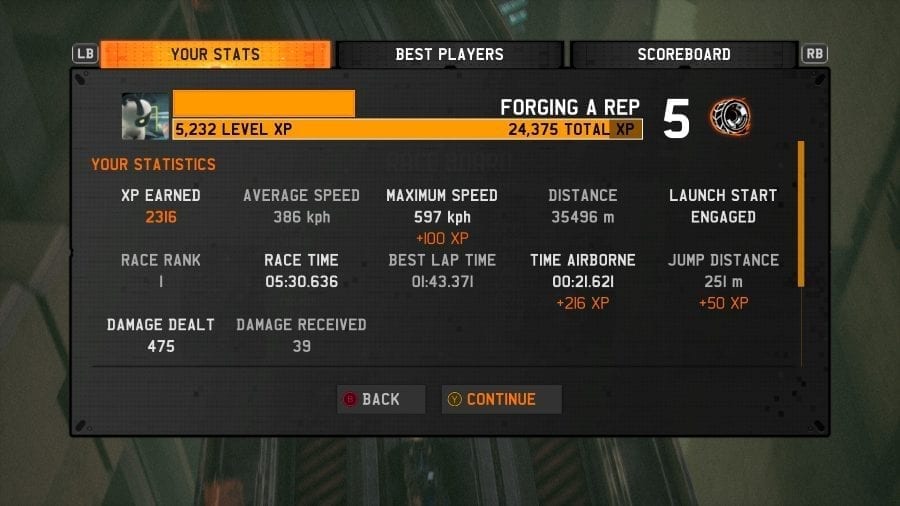 Although Grip: Combat Racing didn’t fully release until November 6, the game has been in Early Access since February of 2016. The online mode has been available for the last few days. It felt much better to race against real players instead of bots. Even so, I was surprised to see bots coming in first place, even with IRL players now in the mix. The AI in the game has an almost “do no wrong” design. Regardless of how sharp the turn, AI players still stay the course of the map. This becomes very apparent in circular races full of left turns. The AI is constantly flying at high speeds without error.

The overall design and visuals in the game are well-optimized. When I initially launched it, I noticed that the display resolution defaults to 720P. I decided to change the resolution to standard 1080P and turn all of the settings to max, moving backward if need be. The game kept a steady 60 FPS throughout my entire playthrough. Even with the scenery buzzing by and flying at Mach speeds, there was never a time where my frames deteriorated. I was overall impressed with its performance and its gritty visual feel. 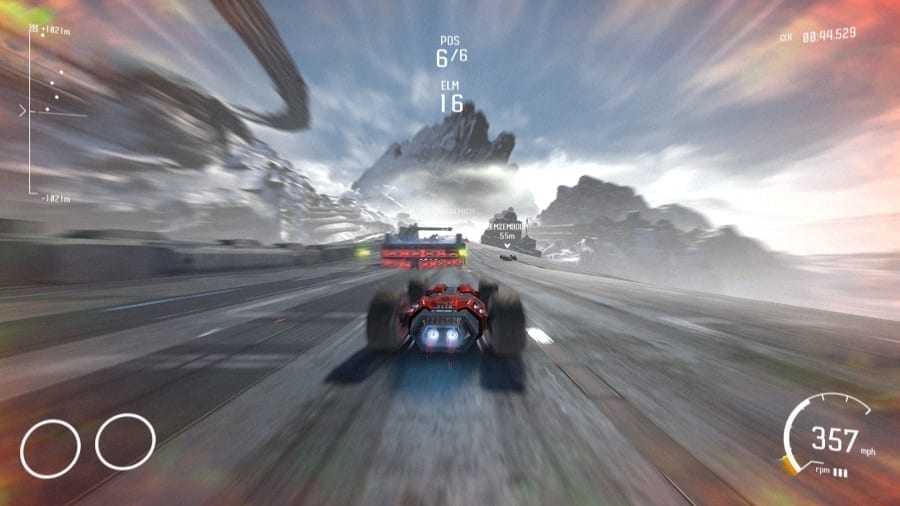 I wanted so badly to enjoy Grip: Combat Racing. The game is visually impressive and well-optimized given the general speed of the game. But there are many frustrating moments to be had within. Cluttered level designs may lead to your car being flung into the air, only waiting to fall to the ground before gaining your bearings enough to head in the right direction.

The varied race modes and weaponry are, for the most part, well utilized and welcomed. The campaign does present a grueling task of completing race, after race, after race for marginal unlockables. The online mode, on the other hand, offers far more to be excited about, especially with the opportunity to race against other humans and not near-flawless AI bots.

Although Grip: Combat Racing has shed its Early Access skin, some more time in the incubation chamber might have minimized some of its racing pains.

Grip: Combat Racing is a fast-paced experience that is sometimes hindered by its own level design. Online matches and game optimization are where it truly shines. The campaign mode, though, becomes more of a chore than something to celebrate.