Grand Theft Auto: The Trilogy — The Definitive Edition launched with a lot of problems. And that’s the nice way of saying it was a complete train wreck. But it was, and players were understandably pissed at Rockstar and Grove Street Games’ handling of the beloved trilogy. Rockstar had since responded, promising patches and returning the old PC ports back to its store. Today, that promised patch is upon us. And it’s a big one. The latest update for GTA: The Trilogy addresses around 100 graphical glitches for the game, improves stability, and even deals with that weird rain.

The update for the GTA Trilogy mostly addresses the graphics, but there are a few other changes. As mentioned, the update offers some stability improvements, which should help the game run better — in theory, anyway. Rockstar also added the cinematic camera, first introduced by GTA III. It’ll offer film-like camera angles as you drive, just in case you didn’t already know. Finally, the patch fixes a lot of misspelled words on signs and art throughout the games. There are other gameplay fixes as well, from collision to the radio.

But mostly, the update fixes a lot of graphical bugs. Notably, it addresses the weird, glitched rain in the games, which caused a lot of eye torture for a while. I can’t glean from the patch notes that the rain is fixed completely, but it at least makes it so rain won’t be seen in buildings or during some cutscenes. Each game got fixes for broken textures and particle effects. However, clearly the most important change is for the Tuff Nut donut shop in GTA: San Andreas. You may have seen the Reddit post where the shape of the nut got rounded for reasons unknown. Well, now it’s hopefully back to normal. 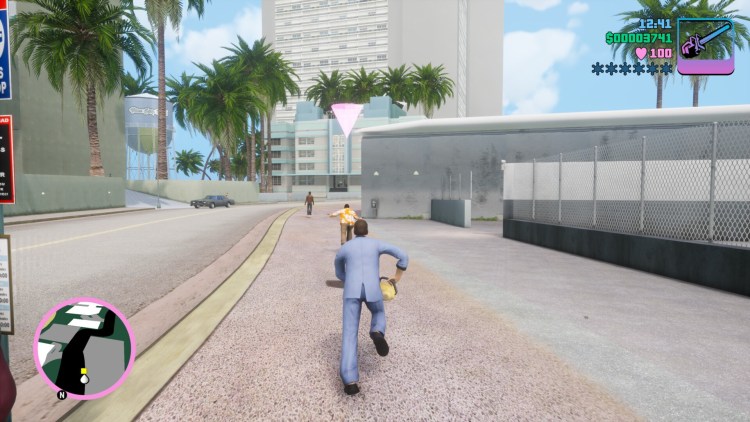 On the PC-only front

The GTA Trilogy update has some fixes for just PC players. It fixes a bug that prevented some from choosing Cancel or Confirm on the game over screen. You’ll also now be able to use special characters while making an account name. For those with ultra widescreen monitors, the patch fixes the in-game layout. There are some others, so get some tea and check out the full patch notes.