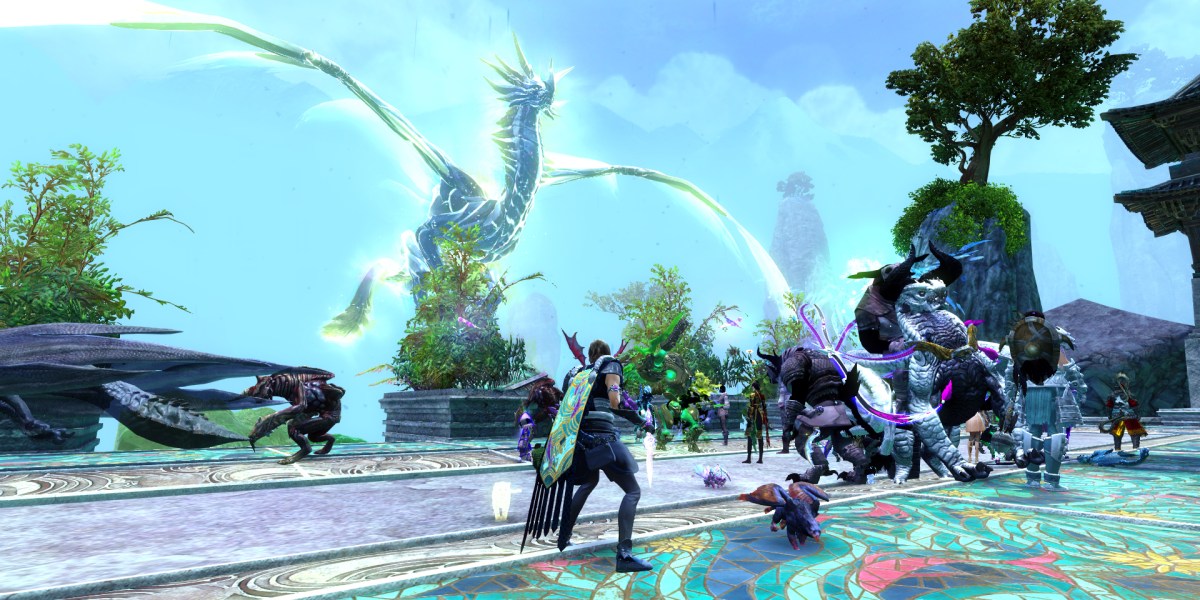 Ever since I heard players would be venturing to Cantha in Guild Wars 2: End of Dragons, I’ve been eager to return to the continent that first drew me into the MMORPG franchise. A lot has changed in the 200 years that have passed in-game, but the excitement and wonder I felt the first time I arrived in Cantha are still there. If anything, the continent has become more vibrant and fantastical.

Along with a new continent of content, End of Dragons also introduces some new features to Guild Wars 2, along with nine new Elite Specializations. The Skiff is your newest mode of cruising the waterways – solo or with a crew. It’s not the only mount you’ll be able to unlock: there’s also the two-person Siege Turtle. Fishing has also been added to Guild Wars 2. It serves the dual purpose of giving you a break from the bustle of the zones and allowing you to gather some new materials. Saving the best for last, you’ll also be given a Jade Bot soon after landing in Cantha. It gives you new ways to explore, as well as some handy perks.

The story of End of Dragons picks up after the events of the Icebrood Saga. Jormag has been dealt with and, although there is the looming threat of another Elder Dragon somewhere in the world, Tyria is in a rare state of peace and balance. This is soon broken when the Aetherblades lure you and Aurene into an aerial battle that results in Aurene’s power being drained by a mysterious machine, and both of you crashing in Seitung Province. Welcome to Cantha.

Wish you were here

As I mentioned in my preview of New Kaineng, Cantha is one of the most inviting locations Guild Wars 2 has ever had. Particularly, Seitung Province and New Kaineng City. They’re bright, buzzing with activity, and they provide you with a playground to experience all the new End of Dragons features. 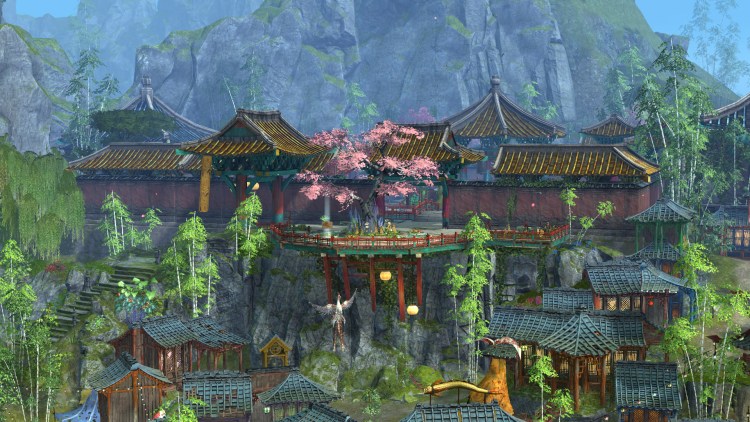 The story often took a backseat as I wandered around the different points of interest in the different zones and got caught up in the dynamic events that make the world of Guild Wars 2 feel so alive. The game has always done a superb job rewarding you for your exploration with achievement points. And End of Dragons is no different. Getting lost in Cantha is an absolute pleasure.

It’s fortunate that ArenaNet has done such a good job building the zones and filling them with distractions, because I thought the story was a little short. You’ll finish it in under a week – just a few days if you don’t get too sidetracked. Having said that, I do think this is an excellent conclusion to the Guild Wars 2 narrative. It’s heartwarming, it ties everything together well, and, of course, it ends with an epic battle. I won’t spoil anything for you. But once I finished the story and the final zone’s meta, I was left with a sense of accomplishment — and a feeling that it was time to move on.

There are nine new Elite Specializations in Guild Wars 2: End of Dragons – one for each class. I spent a bunch of time on the new Guardian Elite, the Willbender. It’s a lot of fun. The mobility and dual swords look like they’ve come straight from an anime. But my favorite new Elite Specialization is the Mesmer’s Virtuoso. I have always loved the Mesmer class in Guild Wars 2, but it’s never been an easy class to play in PvE content. The Virtuoso changes that. It’s an absolute powerhouse with plenty of utility to keep it dodging dangers. The major change is that you create illusionary daggers instead of clones. It makes combat a lot more direct. I had so much fun experimenting with and improving my Virtuoso build, that I honestly don’t feel the need to ever play another class in Guild Wars 2. And it’s just as much fun in PvP.

If the other Elite Specializations are as well done as the Virtuoso and the Willbender, there will be a lot of happy players running around. One that could be a cause for concern is the Specter, the new Thief Elite. It turns the traditionally damage-focused class into a support class. That’s probably not something Thief players wanted to see. Personally, I think it’s creative and I love the concept.

Guild Wars 2 is an interesting MMORPG because it doesn’t have any form of vertical progression. Once you reach the maximum level of 80 and have crafted or acquired Ascended level gear, you’re at maximum power. That puts a lot of pressure on the game’s horizontal progression systems to keep you entertained and coming back for more. 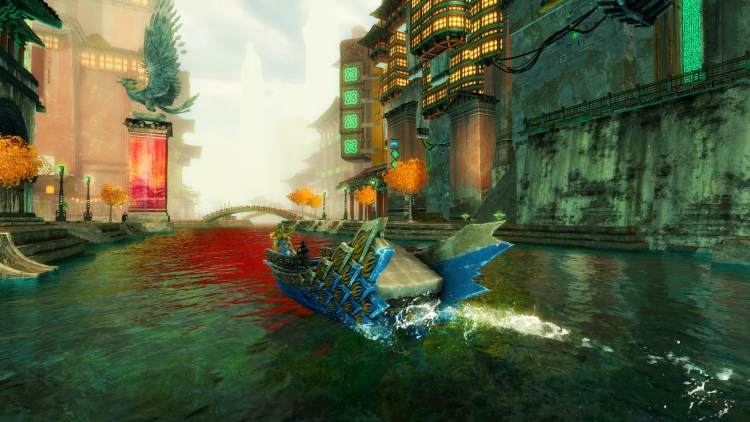 I’ve always had an issue with the way the Guild Wars 2 Living World content has tackled horizontal progression. I think it left the game feeling segmented. Each zone gave you a new mechanic that you can empower through Masteries. However, these mechanics were limited to that zone. It didn’t build on the game, but rather fragmented it. That is not the case at all with End of Dragons (or the previous expansions for that matter). The new features and mechanics add to the game. They give you goals to pursue, skills to unlock, and add value to your gameplay experience. They will never be a fragment of the game, but always a part of the whole.

Two of these horizontal progressions are Fishing and the Skiff mount. They are nice additions, and are particularly enjoyable when you’re playing with friends.

However, the Jade Bot is the real shining star of End of Dragons. It’s adorable, functional, and empowers your character a little. Progressing down the Jade Bot’s Mastery line is well worth your time. All of its features are useful. The Gliding Boost, the free waypoint you can set anywhere, and the self-revive are particularly amazing. Ignore all the other Masteries until you’ve unlocked everything on your Jade Bot. 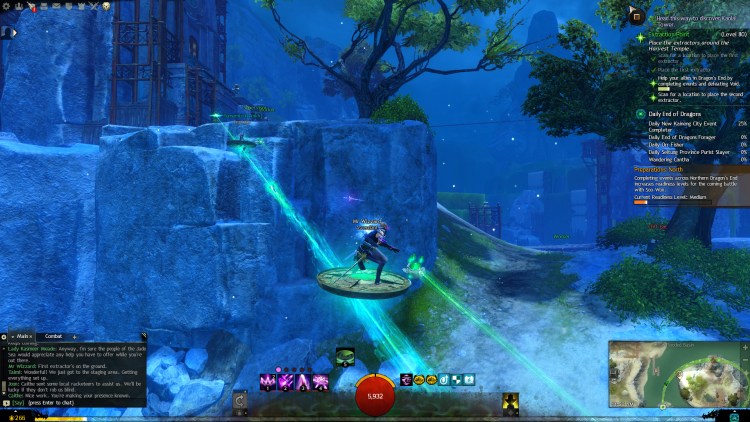 On top of that, the Jade Bot allows you to use the ziplines found around Cantha, as well as the nodes that will provide you with offensive or defensive buffs. The Jade Bot also has slots where you can install a Power Core, Module, and Service Chip. In one of the streams leading up to the launch, ArenaNet talked about how these could provide your character with numerous perks, like increased Vitality and improved Mount speed.

I love the idea of this system. Unfortunately, the main End of Dragons narrative doesn’t give you much exposure to it. I finished the story without seeing more than the first Power Core and Module I was given. And that’s a shame, because I think the system is a strong drawcard for players. If the parts were more readily available, you would actively seek them out and get excited about new ways to empower your character and bot.

There are only four new zones for you to play through: Seitung Province, New Kaineng City, The Echovald Wilds, and Dragon’s End. As I said, that won’t take you long to get through if you just play the story. However, there is a lot more to enjoy and overcome in these zones. Each one has a Strike Mission, which is a considerably tougher version of a boss fight from the story. You’ll need to team up with some capable allies to overcome these. There is undoubtedly at least one raid in Cantha’s future, too. 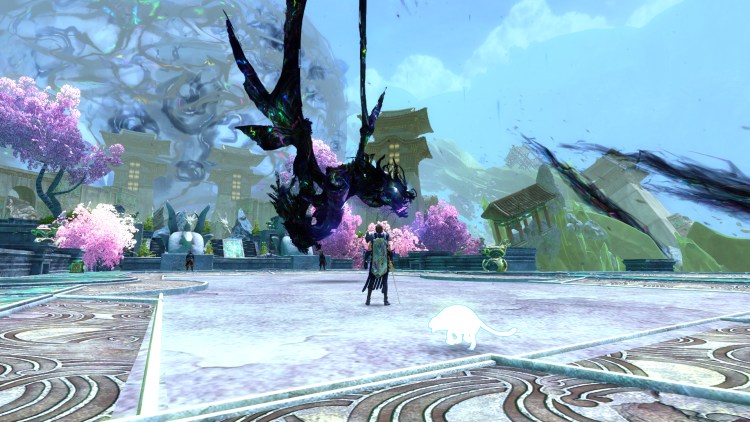 There are also some challenging map meta events that may take you a few attempts to beat. The Dragon’s End meta is a lengthy process that will take you a couple of hours working with a ton of people to complete. It reminds me a lot of the Dragon’s Stand meta from Heart of Thorns, but nowhere near as oppressive or frustrating. Unless you lose. Then it’s frustrating, but still a lot more enjoyable along the way. And the conclusion is grand.

Beyond the End of Dragons endgame activities, there are also plenty of cosmetics, collections, and achievements to hunt down. Guild Wars 2 does a superb job of hiding secrets around its zones. Once you finish the story, these are a wonderful way to uncover more about the world and its characters. You’ll even get some rewards for some of the more major achievements you complete. For example, the “Honorary Deloqua” title you get for visiting sites with Marjory that were important to her sister. 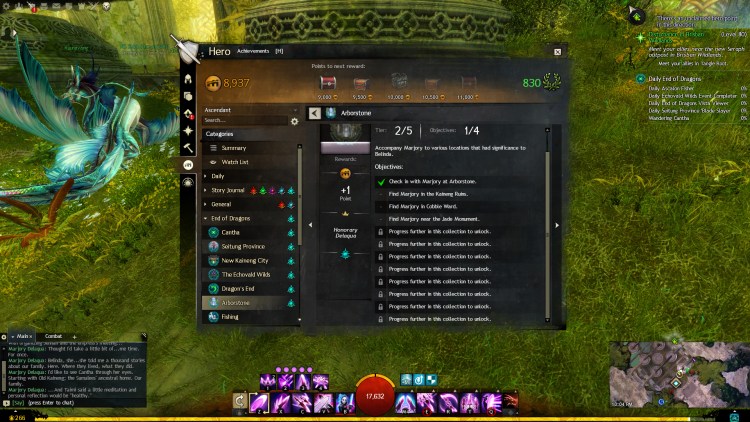 Each zone also has a unique backpack skin you can unlock when you complete enough of the area’s achievements. Plus, each Elite Specialization has an Ascended weapon you can unlock by completing certain tasks. This is the kind of horizontal progression that will turn Guild Wars 2: End of Dragons into hours of adventuring.

If that doesn’t excite you, I think the conclusion to the Dragon Cycle story alone is enough to warrant spending the $29.99 USD on End of Dragons. It allows you to spend some more time with the characters you’ve come to love, as well as meet a few new ones who will become fast friends. And in the end, you’ll leave with fond memories of your time in Cantha. 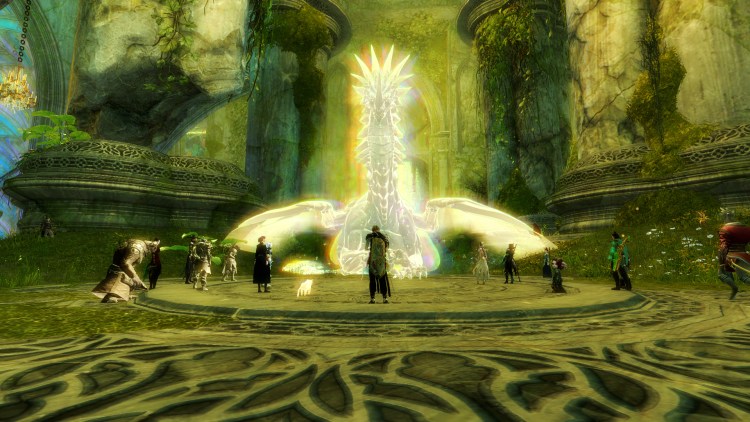 There was a lot riding on the return to Cantha in Guild Wars 2: End of Dragons. It's an iconic location steeped in the franchise's history. Fortunately, the latest expansion delivers an experience worthy of the hype. The end of the Dragon Cycle narrative will challenge you, teach you exciting new skills, and leave you feeling content. The story isn't overly long, but there are plenty of activities to keep you busy for many hours around Cantha.

Disgaea 6 Complete is coming to PC via Steam late June